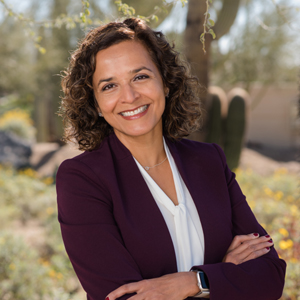 Politics, like the practice of medicine, is public service, says physician and cancer researcher Hiral Vyas Tipirneni, a Democrat who’s on the November ballot of Arizona’s Sixth Congressional District, which has been a Republican stronghold. Dr. Tirpineni may have what it takes to flip her district, as we see in this interview with Khabar.

Dr. Hiral Tipirneni speaks to me of her birth, and I think of the strange contingencies that shape American politics.

“My parents are from Gujarat. The reason I was born in Mumbai is because traditionally, in India, a woman goes to her parents’ house to give birth. My maternal grandmother passed when my mom was very young, so she went to her older brother’s home to deliver me and my brother.”

[Left] Born in India but raised in the U.S., Dr. Hiral Tipirneni has lived in Arizona for almost 25 years.​

Three years later, Tipirneni’s parents migrated to America. Fast forward several decades, to 2020, and their daughter, a former Phoenix ER doctor, is battling for a House seat from Arizona’s traditionally Republican Sixth District (population roughly 750,000, predominantly white, with Indian-Americans, according to Tipirneni, making up “less than 3 percent.”) Her run is seen as pivotal to the Red to Blue campaign of the Democratic Congressional Campaign Committee, which seeks to capitalize on suburban disaffection with Trump in districts like the one where Tipirneni lives.

Phoning the candidate was similar to Zooming her. A pleasant voice instructed me to wait until the “host” lets me in. When Tipirneni finally got on, she did not seem entirely sure who I was. She had most likely been talking on the phone or Zooming with one of the many people attracted to her campaign, hitched to the digital conveyer belt of the new campaigning.

“Obviously, this is not an ideal way to run a campaign,” she said good-naturedly. “We would much rather meet folks personally, hear their stories, but we’ve been having to connect through Zoom, Skype, Facebook, Instagram, and texting. We are grateful for that. We don’t always love doing Zoom after Zoom after Zoom, but we are getting used to it.”

As a doctor in the middle of the coronavirus pandemic that has mauled Arizona, Tipirneni brings to her campaign a perspective that puts her hopelessly at odds with her opponent, Republican Congressman David Schweikart.

“I am in favor of using data and science to guide us. He stands with President Trump and Governor Ducey who disregard data and science and whose judgements are based on politics and partisan leanings. President Trump came to Arizona when our surge was beginning and our numbers were spiking. He held a rally in a closed building, three masks among them all, that Congressman Schweikart attended. In hospitals, people were dying and our healthcare workers were inundated. The rally was reckless, irresponsible and based purely on partisanship.” 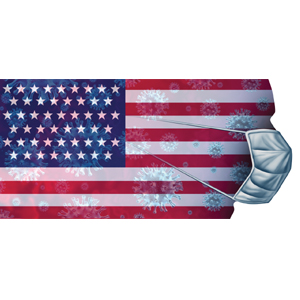 With Arizona’s Emergency Rooms presently overwhelmed, I try to steer our conversation beyond the data and science paradigm she is most comfortable with, towards her own expertise as caregiver with patients under extreme duress. She reminds me she hasn’t worked in Emergency Rooms for a while (she presently does cancer research). I sense she would rather not talk about herself, would prefer to stick to the issues, but she obliges her interviewer.

“Having worked as an ER doctor, I understand the impact this is having not just on families with loved ones who are dying, but on healthcare workers. I am still in touch with many of them. They say how heartbroken they are to see families who are not allowed in to be with their loved ones because of infection. We simply don’t have adequate PPE to accommodate them. As professionals, we are there, and we do what we can, but after a while it takes a heavy psychological toll on healthcare workers.”

In broader terms: “The pandemic has highlighted issues like paid sick leave, paid family leave, as well as the need for healthcare coverage for every American. It has exposed the fracture lines and weaknesses of our healthcare system and our economic system.”

This marks the second time Tipirneni is running for a House seat. In 2018, she ran against Debbie Lesko in the neighboring, Republican-dominated Eighth Congressional District, and with the help of crossover Republicans and moderates, narrowly lost. I happened to come across a campaign ad of hers at the time that focused, uniquely, on the pronunciation of her name. People were asked at random to pronounce “Hiral”, and each, without exception, managed to butcher it. Only a dark-skinned little girl got it right, explaining matter-of-factly, “She is my mother.”

I reminded Tipirneni of the ad, and she laughed. “A friend came up with the idea. We noticed that everyone who reached out to me had difficulty with my name. At a house party, my friend went around to everyone and recorded each one’s version of Hiral. In the end, she asked my daughter, and that was the ad.”

“So, you really felt a bit of gentle, ethnic consciousness raising was necessary at the time?”

“Yes. It was a way of saying to people, ‘I may have a different name, but we all share common ground.’ Some people at first saw a woman with brown skin and an unusual name trying to represent a district in Arizona.
But the more we had a chance to talk about what our family issues were, what our concerns were, they saw we had way more in common than they expected. They saw a woman who lives in their community, who cares about it. Someone who is a physician. Someone who they can relate to. I have lived in Arizona for 24 years and raised my family here. I am no different from anybody else.”

Our conversation turned inevitably to November and voter safety. Tipirneni was emphatic in stressing that voters should not have to choose between worrying about their health and voting, as was the case in the Georgia and Wisconsin primaries, where voters were forced to stand on long, slow moving lines in the middle of a pandemic.

Arizona, she related, found a solution to the dilemma that sounded very much like a political miracle story, a contemporary American fable. In contrast to the roiling partisanship that keeps large segments of our legislative landscape in paralysis, Republicans and Democrats compromised on a major issue.

“Our Secretary of State (Katie Hobbs - Democrat) tried to turn this into all vote-by-mail election. Our governor was not supportive of that, nor was the state legislature. But they tried to accommodate us by increasing the registration for early voting and adding the option of one-time voting by mail. The people who get their ballots in the mail are signed up for a program called PEVL (Permanent Early Voting List.) The Republican compromise allowed people to be on that voting list for this entire cycle, which includes both the primary and the general elections in November.”

“What,” I asked Tipirneni, “made you leave your respectable line of work to go into politics?”

She laughed readily, as if she’d been asked that before. “Politics is often seen as being dirty, but it’s actually public service. It’s putting yourself out there to serve your fellow Americans, being their advocate, serving them in their darkest hours. As I tell people, I am going from one row of public service to another. In a way, it’s like medicine: you need to understand all the issues people face. Issues like economic disparity, poverty, addiction. In politics, you are just serving more people than in medicine.”

Robert Hirschfield is a New York-based freelance writer whose work has appeared in Outlook India, Sojourners, The Jerusalem Report, and Matador, among other publications. His debut poetry collection, The Road to Canaan, was published last year.