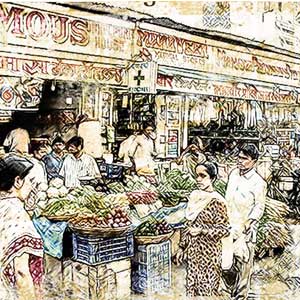 “As I weep for the death
of mom-and-pop stores in Chennai,
I witness the demise of the
brick-and-mortar stores in the U.S.
One after another—Blockbuster, Mervyns,
Hollywood Video—they all came tumbling down.”

The melodious voice of M.S. Subbulakshmi sails through the air and gently wakes you. Your eyes get used to the mildness of dawn, while the sweet aroma of filter coffee fills your nostrils. The front porch of every house is sprinkled with water and decorated with beautiful kolams. These wonderful creations are the work of talented women who deftly hold a pinch of rice flour between their thumb and index finger to produce extraordinary art. As you walk down the street, you eye these intricate designs and make a mental note of the artist of the day.

The vegetable vendors soon make their appearance. My mother would scurry out on hearing Lakshmi’s booming “Amma, … kai (vegetables).”

“Lakshmi! You are late as usual. When do you expect me to start cooking? You must have gone to the third street, sold all your fresh vegetables and now you come to me to get rid of your unsold stuff.”

“Amma, don’t say that. You are always my first customer. Look at the beans, they are so fresh and green, and it is only 10 rupees a kilo.”

“What! Are you trying to swindle me? I will give you no more than 7 rupees. If you don’t want that, go ahead and leave. I will get it from the next vendor.”

“Aiyyo Amma, why do you say such things? Here, take it for 8 rupees.”

My mom and Lakshmi would stage the same theatrics almost every morning. The dialogue would differ but the cast and the stage were the same.

But on days when Lakshmi was really late, my mother would worry, and pace up and down the house waiting for her. She never got her vegetables from any other vendor. When Lakshmi finally showed up, Mom would burst into questions.

“What happened? Did your child’s fever run up yesterday?”

“Yes, Amma. I was awake the entire night. He was coughing up so much phlegm. I have left him with a neighbor.”

“Here, take 50 rupees. Take him to Doctor Murugesan immediately. Poor child, he just recovered from mumps last month.” Half a bottle of Horlicks would then change hands.

Was it the same person who haggled hard for two rupees?

This was the Chennai I remember. The vendors and the people they served had a unique symbiotic relationship. The entire street rallied to help the daughter of a milkman get married. My neighbor paid a year’s school fees for the newspaper boy when his father was out of work. When the old man in the corner house  stumbled and fell in the temple, the owner of the medical shop across the street was the first one to recognize that it was a heart attack and rush him to the hospital. Back then we did not need Mambalam Times to keep in touch. Vendors were our Katie Couric and Brian Williams. The newspaper boy promptly brought news of the burglary three streets away. It was perfectly okay for someone to tell a neighbor, “The flower lady told me that a boy from Canada was coming to see your daughter. My first cousin’s son lives there. If you need to do a background check let me know.”

Changes in the last ten years have been rapid and dramatic. Electric percolators have replaced traditional stainless steel (called “ever-silver” in Tamil homes) coffee filters. People no longer draw elaborate kolams butinstead paste stickers with traditional designs on their front porches. But the one change that saddened me the most was the demise of the mom-and-pop shops. Tears welled up when I saw the corner shop—Murugan Medicals—being torn down. The street vendors and the small shops that added color to the city have given way to chain stores from several large corporations. Big Bazaar, Reliance, and Nilgiris have eaten up every smallgrocer in town. The uniformed staff in these stores will not chat with their customers. All you hear from them is a programmed “Did you find everything in the store okay, madam?” or “Bread is in aisle three.” A bond that held us together is broken.

As I weep for the death of mom-and-pop stores in Chennai, I witness the demise of the brick-and-mortar stores in the U.S. One after another—Blockbuster, Mervyns, Hollywood Video—they all came tumbling down. To search online for Ratatouille is much easier than scanning the aisles in the video store. And why make a trip to the store when Amazon sends it right to your doorstep? In his wonderfully written article in San Jose Mercury News, Chris O’Brien remarks: “It’s a strange feeling to watch the end of an era as giants like Blockbuster and Barnes and Noble fade. Their ability to crush local independent stores prompted soul-searching about the homogenization of our culture, pangs about the big shifts underway in the economy and mourning over the loss of something that made communities unique. As the people selling us things have become ever more physically removed from our daily lives, we are growing even more emotionally detached. Our loyalty is now paper-thin."

As we click our way through everything from movies to groceries, I wonder if we are becoming an increasingly isolated society. Our kids have very little interaction with anyone other than close friends and relatives and that, too, mostly on Facebook and Twitter. But it is hard to ignore the conveniences of shopping online. Everything has a price, and so do these  conveniences.The more we click, the lesser the human interaction. As you dump your clothes in a blue bag in your office break room for the web-based dry-cleaning service, you remember that there was a time when you knew the dry-cleaner by her first name. You knew that her father was held in jail in a forest in Vietnam during the peak of Communist atrocities. You knew about her brother’s death. You knew the struggles that she went through to get to this country and were proud of her success. You always went to her even though the new dry-cleaners that opened across the street had lower prices. But, the convenience of dropping off dirty clothes and picking up crispy clean clothes right at your office doorstep is hard to resist. We will never know the stories behind the blue bag and it does not matter if the blue bag company is replaced by the green bag company. The charms of local stores and the connections you had with their owners now belong in the pages of history.

That said, the Internet in some ways has freed us from the clutches of corporate giants: we can choose our products and vendors. A techie drummer is able to make a living by selling an iPhone tabla app to music enthusiasts all over the world. Buyers in Europe purchase eco-friendly plates made from the leaves of areca trees in south India. My friend buys her sweaters from a 70-year-old grandma who runs a boutique from her living room. In a sense the mom-and-pop shops are back on the Internet minus the interaction with people. A full circle perhaps?

Meanwhile, Lakshmi’s booming voice is no longer heard in the streets of our neighborhood in Chennai. She now sweeps the floors of a Big Bazaar outlet for a living; she just couldn’t compete with them on price. As for the newspaper boy, no one has seen him around lately. But I did get a friend request on Facebook from someone with the same name.

[Sujatha Ramprasad is a computer professional and a freelance writer.]