Perspective: Evolving Role of Father in the Family 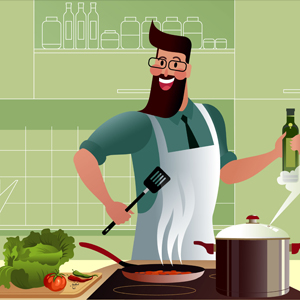 Reversibility of parental responsibilities will be the best insurance for happy families in our times.

The question that has long plagued my mind is: how did dads get distanced in the first place?

A scenario that is often played in most homes is this: when a child at home misbehaves, a mother does not punish him directly but threatens that she would report his act of misdemeanor to his dad when he comes home. Thus, a mother manages to exonerate herself as an innocent bystander and establishes father as the punishing authority. The father returning home after a day’s work, exhausted and frustrated, imposes a punishment often far outweighing the seriousness of the child’s mischief. These kinds of scenarios seem to have helped develop the stereotype of a distant, dreaded, and even authoritarian father. Sudhir Kakar, a great Indian psychoanalyst and writer has elaborated on how fathers are getting further from families.

There was a time when women had no privileges and they relied on men to keep the house in order. The man was the breadwinner and the woman was the bread maker. Now, as women join men in the workplace, there are two breadwinners in most families necessitating two bread makers. This also applies to all other household work. The whole family, therefore, must illustrate teamwork to run itself efficiently and harmoniously. A lopsided burden on one person while the other person becomes a burden is unhealthy and untenable.

The dynamics, therefore, need to change and adapt accordingly. The altered status demands a power shift. The roles played by both the parents demand interchangeability. Now, the father could be fixing food for the hungry child or doing the dishes while the mother helps with the school homework.

With both parents occupied with work, some fun time for outdoor and indoor activities for the whole family during the weekends should also be on the cards. The goal to be achieved, although cumbersome, is to promote happiness for each member of the family. This can only be achieved by comprehensive planning. Discretion applied in TV watching, newspaper reading, and telephone time can free up some extra time. Both parents have to be available at different times for different functions.

And yet life throws some challenges when just one parent is left shouldering all the burden. This could be due to divorce or if one parent passes away. I remember meeting a lovely Indian family of four—a husband, wife and their two small children—in Augusta, Georgia. I was shocked to hear soon after that the lady had died suddenly, leaving the father with an unforeseen task of bringing up the two children. The father braced himself for the challenge and decided to raise the two small children all by himself, playing the dual role of a father as well as a mother. Now the children have grown up to be dependable, happy adults. I remember this illustrious father on every Father’s Day. He handled an unforeseen challenge with success.

Another time that I remember is when a mother found herself in a similar predicament. Several years ago, I received a call from a Church asking for my help since one of their members, a converted Hindu Christian, had committed suicide when caught in a financial quagmire. The scene that I came across on reaching this family’s home, I will never forget for the rest of my life. The lady of the house, along with her three children, was crushed by this cruel tragedy. She was exhausted, numb and bereft of any sense of direction. She also had no previous work experience. By persistent inquiry, I could gather from her that she had worked as a nurse assistant when very young. Soon I could get her a job in that capacity in my hospital. When I met her at a shopping center some ten years later, I could not recognize her because of how drastic-ally she had changed. In that time, she had cleared all her exams and was now a certified nurse working in a hospital. Her children, too, were all well placed.

The survival of the fittest theory by Darwin says that the fittest are not those who are the strongest but those who are most adaptable. In these ever-changing, unpredictable times, we cannot leave our children playing a game of chance if disaster strikes. Only a combined mode of protection and prevention of problems will provide insurance and assurance. Reversibility of parental responsibilities will be the best insurance that money cannot buy. It will also prepare our future generation when they grow up and face challenges.

Even when nothing inadvertent should happen in life, what a picture of evolving values it would be to see a mother grilling food outdoors, while the father is feeding the family and doing the dishes, children cleaning up the place when the food is finished, and finally all coming together to watch TV. The role revers-al on a day-to-day basis will draw a father deep into the family system, giving irreversible joy to all in the family. One can imagine a time when instead of Mother’s Day and Father’s day, we have a single Family Day!

Dr. Bhagirath Majmudar, a retired Emeritus Professor of Pathology and Obstetrics-Gynecology, Emory University, Atlanta, Georgia, is also a Sanskrit Visharada and Jagannath scholar, the highest academic honor in Sanskrit. As a Hindu priest, he has conducted about 400 weddings, many of them interfaith. He is a poet, philosopher, Vedantist, actor, and playwright. He can be reached at: bmajmud1962@gmail.com. For general comments on the article, please write to editor@khabar.com.