COVID-19  In-depth info for Indians in Atlanta/Georgia. Click here
Home > Magazine > Features > Perspective : A Day of Infamy, and the Road Ahead

Perspective : A Day of Infamy, and the Road Ahead 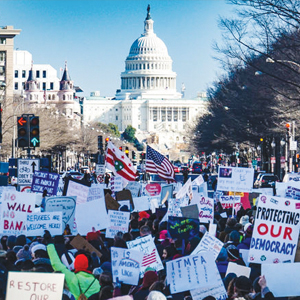 “Trump Incites Mob,” exclaimed The New York Times. The Wall Street Journal left out “Trump” from its headline (“Mob Storms Capitol”), but The Washington Post had no problem adding it in front of the same headline. Some outlets simply and bluntly said, “INSURRECTION.” A few publications abroad called it “Anarchy in the U.S.” and The Times of India dubbed it “Coup Klux Klan.” Last month’s deadly assault on the U.S. Capitol by armed rioters—stoked by a furious president who lost his bid for reelection—was the shocking climax of the Trump era after four tumultuous years.

Even President Trump’s worst critics, his daily detractors, the ones who hated everything he was and stood for, could not have predicted the end that came on January 6. After losing the general election, after losing the two Georgia senate seats, on the heels of the vote to seat the new Congress, the deluded, narcissistic pied piper led the most extreme and unhinged of his followers to do the unthinkable—to storm the People’s House in a last bid effort to prevent what they have been deluded into thinking has been a full-scale stolen election. As the debacle unfolded, one saw the moment at which Trump killed every chance for a legacy of any kind, of future influence, coattails, any power whatsoever. Instead, he ushered in a GOP that’s riven in two, torn apart between the last of the Trump believers (the majority of his supporters denounced what happened) and the rest of the party, which includes the establishment. In short, it’s a shambles.

Indeed, as Trump’s rhetoric escalated alarmingly in the days building up to the debacle, it is these moderate GOP voters who had already started peeling away, depressed and choosing to stay home instead of vote in the Georgia runoff election—to the tune of over a hundred thousand votes less than in the general election only a month ago. It was said that Trump’s final rally in Dalton, his swansong, already had an air of loss hanging over it.

So let’s turn to that other political earthquake that happened just before the Capitol riots—the stunning wins of John Ossoff and Revered Raphael Warnock, making them the first two Democratic senators to win Georgia since 2005. Warnock and Ossoff are Georgia’s first African American and Jewish senators, respectively. Let’s first give credit for this historic turnaround where it is due—to Stacy Abrams, who worked tirelessly since losing her bid for governor, in building an unbeatable machine to ensure that every last possible Democratic voter was found, registered and had voted. About 800,000 new Democratic voters were registered since her loss. Even in the short period between the election and the run-off election, the Democrats made historic efforts to reach minorities and ensure their votes. Consequently, Asians, Hispanics and, of course, African Americans voted in historic numbers and percentages compared to previous run-off elections. In addition, Ossoff and Warnock ran smart, efficient and extremely well-funded campaigns that presented them together as a winning team with ideas that resonated, compared to the disorganized, out-of-touch and uninspiring Loeffler and Purdue campaigns, which were already plagued by questions of unethical stock trading. We’ve already talked about the dispirited Republican voter who chose to stay home rather than come out and vote. A great responsibility for the loss lies with the pied piper, who in his own special, shameful way went after those Georgia Republicans who had supported him in the past—Brian Kemp, Brad Raffensberger and anyone else who he saw as not being with him. Nationally, in his final scorched earth strategy, he even went after his most faithful lieutenants. GOP-haters love to abhor Mike Pence and Mitch McConnell, but for a leader—any leader—to viciously turn against those who had served him and his party tirelessly for four years is reckless nihilism.

And now, Kamala Harris has been sworn in as the first female and first African American and Indian- American vice president. The Democrats control all three branches of government again, and with the Senate at a 50-50 split, VP Kamala Harris, who is also the president of the Senate, will play a prominent and critical role as a tiebreaker. The avowed agenda is ambitious while the challenges, including finding an end to the pandemic and saving the economy, are steep.

Political scientists find that many of the old adages—politics makes strange bedfellows; a year in politics is a lifetime—often come true in real life, which is unpredictable indeed. Political scientists are famous for not making predictions and hedging their bets. Take, for example, the fall of the Soviet Union, which nobody saw coming, much less wrote about. However, I’ll make this prediction with great certainty: there is no political return or revival for Donald J. Trump.