By Vivek Wadhwa and Alex Salkever 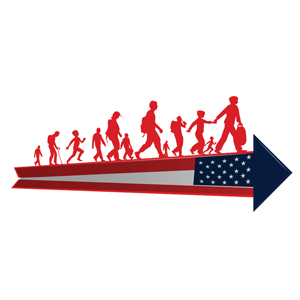 The results of the Biden plan could be more of the same, repeating Obama’s mistakes. But there’s a solution, the authors note.

History is likely to repeat itself with President Joe Biden’s immigration proposal. Yes, the plan is laudable for its twin goals of providing a path to citizenship for the roughly 11 million undocumented immigrants and reinstating visas for highly skilled workers. But as the idiom goes, this dog won’t hunt. That’s because both sides of the aisle in the U.S. Congress will find aspects of the legislation objectionable. Even if the Democrats eliminate the filibuster so they can pass legislation with their ever-so-slim control of the Senate, Democratic lawmakers themselves are unlikely to reach a consensus, as experience shows.

This is a repeat of the political battles of the Obama years, when the Republicans staunchly supported skilled immigration while the Democrats held U.S. companies and their would-be workers hostage to demands to provide citizenship to the undocumented. The Democrats have also battled each other, as when Sen. Dick Durbin held up bipartisan legislation to remove discriminatory per-country limits on visas, which led immigration-advocacy groups to call him a racist. Sadly, the results of the Biden plan will be the same: warfare between and within the parties; no immigration reform; and a further demolition of U.S. competitiveness.

There is a simple solution: Separate skilled and unskilled immigration into separate bills—and let each piece of legislation stand on its own merits. Easing opportunities for skilled immigrants to study, work, live, and build companies in the United States is the closest thing to an economic free lunch the country will ever find. There is bipartisan agreement on skilled immigration. That part of Biden’s plan would be an easy, prompt, and significant achievement for the new administration.

The Obama and Trump administrations presided over a lost decade for immigration reform. When we wrote The Immigrant Exodus in 2012, Washington was at a similar juncture as today. Facing an uncertain future over their status, highly skilled immigrants were already beginning to flee the United States. Then it got worse: Since 2013, when Congress failed to enact reform and entered a toxic period of bipartisan political conflict and immigrant-bashing (the latter mostly by Republicans), many thousands of start-up companies that could have been launched or grown in the United States were started elsewhere or have moved abroad. For the longest time, the United States had the highest concentration of “unicorns”—start-ups with a stock market capitalization of a billion dollars or more—in the world. The last decade, however, has seen them established elsewhere. Today, China is the fastest-growing region for unicorns; India now has dozens of them as well. A Shanghai-based financial research firm found that China now has more unicorns than the United States, and India expects to birth more than 50,000 start-ups by 2025, including 100 unicorns.

We used to worry that international students would promptly return home with their skills and training, but the truth is even worse. We have already demonstrated in our research that immigrants and their children go on to found many of the most successful companies, including Apple, Google, Tesla, WhatsApp, Instacart, and Slack. A 2018 study by Crunchbase found that the majority of U.S.-based unicorns were founded or headed by immigrants. Though the concentration of wealth and market power at these technology giants is associated with income disparity and even job displacement, successful tech companies do create disproportionate employment and wealth. The state of California managed to run a $15 billion government budget surplus during 2020—a pandemic year—largely through the capital gains and secondary economic effects associated with start-ups.

More difficult to tally, but at least as important, are the hundreds of thousands of immigrants in science fields who have opted to take their talents elsewhere. Along with them have gone future inventions and skills vital to U.S. competitiveness. A 2017 analysis calculated that foreign nationals comprised 81 percent of full-time graduate students in electrical engineering and 79 percent in computer science. In past decades, many such students stayed on to obtain permanent residency and start companies. We used to worry that they would promptly return home with their skills and training. But the truth is even worse: They no longer even come here to study. A November 2020 survey of 700 U.S. universities found international student enrollments to have fallen by a staggering 43 percent. China, India, many European countries, and Canada have all trained their sights on bringing in more international students in the STEM fields—science, technology, engineering, and mathematics—by offering the prize of a path to residency and even citizenship. They are also enticing their own nationals at U.S. universities to come home, which has become an increasingly easy sell given the unfriendly and uncertain environment for immigrants in the United States.

The STEM problem is exacerbated by the fact that many U.S. companies use H1-B visas to lock in STEM degree holders, many of whom then have to wait for decades for the U.S. government to approve their green cards. These visas tie the foreign workers to their jobs and allow the employer to pay them less than they could be earning—which drives down pay for American workers as well. According to recent research by Michael Roach and John Skrentny, professors at Cornell University and the University of California, the H1-B guest worker visas were the primary route that the majority of international STEM doctorate recipients took to stay and work in the United States.

Biden’s broad immigration-policy proposal would vastly improve on the status quo. His proposal would make it easier for H1-B holders to work at other companies and for their spouses to work legally in the United States. The law would extend the period for which STEM graduates can legally remain in the U.S. to find work or find companies. Their skills could go to work for the U.S. economy.

The problem with the Democrats’ all-or-nothing approach is that it leaves no room for compromise or agreement. But there are a few things Biden could do better. Any reform should remove the per-country-of-origin limits on employment-based green cards and exempt dependents from the count toward such limits. The Biden plan doesn’t include start-up visas with a path to citizenship. This is critical: Founders who either employ people in the United States or have raised funding for a start-up to that end should be able to remain and receive an expedited route to citizenship.

The problem with the all-or-nothing approach that the Democrats have repeatedly attempted is that it leaves no room for compromise or agreement on common points—which makes immigration reform a lose-lose proposition. The Republicans will likely be open to some form of legalization for undocumented residents and will surely support many parts of Biden’s proposals on skilled immigration. For example, if Biden agreed to defer discussions on providing undocumented residents with citizenship in exchange for the ability to grant them 10-year visas, it could be palatable to the majority of Republicans. A start-up visa would also be a slam-dunk. Both parties might even agree on permanent residence for unauthorized immigrants who entered the United States as minors, sometimes referred to as “Dreamers”—based on the never-passed DREAM Act. But Congress will only reach agreement if these issues are unpacked instead of lumped together, like in past failed attempts at reform, in an all-or-nothing package.

As global demand for valuable talent intensifies, skilled immigrants are already turning away. The United States will never attract such talent back unless it entices them now. Britain recently made a blanket offer of citizenship to Hong Kong citizens, an ingenious move to attract the best of a skilled and highly educated workforce. China is aggressively courting both expatriates and ethnic Chinese who are foreign nationals to immigrate and start businesses. After four years of immigrant-bashing, the United States must send a strong signal to immigrant students, researchers, and founders that they are still welcome in this corner of the world. There is no better way to roll out the welcome mat than to make it easier for immigrants keen to study, work, and found companies to come where people have always come to pursue their dreams and make their mark: the United States.

This column, reprinted with the permission of Vivek Wadhwa, first appeared in Foreign Policy. Wadhwa is a distinguished fellow at Harvard Law School’s Labor and Worklife Program. He and Alex Salkever have co-authored four books, including From Incremental to Exponential: How Large Companies Can See the Future and Rethink Innovation.