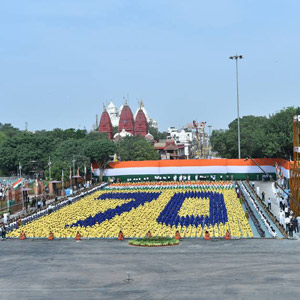 Indians, being diverse, democratically inclined, forward thinking, industrious, motivated and willing to self-correct, in most part, have garnered real strengths in various arenas of national and international significance. And yet the nation is at a tumultuous juncture, thanks to caste and religious conflicts, gender violence, resurgence of animosities towards its neighboring Pakistan, and a troubling shift towards a rapacious and self-aggrandizing nationalism.

August 15th, 2018, will mark the 71st Anniversary of India’s Independence. How do I honor this upcoming milestone? Anniversaries should not simply be gestures of celebration, but must also be grounded in commitments. This reflection is therefore not designed to appear on August 15th as a gestural salute to India’s Independence Day. It is a reflection that spills into those unmarked times and places beyond celebratory gestures. Reflections flow into unexamined corners of the mind; they open up spaces never imagined and, like water, begin a kind of cleansing for new beginnings.

I fear, in the wake of current events, of caste and religious conflicts, gender violence, and resurgence of animosities towards its neighboring Pakistan, and a troubling shift towards a rapacious and self-aggrandizing nationalism, the story of present India is scripted in discordant voices. In a democratic process, citizens should envision and articulate commitments and uphold the responsibility of leadership to implement them, and to support and advance the welfare of all citizens.

As a member of the Indian diaspora in the U.S., I believe we, in both countries, are operating under “crisis mode,” a modus operandi that is threatening democratic values and principles and inviting fascist agendas and fringe groups to gain prominence and power. I call on the youth of India and the Indian diapora to forge common ground for building social justice and human rights in both countries.

With the resurgence of Hindutva politics and increase in mob rule, Indians have experienced an assault on their citizenship and human rights, especially if their “difference” is viewed as threatening to the dominant Hindutva ideology of a “true” citizen.

According to a Human Rights Watch report, “Limits on free speech and attacks on religious minorities, often led by vigilante groups that claim to be supporters of the ruling Bharatiya Janata Party (BJP), are an increasing concern in India. In 2016, students were accused of sedition for expressing their views; people who raised concerns over challenges to civil liberties were deemed anti-Indian; Dalits and Muslims were attacked on suspicion they had killed, stolen, or sold cows for beef; and nongovernmental organizations (NGOs) came under pressure due to India’s restrictive foreign funding regulations.”

Of course, Indians, being diverse, democratically inclined, forward thinking, industrious, motivated and willing to self-correct, in most part, have still garnered real strengths in various arenas of national and international significance.

According to a report in the Financial Times (August 13, 2017), “India and Pakistan at 70: their years of independence in charts,” India is now ranked as the third largest economy in the world, ranking above Germany and Japan since the turn of this century. Although India, Pakistan, and Bangladesh are still considered “poor” countries, India’s progress since its independence in 1947 is remarkable: “At the time of independence, Indian output represented around 15 per cent that of the U.S. Now the Indian economy is around half the size of the U.S.” Further, life expectancy in India has risen from 32 in 1947 to 68 now due to “dramatic strides in healthcare, immunization, nutrition, and prevention and treatment of infectious diseases.” Mobile connectivity due to technological investments has made India second only to China in terms of the largest mobile markets globally. Moreover, “India has made impressive gains in literacy rates, which increased from 16 per cent in 1951 to 72 per cent in 2015.”

India has also made progress with regard to its 8 Millennium Development Goals adopted in 2003. A 2015 article by Rakesh Dubbudu, titled “Has India achieved the Millennium Development Goals (MDG)?,” appearing in factly.in, states, “India’s MDG framework is based on the 2003 framework and includes 8 goals, 12 of the 18 targets relevant to India and 35 indicators. The Ministry of Statistics & Program Implementation (MoSPI) released the India Country report of the MDGs in February 2015. The report provides insights into the progress made on these eight goals.” The report charts indicate India has achieved part of the goal to “Eradicate Extreme Poverty and Hunger” and to combat HIV AIDS, while it is very close to the target in decreasing incidence rates of Malaria and other diseases, achieving “Universal Primary Education,” promoting “Gender Equality and Empower Women,” and reducing “Child Mortality.” It was ranked close to target in its goal to “Ensure Environmental Sustainability.” India fell short of target in three goals: to reduce proportion of underweight children; improve maternal health; and ensure “Environmental Sustainable indicators to halve the proportion of people without access to safe drinking water and basic sanitation.”

There is much that the country has undergone and risen above in the last 70 years. The dimensions of this journey, like the confluence of the three rivers in India’s plains, are proclaimed as well as cherished! Moving from nationalism of early independence phases to carving a pathway of self-reliance and governance, in the wake of colonial after-effects, India’s historical trajectory has been exhilarating, but also tumultuous.

The specter of Indo-Pak partition still rears its ugly head, and communal violence, related to old religious divisions and new political, social, and economic struggles, still tears at the fabric of people’s unity. Recent mob rule and rising Hindutva power has wreaked violence on Muslim and Dalit communities, as well as threatened growing female power and presence in the public sphere.

The murder of journalist and activist, Gauri Lankesh, the 55-year-old Bengaluru-based editor of Lankesh Patrike, on September 5, 2017, led to public outrage and condemnation. Her murder was followed by the “March for Democracy,” one month later, organized by All India Coordinated Mobilisations For Justice For Gauri Lankesh, in which four hundred people from different parts of Karnataka participated. Protesting against fascism, governmental support of the extremist BJP leaders, and the repressive use of threats to silence free press, the marchers invoked the words of Gauri, “My voice will not be silenced.” She was an unflinching critic of right-wing Hindu extremism. She received the Anna Politkovskaya Award posthumously. This award is instituted by RAW in WAR (Reach All Women in WAR), and was awarded to Gauri Lankesh for taking up the causes of women’s rights and opposing caste-based discrimination, in the face of the violence unleashed by fascist forces emboldened by the ruling Party.

A nuanced understanding of India’s complex problems is being translated into action for change by participants and victims in the struggle, often through support from organizations that work as allies. A case in point is the young teenager, Monika, whose story was reported by Naomi Grimley in BBC News (“The Girl who Sabotaged Her Own Wedding”). Child marriages are still a threat in many parts of the world. Monika’s case in rural Rajasthan, India, reflects the threats to a girl’s health (physical, psychological, and emotional), education, livelihood, and control of her own life. It also reveals how child marriage perpetuates gender inequality, domestic violence, and escalates economic burdens and social stigma against girls, as poorer rural families tend to have more children and practice sexual selection, femicide, and unlawful marriages of underaged girls.

Reversals of major social and human rights advancements in addressing caste chauvinism and colonial laws criminalizing LGBTQ identified people, while recognizing “third gender,” have confounded progressives in India and around the world. Some of the horrifying consequences of apathy towards and disregard of Dalit suffering are reflected in the silence and inaction as well as active attacks on many groups placed on varying levels of marginalized social hierarchies. Indians, for example, ignored the need for condemning (nationally) attacks on Dalit women raped at alarming rates. Nor do they curb their disparaging comments about dark skinned people, including Indians themselves, but recently through attacks on Africans studying and living in India. (India’s tortuous history shows links between caste and racist attacks).

Marginalized groups in India are under attack, both socially and structurally. Services and facilities for the care and integration of people with disabilities are sorely absent or inadequate. As Human Rights Watch report points out, “Women and girls with psychosocial or intellectual disabilities in India continue to be locked up in overcrowded and unsanitary state mental hospitals and residential institutions, without their consent, due to stigma and the absence of adequate community-based support and mental health services.” (“India: Events of 2016.” Human Rights Watch Report. 2016, Aug 13)

In addition, dangers to border security and national stability are evoked to legitimize military and police aggression and brutality within India. According to Human Rights Watch, “A crackdown on violent protests in Jammu and Kashmir beginning in July killed over 90 people and injured hundreds, fueling further discontent against government forces. Impunity for police and security forces largely continued amid new allegations of torture and extrajudicial killings, including reports of sexual assault and other abuses by security forces in the central Indian state of Chhattisgarh.”

From my perspective, as a member of the Indian diaspora in the U.S., recent escalation of anti-immigrant and anti-People of Color attacks and white supremacist rallies in the U.S. have woken many Indians to vocalize and condemn hate crimes targeting not only the so-called “Model Minority” among them, but large swathes of immigrants and refugees of color. Sometimes the despair of vulnerability drives people inwards, but many “successful professional” Indians are realizing what it means to be targeted (as early immigrants did and as blacks, Hispanics, and working class Indians have always known), and I hope this realization leads to building solidarity with communities of color across differences.

My optimistic projection is that Indians, in India and the diaspora, will not be counting their achievements just in competitive terms, but will develop an attentive and nuanced valuation of their country’s material, intellectual, and technical wealth, its human assets, and its cultural and spiritual riches. The youth in India and the diaspora is a new breed, no longer willing to grab at the undertow of capitalist neoliberal expansions or passively accept internal corruption and politicians’ fake bravado and slogans. I hope the emerging youth voices and writings will reflect deep convictions and humane engagements, and will “remake India” as a force for human rights and social justice.

Dr. Pushpa Parekh is a professor of English and the Director of African Diaspora and the World at Spelman College in Atlanta. She teaches, among other courses, “Contemporary India: Literature and the Political.”