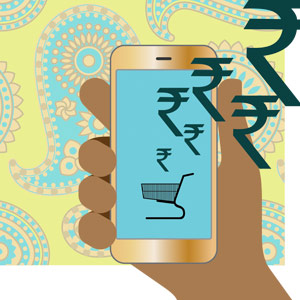 India’s massive experiment with demonetization—designed to curb black money—has had its fair share of critics. Here’s a sanguine look at some of the benefits that are emerging, including the high likelihood of an unfathomable prospect: that India, despite its large chunk of illiterate population, could go significantly cashless sooner than most other countries.

Disruptive, it was. But also revolutionary—arguably the largest event of its kind in India’s monetary history. Demonetization, the Modi government’s sudden withdrawal in November 2016 of Rs. 500 and Rs. 1,000 notes was of course stunning in scale, scope, and intent. After all, the banned notes amounted to a whopping 86 percent of total currency notes in circulation.

Much has been written about the poor execution of this bold step in India’s perpetual hunt for black money and corruption: long lines at the banks, the abysmal helplessness of the poor who were especially dependent on the lifeline of cash, the constantly changing rules in what appeared as “learn as you go” implementation.

There certainly was turmoil! From rural to urban areas, and from farming to filming, vast sectors felt the pain of suddenly finding a good chunk of their cash notes to be useless pieces of paper. Farmers reportedly did not have cash to buy seeds, fertilizers, and other crucial supplies. Movie studios were unable to pay junior artists their wages in cash as is the custom. Contractors had to devise impromptu credit schemes on behalf of their day laborers so that they could get food and other bare necessities. A high percentage of India’s economic engine is cashbased. Many such cash-based businesses came to a standstill, causing unemployment.

Terrible as that phase was, things did soon change. I spent the whole of December in India and was totally unprepared for the welcome normalcy of business transactions, big or small. I bought fruits, vegetables, and groceries without trouble. I travelled to small towns and villages and shopped at restaurants and gas stations. There were short queues at a few banks. But commerce continued just fine, even if with some twists. Everyone either had enough change, or had adapted to digital payment options, which were rapidly becoming acceptable tender in all strata of commerce, right down to street vendors. One could pay digitally not just for a taxi ride with contemporary companies like Uber, Ola, and Meru, but even for auto rickshaw and bus fares. Chaiwalas and street vendors were busy as ever. Many, if not all, were accepting instant digital payment options from one of the several exchanges that have mushroomed in India: Chilar, Paytms, Jiomoney, SBI’s Cash Buddy, Yes Pay, UPI, and Aadhaar-based apps on smartphones. With such person-to-person payment apps on the phone you just dial a 1-800 number, enter your bank account information and that of the payee, along with your PIN number, and your transaction is complete. Meanwhile, the many malls in cities like Bangalore and Mumbai, where credit cards are the most prevalent form of payment, were bustling with customers.

Economists including Amartya Sen, Kaushik Basu, Paul Krugman, and others have criticized demonetization as anti-people, and others have blamed Modi for poor planning and execution. The time it took to print new currency, and to recalibrate ATMs to dispense the new currency, could have been shorter. Some political leaders even instigated defiance of this massive move, whereas cooperation in these matters would have spawned better results. Making matters worse, there are always black sheep willing to abuse the system. While most bank employees everywhere worked extra shifts to facilitate note conversion and supply of new currency, there were also incidents of rogue bankers helping black marketeers convert and decontaminate their old currency through the backdoor, defeating the very purpose of Notebandi.

But, surprise of surprises, what most observers were not ready for, was the ease with which the Aam Admi (the common man) everywhere came to accept demonetization as a necessary disruption in order to: (1) Curb black money so that the massive disparity between the rich and poor could be alleviated, if not eliminated. (2) Curb terrorist activity. (3) Curb the illicit financing that is flooding border states like Punjab and Rajasthan with addictive meth and heroin. (4) Prevent financing of other antisocial rackets. (5) Increase tax compliance and bring more revenue to the Indian government.

Harvard economist Kenneth Rogoff in his recent book The Curse of Cash (2016) makes a compelling argument to get off the paper money regime, an idea of particular relevance to India. Abundant black money in the underground economy has been promoting tax evasion, illicit election funding, drug and human trafficking, corruption, terrorism, antinational pursuits, and what not. Notebandi will not eliminate all of these ills, but at least India will start addressing those issues more seriously.

The premise for Modi’s notebandi is that some of the evils in Indian society such as corruption in every walk of life can be tackled instead of tolerated endlessly as a way of life. It may not be eliminated entirely perhaps, but its debilitating evil influence on the daily life of the masses can be limited. And indeed, the unprecedented step of notebandi has put a modicum of fear in operators of black money. Now, the rich with unaccounted property are in dread of new laws that would begin assessing these assets, if not seizing them. There are even unconfirmed reports of a year-long embargo on certain real estate sales till 2018 so that ownership of such assets could be verified. The Special Investigation Team on black money recommended capping cash transactions at Rs.3 lakhs and cash holdings at Rs.15 lakhs. The Modi Government has accepted the former, but not the cash holdings cap.

What people miss in their criticism of Modi’s notebandi is that there was no personal or political gain in it for him. On the contrary, he would have had to know that the move would create short term instability and chaos, and as such would be roundly criticized by opposition parties. It is difficult to understand Modi’s economic evangelism to promote India and its progress if you disregard his deep-rooted conviction in his faith. It’s not only plausible, but likely that his motives for such a bold initiative were laudable. There are those who have observed that his actions were in line with Krishna’s injunction to Arjuna to do his dharmic karma without regard to the results—praise or censure.

And the results are starting to speak for themselves. Most Indians are convinced that with someone like Modi at the helm it is possible to take tough initiatives to curb black money. Top European Commission officials think that demonetization would strengthen the economy. Professor Jagdish Bhagawati has hailed notebandi as a courageous move with substantial economic benefits down the road. Nobel Laureate Kailash Satyarthi was quick to point out that there was a sharp drop in human sex trafficking. Stone-pelting in Kashmir on law-enforcing forces came to an abrupt end.

The grim forecasts of a sharp drop in the rate of growth of India’s Gross Domestic Product on account of cash shortage brought on by demonetization have been proven false. T. C. A. Anant, Chief Statistician, Central Statistical Office, Kolkata has announced that growth during fiscal 2016-17 would be a healthy 7.1 percent which is far above what was expected. Rather, growth prospects have considerably improved with
(1) One of the most growth-stimulating budgets for 2017-18,
(2) The ushering in of the nationwide Goods and Services Tax (GST),
(3) ​Sizable increase in foreign direct investment, and
(4) A very confident Reserve Bank of India has left the interest rate stable at 6.25 percent instead of hiking it as expected—because there was no outbreak of inflation in the economy despite recent back-to-back droughts.

One of the most surprising upsides of Notebandi has been the speed with which digital payments are gaining acceptance in the masses. Given that, this move practically forces financial inclusion. Thanks to the push towards digital finance, even those poor who have been traditional outcasts in the realm of personal banking—roughly 12 percent of the population—are enabled to participate in the formal economy and learn pecuniary smarts. The trend, along with the Aadhaar ID cards, which now number more than 1.1 billion for India’s 1.3 billion population, represents a dramatic change in how India does business in the consumer sector.

To be sure, there are certainly enough hurdles, especially in India, that could make going significantly cashless fanciful, if not unattainable. The system requires a certain amount of sophistication and faith that may be hard to come by in the lowest strata of economic class; not to mention logistical challenges of shifting such a huge mass of population into a digital economy. Not all street vendors will invest in point-of-sale hardware. And then there are issues of cybersecurity where even one bad incident can spook millions of those living hand-to-mouth. Critics who doubt the prospects of a cashless economy in India abound, and perhaps with good merit.

But as of now, the results are palpable. Even street vendors and auto drivers are switching over to digital wallets with payments going directly to their bank accounts. Since Notebandi was initiated, Paytm alone, the largest digital payments company, signed up some 20 million customers in about a month, bringing its total number of customers to a sizeable 177 million. At this rate India will go significantly cashless sooner than most other countries and could be the first third world economy to successfully undergo the digital revolution. This is no small achievement for an emerging economy with a sizeable illiterate and a much larger apathetic population.

Dr. Sudhanva Char is adjunct professor of Biostatistics at Life University in Marietta, Georgia. He also specializes in Behavioral and Business Economics.