COVID-19  In-depth info for Indians in Atlanta/Georgia. Click here
Home > Magazine > Features > Perspective: “We Will Never Give up Kashmir!”

Perspective: “We Will Never Give up Kashmir!” 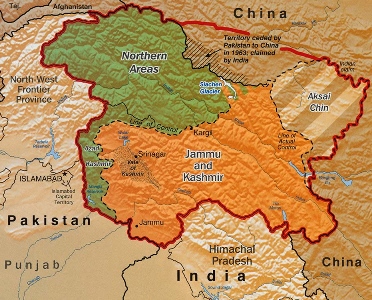 A thoughtful takedown of this and other absolute postulations that routinely do the rounds in the public discourse of the noisy Indian democracy. More often than not, these hardline postulations come from those who have no inkling of ground realities to make any comments, let alone loaded ones.

Once one is out of school in India, it is strange how several beliefs go on to be shattered as one learns more. A moment of revelation for me as an Indian youth was seeing the beautiful (but undercelebrated) film Yahaan 11 years ago. Several of my preconceptions about Kashmir, its people, and its state of affairs were decimated in one clean stroke of courageous, honest cinema.

The film essentially taught me that for someone like me who has never faced even a fraction of what Kashmiris go through each day, it is not exactly sensible to have strong opinions on what their future should be. I realized how the frequent nationalistic proclamation of “We will never give up Kashmir” is as senseless as someone from Assam giving a verdict on, say, the Kaveri river water dispute. When it comes to highly sensitive geopolitical issues, we as citizens should tame extreme opinions, because there are always some important aspects which get ignored in the heat and noise of hyper nationalism and patriotism.

One of the most amusing things about the masses is how proficient they are at stating opinions as facts. The Internet and social media are replete with proclamations on several facets of the subcontinent’s history in one-dimensional, biased ways. There is no dearth of websites and YouTube videos spewing highly inflammatory discourses, zealously maintained by Muslim and Hindu fundamentalists. Often the young Indian’s postschool (and these days even during-school) contact with history, especially Partition and post-Independence events, happens via these incorrect, propagandist takes. On top of it, not many among us read history from multiple authentic sources. Unsurprisingly, a large majority of India’s young “digital” millions have scant knowledge about its past. And yet, that rarely prevents them from being aggressively opinionated.

Konkan, on the western coast of Maharashtra, is one of the most beautiful places in India (so is Kashmir, I hear). Born and brought up in a town there, most of my childhood memories revolve around natural beauty, the rain and the greenery, the fun at school, the peace, the nice people, and the brushes with innocent teenage love. Today, I realize how lucky I was to be born there.

When I try to imagine what an average young person born in Kashmir in the 1980s will recollect about their own childhood, what come to my mind are frequent curfews, jingoistic people, the beginnings of hate and revolt, human cruelty, violence, and bloodshed. Yet we so thoughtlessly form opinions on the Kashmiri people who have been through some of the most terrible situations in recent times. Why have we lately become so eager to repeat the mistakes Europe committed in the 1930s and 40s in the name of nationalism?

Kashmir is so complex an issue that there is no plain black and white there. It will be a high point of maturity for us, the rest of Indians, when we finally accept that. Besides, despite the fact that the Kashmir issue is predominantly of geographic and political origin, it has turned (or was converted) into a Hindu-Muslim conflict. We must not fall prey to this maleficent fallout of the crisis. There are several antigovernment movements in other states actually heralded by non-Muslims: the ULFA and Maoists, for example, have been no less violent than the militants in Kashmir.

History is not just a chronicle of the past, but also a crucible of precious lessons. Still, hardly any one of us attempts to understand our country’s history with an open, unbiased mind. We love waxing eloquent about events like the Partition, and maligning the likes of Gandhi and Nehru, but much of it is done on the basis of half-baked, selective information collected from hate-filled websites and WhatsApp forwards. It is astonishing how even the most educated among us quickly turn irrational and narrow-minded when it comes to such a sensitive topic as Kashmir. As with most problems plaguing India, the Mahatma can be invoked here, too. Be the change you wish to see in the world, he urged. If we wish to change the Kashmir situation, we first need to change ourselves as citizens of India (with the same positive change happening in Pakistan, too).

We can commence by addressing our ignorance (or perhaps by first accepting we are ignorant) about the Kashmir issue. Both Hindus and Muslims need to get rid of the propagandist notions that we have been fed by our respective “fun-folks” (fundamentalists, that is).

Expert historians like Ramachandra Guha (India After Gandhi), and credible government officers like A. S. Dulat (Kashmir: The Vajpayee Years) can help us begin doing that. Besides, there are two recent books, one by a Kashmiri Hindu (Rahul Pandita’s Our Moon Has Blood Clots) and one by a Kashmiri Muslim (Basharat Peer’s Curfewed Night), giving us a different perspective each. Four good books already! But that still won’t suffice in providing complete knowledge of this intractable issue. Once we get more knowledgeable about our past and understand the complexities of historical events through such active efforts, we start turning into more responsible citizens instead of click-happy social media maniacs.

But our responsibility doesn’t end there. Perhaps the most important reason for never having reached a peaceful political solution for Kashmir is that the leaders of India and Pakistan are scared of infuriating the public in their respective countries. This, I believe, is the most farcical form of injustice that the Kashmiri people have had to endure. Their fate depends more on what a far-flung Maharashtrian or Keralite thinks about Kashmir rather than what they themselves think. It is terribly amusing (and tragic) that a nondescript Gujarati, who may never even have chastised his local corporator for his ward’s dilapidated municipal hospital, will be more than willing to encourage violence “for Kashmir.” We need to grow up and understand that there is a lot more at stake for the terrorized and alienated people of Kashmir (both Hindus and Muslims) than there is for us, the non-Kashmiri Indians. This is geopolitics, not some social sector issue like corruption or women’s safety that each Indian citizen should scream and try to influence decisions.

Our paramount duty is to give our government and the people of Kashmir a pressure-free environment to decide on the matter. Huge mistakes have been committed by all involved parties in the past, but we can’t afford endlessly revisiting the same mistakes. What the Kashmir crisis most importantly needs is strong political will from all sides, and we as citizens of India must take the responsibility of creating a conducive, favorable atmosphere for it.

Disclaimer: The Kashmir issue, just like many others plaguing India, is way too intricate and complex to be discussed in a few hundred words. This article only deals with a few of its aspects.

Kiran Kumbhar is a medical doctor from India and a PhD student at Harvard University, Boston. His articles frequently focus on public health, history, cinema, and the intersections between the three. His writings can be found at kirankumbhar.com.