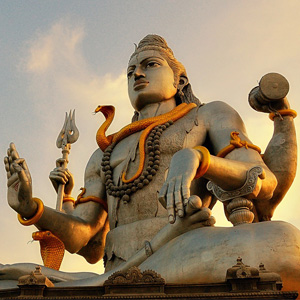 A journey to Srisailam, the abode of the second Jyotirlinga in the dense Nallamala Forest of southeastern India.

Mythology says that Shiva—the fascinating, wild, and mysterious yogi—exudes radiance and cosmic power in 12 prominent temples. Worshipped in the linga form (an oblong shape), Shiva resides here as the Jyotirlinga—the effulgent linga. According to the lore, these idols are self-manifested ones (swayambhu vigraha).

As belief goes, the energy of Shiva’s cosmic power embedded in these temples can be felt by those who approach him with faith. Unaware of this, I get a whiff of an unknown magnetism in the temple of Somnath, in Gujarat. The brief visit leaves me wondering, and it is only later that I learn the significance of the temple and the above details. From then, I secretly nursed a desire to visit all the 12 shrines.

Spread across the length and breadth of India, from the Himalayas to Rameswaram, the first Jyotirlinga dwells in the seaside temple of Somnath.

The opportunity to visit the second shrine—in Srisailam—arose soon. Situated in the dense Nallamala forests of Andhra Pradesh, on top of a hill called Sirigiri, resides this powerful icon. The temple has historical, mythological, and spiritual importance, and here Shiva is worshipped as Mallikarjuna along with his consort Bramarambika.

Taking advantage of a long weekend and excellent road conditions, we opted to drive the 530 km (330 miles) distance from Bengaluru. It was just after the monsoons; the vista presented panoramic views of lush fields, ponds, and greenery. Choosing to stop overnight before we hit the arduous hilly forest stretch, we reached the modest town of Nandyal by noon. 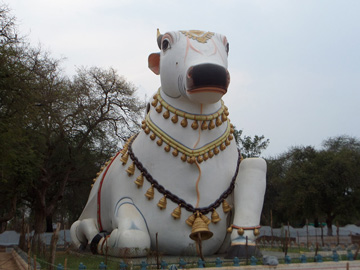 (Left) The gigantic bull at Mahanandi.

Wonders of Mahanandi
Shiva’s abode is incomplete without the stoic presence of his faithful bull, Nandi. Scattered in a radius of 20 km around Nandyal town are nine shrines dedicated to Nandi. The shivalingas here date back to 1500 years. The evening saw us exploring these Nandi temples, of which Mahanandi is the largest. 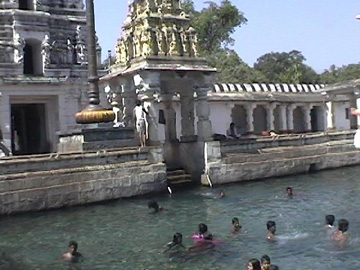 (Left) The pushkarni in the Mahanandi temple.

The towering gopuram (gatehouse tower), with its architecture belonging to the Chalukya era, cast a welcoming sight amidst the verdant forest backdrop. The temple structure has a unique style: the pools called pushkarni (stepped tanks) within the temple complex are enclosed by an outdoor hall or a mandapa.

A 60-square-foot central pool situated in the inner chamber of the temple is fed by a natural spring that originates from under the altar. There are further astonishing facts to gather: the water with healing properties supplies a continuous flow irrespective of the season. Also, it is tepid throughout, despite changing climatic conditions. The priest points to the source and sprinkles some of the pristine liquid on us.

The inlet-outlet design of the pushkarni is such that a constant level of five feet is maintained in the pool, enabling devotees to take a dip in these holy waters. This unique architectural expertise belonged to the skilled artisan community called Vishwakarma who received royal patronage during the Chalukya rule. 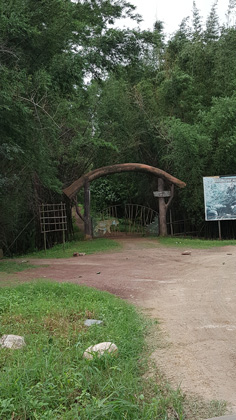 The following morning, heading towards our destination, we drive through the forest of Nallamala. It has a rich biodiversity of timber, medicinal plants, a large tiger reserve, and is home to leopards, sloth bears, and various birds as well. The mighty river Krishna cuts through the forest. While most of the animals remain elusive, some monkeys and a lone peacock greet us on the way.

The roll-call
Just two miles from Srisailam, we make a mandatory stop at the quaint Sakshi Ganapathi temple. Protocol says that before seeking Shiva’s blessings, a roll call with Ganesha, his son, is a must—else, the efforts may end in a cipher. Here, the black monolith elephant-god assumes a posture holding a book and a writing instrument, keeping track of the devotees who visit his father’s shrine! We promptly registe our names and lineage (gotra) with him. 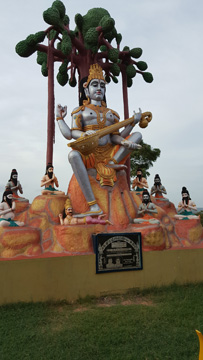 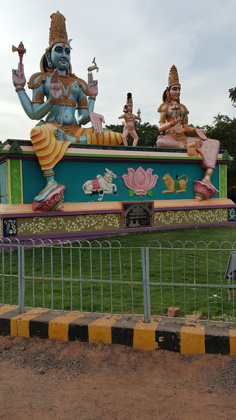 (Left) Statue of Shiva at the entrance gate of Srisailam. (Photo: Susheela Srinivas)

A final short drive up the hill and we enter through the security gates of Srisailam. Statues of Shiva-Parvati and Nandi welcome us, while a loudspeaker plays renditions and slokas. We head towards the cottages. The simple accommodations offered by the state tourism department do not bother me as I look forward to the darshan. 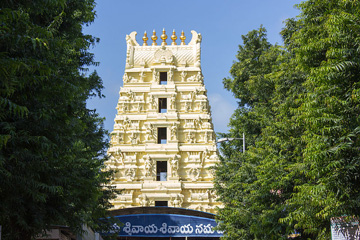 A fortress-like wall encloses the small town of Srisailam, whose activities are exclusively dedicated to the temple. The centuries-old gopuram, stone pillared corridors with carvings, and statues depicting the various stories of Shiva give a massive appearance to the temple.

Sparsha Darshan
Thankfully the crowds are thin, and we proceed quickly in the line. A volunteer requests us to deposit our gadgets and cameras at a counter.

“Offer your obeisance to the lord. His divine touch will fill your heart with rich memories,” he declares gently, rousing my curiosity. It was not without truth, I would realize a little later.

Collecting the pot of water for the abhishekam, we continue towards the inner chambers, to the resonating chants of ‘Om Namah Shivaya.’ At the doorway of the sanctum, I hand the pot to the priest. His gesture astonishes me: “Sit down and perform the abhishekam. Here you have the privilege of sparsha darshanam—you can touch the lord!” It is a rare opportunity, indeed.

Overwhelmed, I bend gingerly, running my hands around the linga, feeling the deity. It is warm to the touch, despite the continuous flow of water over it. The warmth emanating from it makes my hair stand on its end. I bow down in surrender, lost in the moment, experiencing an inexpressible joy. Inadvertently, my eyes turn misty as I am filled with an unknown energy and a deep sense of contentment.

For a while, everything around me stands obscured; the spiritual power is palpable around every nook and corner of the premises. I walk in a trance towards the Bramarambika temple and the other smaller shrines within the complex.

​With the rest of the evening at our disposal, we decide to glimpse the river Krishna—here called the Patalganga—meandering in the valley below. A cable car takes us down, and from there a short boat ride brings us to the dam. The picturesque surroundings add to the peace and quietude of the place. Later we visit the tribal museum which displays artifacts used by the indigenous tribes of the forest region.

True to that gentleman’s words, my visit to this ancient temple of prominence is one of awe and thrill, leaving a profound impact on me for a long time to come. I often recall the surreal experience and ecstasy I experienced in the sanctum-sanctorum. The impression, vivid in my memory, has further strengthened my desire to visit the other shrines. Will my wish be fulfilled? Time alone will reveal what is in store. Susheela Srinivas is a freelance writer and columnist based in Bengaluru, India.