Places: A View from the Balcony 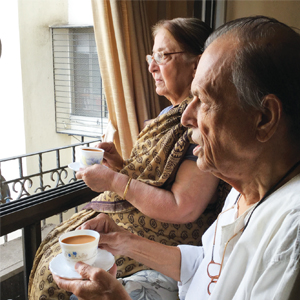 Slices-of-life from the maximum city of Mumbai shed light on the dance of survival.

(Left) The author and his wife during their morning routine of chai and relaxation in the balcony.

The only stipulation my wife made when we decided to move into a high-rise building in Mumbai upon my retirement was that the flat should have a balcony. Having lived all our married life in bungalows in remote areas where I worked in the oil industry, we had gotten used to the ritual of the morning cup of tea on the porch facing the garden. This time, place, environment, and mood had a sanctity all its own. It represented relaxed and shared moments before the duties of the day sucked us into work. The porch and the garden were symbolic of peace, closeness, and shared moments. No wonder my wife was so keen to have at least a balcony where we could take in the morning air and share the first cup of tea of the day together.

Getting a flat with a balcony was not easy, since, in crowded Indian cities, every inch of covered area added to the value of the flat. Builders had discovered this long ago and a balcony was, therefore, considered to be a ‘waste’ of space. However, we managed to find a flat of our choice after some time. The flat was spacious by city standards, but our tower had rows of low-cost housing on two sides provided by the government for rehabilitation of the slum dwellers. We moved in happily, determined to make the best of the situation.

It took a few months to settle in and, in due course, the earlier “tea on the porch” was replaced by “tea on the balcony.” What was missing, of course, was the garden. Instead, we could see some treetops in the distance. They provided a touch of greenery against the drab concrete jungle all around. The treetops were the favorite meeting ground for the crows of the neighborhood. Their symphony of cries, and the kaleidoscopic patterns they made in their excitement against the green leaves was a permanent feature of the morning scene.

Soon a pattern of action emerged. We leafed through the morning papers, savored the first cup of tea, indulged in small talk, and made plans for the day. With no “office” to go to anymore, the tea sessions were leisurely and spread to over an hour. By then the city would get into gear and the mood of the surroundings would change.

Quite early in my stay I had espied a blind man being led daily by a woman to the Municipal Trash Skip on the lane in front of our building. He would lean over the side and begin salvaging recyclable material from the bin and putting it in the bag he carried. It could be paper, cardboard, tins, bottle tops, bottles, anything like that. With the bag full he would sit down next to the skip and wait patiently to be led back home.

I was intrigued by his efforts and by judicious questioning here and there came to know that the woman was his wife, and selling this trash was his only source of income. His wife did odd jobs and between them they managed to survive. The stoic acceptance by the man of his condition had surprised me, and his efforts to earn rather than beg had commanded my respect. 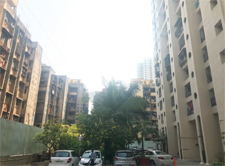 (Left) The author’s new apartment building (right), just across from the dilapidated government subsidized apartments for the rehabilitation of slum dwellers.

My interaction with him had been sporadic, and no words were exchanged in them except for the first time. I had pressed something into his hand with the words. “Baba, I have sold some cardboard. You keep this.” He had turned to face me and given my hand a gentle squeeze. No words were needed beyond that. Now he recognizes me at my “Baba” with no words being needed after that.

The building facing the balcony is not complete. Construction has been halted midway due to some legal wrangle. The structure has gaping holes for the door and windows. It has no water or electricity. Despite the delicate tentative condition of the building, an enterprising Dada of the area has rented it out to families. He collects the hafta and protects the families from eviction. On the side he also ensures enough supply of electricity by illegal connections from neighboring buildings. A rationed water supply is in place through tankers which turn up every morning. The one major hardship is to lug the water, bucket by bucket, to the flats above. This is taken care of by the unemployed youth of the area for a charge. The charge for this service has to be settled on a daily basis and is generally the housewife’s responsibility. The full system has all the efficiencies of a modern corporate house and life goes on uninterrupted by problems, although everything is illegal.

Across our balcony, the family in the flat facing us begins to stir. Their motions are predictable. The housewife rushes downstairs to ensure the water stock for the day, while her husband runs around in a lungi and vest getting ready to go to work. The wife is soon back and starts hovering around the two daughters—twins incidentally— getting them ready for school. They get transformed from plain nondescript kids to prim, uniform clad, hair-plaited students in white shirts and navy blue skirts with matching blue ribbons. The satchels are slung over their shoulders with practiced ease and they are off to school. Their mother would turn to other chores like putting the washing out to dry or crouch over the kerosene stove for meal preparation.

(Right) The incomplete construction of a building (far left), held up due to legal wrangle, becomes an opportunity for the enterprising local mob lord.

One evening, quite by chance I walked into a STD calling booth in the area and found her—the mother from the flat facing us—to be manning it. I had been curious to know more about the family, and a few casual questions filled in the gaps. Her husband was a welder, the girl were twins studying in class eight, and the lady herself worked at the STD booth for six hours a day in the evenings. They had evolved a scheme for survival. Income came from her husband’s job, or whatever she earned. The girls were responsible for cooking the evening meals, washing the clothes, and attending to their own studies. When I complimented her on the setup for survival she said, “Kya karega, Saheb? Sub mil ker chalana parta hai.” (“What to do, Saheb? We have to all pitch in to survive.”)

The balcony had introduced me to three different currents of life in our area. The retired life of an executive couple, the struggle for survival of a poor sightless man and his wife, and the life of those just above the poverty line straining to improve their lot and trying to ensure that their children see better days.

In the distance, on the green treetops, the crows continued with their symphony reminding me that in this concrete jungle there were all sorts of living things who had reconciled to the conditions around them and learnt to survive.

Y. Yunus is a drilling engineer who spent 40 years in the oil industry in India and the Middle East. Since retiring he has pursued his passion for writing.