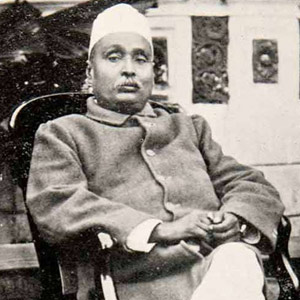 The freedom fighter, known as “The lion of Punjab,” muses poetically on the Falls and on nature, during one of his two trips to the U.S.

An iconic figure of Indian nationalism, Lala Lajpat Rai visited the U.S. twice. During the First World War, he spent four years in exile in the U.S., where he formed the India Home Rule League of America in New York City. In those years, Rai continued working towards the cause of Indian “Home Rule,” publishing a monthly journal Young India and making contact with several people active in the American progressive and liberal circles, including W. E. B. Du Bois, Booker T. Washington, Margaret Sanger, and Walter Lippman.

After Rai’s return to India in 1919, he continued working towards Indian independence. In 1928, during a nonviolent demonstration against the Simon Commission, Rai sustained several injuries after being assaulted by the colonial police. His death, at the age of sixty-three, became a rallying cry against the violence of the colonial regime. Historians have characterized Rai’s as a mixed legacy: on one hand, he was a tireless advocate for Indian independence who sought alliances around the world, but on the other, his politics were shaped by Hindu nationalist and “moderate communalist” tendencies. What remains certain is Rai’s role in the Indian nationalist movement was an important one, even after his death.

Rai’s first visit to the United States came in 1905, when he was forty years old. His tour covered New York, Buffalo, Chicago, Philadelphia, and Boston, where he lectured as much on Hinduism as he did on the nationalist movement.

In his observations of the country, published in the weekly newspaper The Panjabee, Rai emphasized the difference between Americans and Europeans, even as it pertained to custom. In England, Rai writes, “hospitality like this is an exception while in America it is the rule.” He spoke with reverence for the American education system, visiting schools and universities along the way.  Rai did not fully ignore the problems in American society—he noted, for instance, that “whites have a great prejudice against what are here known as the coloured people”—but also wrote with optimism about the non-European heterogeneity of the U.S. “[T]here are Filipinos, Cubans, Indians (both Red and East), Arabs, Syrians, Chinese, Japanese,” he wrote, and “[a]lmost every nationality in fairly good strength publishes its own organs.”

His writings also included detailed descriptions of his travels, including several iconic tourist sites such as the U.S. Capitol, the Liberty Bell, and Niagara Falls. In the passage below, Rai writes about its “awe-inspiring” grandeur.

The scenery here is magnificent, grand, and awe-inspiring. Here you see Nature in its naked majesty and are at once struck with its grandeur and beauty.

But here, again, at the same time you are forcibly reminded of the equally great powers of man. Here is this tiny animal—man—possessed of a small body, which compared with some other animals is very contemptible in its size and dimensions, who holds a very uncertain and precarious tenure of life, liable to be cut down and shortened by the bite of even some of the smallest of the reptiles, controlling everything on the globe from the mightiest and grandest of nature’s material works to the lowest and highest of its animal kingdom. Here one sees the subtle mind of man controlling this great and wonderful phenomenon of Nature and commanding its services for his or her own use; because as you know they are generating vast volumes of electrical power out of these Falls.

Then these Falls, i.e. just underneath below the Falls, they have excavated and built subterranean passages where people go and see the back of the Falls. These places are reached by elevators (or lifts as they are called in England) in place of stairs. The Canadian Government as well as the contractors of the American Government are supposed to be making a large amount of money by these Falls in various ways. Below the Falls the river forms itself into whirlpools where in some places a few feet higher or lower the water is believed to be 250 feet deep. One Captain Webb, an Englishman, once tried to swim one of these whirlpools and plunged himself into the water from a height of over 150 feet but lost his life in the attempt.

The place is now a flourishing town of fairly good size where a brisk trade is carried on in the views of the Niagara Falls and Indian (Red) curiosities, because this is the place which was formerly occupied by hosts of Red Indians whom the white population has now driven into mountain fastnesses, etc. The neighbourhood is full of Indian Associations and the fact that a great many Indian curiosities are sold here makes me suppose that probably there are some villages occupied by Indians within easy reach of the place. We passed a great day here and enjoyed it very much.

Manan Desai is an Assistant Professor of American Culture at the University of Michigan. A version of this article first appeared in Tides, the online magazine of the South Asian American Digital Archive (www.saada.org).