Recipes: A Salute To Egypt! 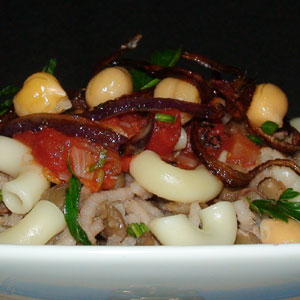 Egyptians have become an inspiration to the entire world with their extraordinary stride towards freedom from a tyrannical regime. One of the world’s oldest civilizations, Egypt is also home to a sophisticated culture, with a deep rooted love of food. This is a salute to the rise of the New Egypt, through a celebration of their rich cuisine.

The culinary history of Egypt dates back to 3,000 years and it is well documented in the form of hieroglyphics, paintings, and murals in tombs.
Due to the practice of mummification, we have been fortunate to learn what people in Egypt ate in pre-dynastic and post-dynastic times. Mummies were preserved along with all their favorite food, which was stored in huge clay jars. Some jars were filled with dried fish, dried figs, and more. Workers who built the Pyramids were paid in bread, beer, and onions.
Bread and beer were the staples of an Egyptian diet. A cloudy nutritious beer with spices was the national drink until the Muslim invasion, when the beer was banned. Aish or bread means life in Arabic, and is still a strong staple. Bread was made from emmer wheat. Pocket bread known as pita was stuffed with beans and meat and eaten like sandwiches. There were more than 30 different shapes of bread. Sweetened dough was shaped like animals and birds for use as offerings to god. After the invasions by the Arabs, Egyptian cuisine was influenced by the Turks, Greeks, Romans, and Arabs making it one of the most diverse cuisines in the world.

An Egyptian meal is a vegetarian’s delight. It is full of fresh vegetables, fruits, lentils, bread, rice, and cheese. This makes it possible for an Egyptian of any class to eat a fairly wholesome meal. Due to the harsh summers and lack of grazing field for cattle, people depend on lentils and vegetables for their source of protein. Fish and meat are
a luxury and are usually salted and dried for preservation.

Egyptians love the bold flavors of onions and garlic in their dishes along with fava beans, eggplant, okra, leeks and tomatoes. Honey is the natural sweetener. Dates and fruit juices are also used as sweeteners. Fruits like figs, grapes, pomegranates and dates are in abundance. Dill, fenugreek, coriander, cumin, sesame and fennel are the common spices in dishes. Egyptians also cultivate almonds, pine nuts, pistachios and walnuts.

Egyptians believe in the healing qualities of food. During the pharaoh era boiled cabbage was eaten before heavy drinking and is believed to have prevented people from getting drunk.
Now the beverage of choice is tea and the strong and sweet Turkish coffee. The desserts are soaked in honey syrup and topped with nuts.

Khoshari, a close cousin to our Indian Kitchadi, is one of the national dishes of Egypt. This is a famous street food and a wholesome meal by itself. It consists of cooked rice, lentils, and macaroni topped with a spicy tomato sauce, fried onions, and garbanzo beans. Ful medames another national dish, is a breakfast dip made by mashing cooked fava beans and seasoning it with cumin, garlic, salt pepper, scallions, parsley, cilantro and lemon juice served with warm pita bread and a cooked egg. Taameya is a falafel (another relative to our Indian vadas) made with fava beans, green onions, parsley, cilantro, cumin and garlic and fried.

Here are some easy recipes for you to try out and relish the tastes of Egypt.

Cook the rice and lentils in a rice cooker with 2 ½ cups of water and salt. Heat water in a saucepan, add salt and few drops of olive oil, Once the water boils add the macaroni, mix and cook until al dente.
Heat oil in a small saucepan, add the garlic and fry. Now add the tomato sauce, cumin, salt, and red pepper and let it cook for a few minutes. Add fresh parsley and set aside.
Serve in layers, first rice and lentils, then macaroni, the sauce, garbanzo beans, and then the fried onions.

This is the traditional Baba Ghanoush we get in Middle Eastern restaurants.

Fire-roast the eggplant by placing it directly over the gas flame on the stove.
Turn and make sure the skin is charred evenly all around. Place it in a bowl and cover with saran wrap. Place all the other ingredients except extra virgin olive oil
in a blender. Remove all the charred skin of the eggplant with a paper napkin.
Remove the hard tip and place the pulp in the blender and pulse the blender once.
While pulsing add the 2 Tbsps of olive oil. The mixture has to be chunky and not a paste. Season with salt and pepper. Transfer the baba ghanoush to a serving bowl. Drizzle with some olive oil on top. Sprinkle some freshly chopped parsley and paprika. Serve with some warm pita bread wedges.

Interestingly this is like the Indian rava kesari/halva. It is called revani/ravani in Turkish.
It is possible the word “rava” has Arabic roots. This recipe is a variation on the traditional version. Use fine sooji for this recipe.

Preheat oven to 425 degrees. Line a baking pan (9 inch square) with wax paper.
Grease the sides and wax paper base with butter.
Mix the dry ingredients (semolina, baking powder) together.
Place the butter and sugar in a bowl and whip together until light and fluffy. Add the eggs, orange juice and mix well. Mix in the dry ingredients into this bowl until smooth.
Now place this mixture in the greased baking pan and level the top. Bake it in the oven
25 -30 minutes until just firm and golden on top.

Heat the sugar and water in a heavy sauce pan. Add the cinnamon stick and stir gently to dissolve the sugar. Let it boil thoroughly for another 5-7 minutes without stirring.
Remove from heat, add the lemon juice and orange rind. Remove the cinnamon stick.
Pour this syrup on the top of the halva in the pan and let it absorb the syrup. Set aside for 10 minutes. Cut the halva into diamond shapes and garnish each piece with a sliced almond in the center. Place halva pieces on a serving platter and garnish with orange rind on top. Enjoy the basboosa.