Remembrance: The Legacy of Two Chefs 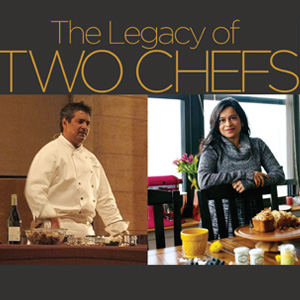 Indian-American chefs Floyd Cardoz and Garima Kothari were trailblazers, creative and passionate about their profession. Their recent demise is a loss for modern Indian cuisine.

The food world recently lost two uniquely gifted chefs—Floyd Cardoz and Garima Kothari. Anyone even reasonably new to the business would soon see them as trailblazers. The food media was quickly abuzz with the news of their passing. Sadly, it became apparent that they would be missed among those who knew them closely, but many didn’t know them at all!

My familiarity with both chefs was relatively recent, and brief. In 2015, I was at the Indian-American Arts’ Councils’ Literary Festival in New York, on a panel with iconic Indian food celebrities Vikas Khanna, Saransh Goila, and Suvir Saran. There was a rumor that Floyd Cardoz was a panelist too. As the only non-celebrity, I was giddy with excitement—our shared love of the Indian cuisine had blurred the lines between celebrity and non-celebrity. Self-consciously, I familiarized myself with everyone’s work beforehand. Chef Floyd’s restaurants had innovative and creative menus, enough to make anyone hungry. I held off on buying his cookbooks, hoping to get a signed copy at the festival in a true fangirl moment. But he never came. I was disappointed.

I learned that Chef Floyd was a very reserved individual, with a classical chef’s training from Mumbai. Despite a traditional culinary career—many restaurants—and many prestigious accolades, he maintained a generous philanthropic disposition and a deeply family-oriented persona. One of his books was called Flavorwalla, after a nickname he had received. He was likeable even from afar! I told myself, “Someday, I will make that trip to his restaurant, I will buy his cookbooks and ask him to sign them.” My “someday” never came.

Chef Kothari was different—she was approachable, perhaps because she was a career transplant in the food business. A Kolkata native, she literally competed for her space in the food business. After competing in MasterChef India, she left her successful investment banking career to study at the Le Cordon Bleu, Paris, and came to the U.S. to become a pastry chef, an events planner, and a restaurateur. She had worked in Miami and New York before opening Nukkad, a restaurant in New Jersey, earlier this year. As a food writer, I became familiar with her work. We were in the same food-writing peer groups. She came across as a genuinely nice person. I felt privileged to see her excitement for her new venture first hand. It highlighted a delicious menu; I hoped to visit them sometime. But as quarantines spread, that was not to be. We exchanged texts one afternoon in late March—she was frustrated that her immigrant-owned small business was unable to compete for relief funds. It made me sad, and we hoped that it would be okay soon. Many people in the food community were rooting for her, hoping that she would shine the way she deserved to be acknowledged. Sadly, that day never came.

The untimely passing of two brilliant culinary professionals leaves a vacuum in the food world. Each had a distinct life path and impacted the personal and professional lives of many. They each came from different disciplines and their creativity won everyone’s heart. With their passion for Indian cuisine, they both added their names to the many before them who changed the vocabulary of modern Indian dining. They continued the classic Indian tradition of adapting to a newer audience. Their departure is a loss to modern Indian cuisine. It’s also a reminder that modern Indian cuisine is everywhere—if we look for it, appreciate it, support it, and let it flourish. We mustn’t wait to recognize the abundant creativity of our culinary ambassadors. They keep us connected to our past and build flavor-trails that will stay with us in the future. They bring us together with the one thing that we all share, a love of our cuisine.

The legacy of Flavorwalla and Nukkad lives on in our hearts and minds. 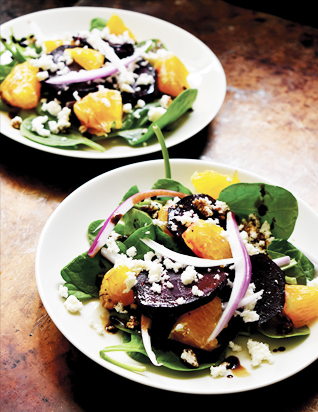 To honor the memory of late Chef Floyd Cardoz and late Chef Garima Kothari, here are two summer-friendly dishes, adapted from or inspired by their repertoire. The simplicity of these dishes highlights fresh ingredients, and makes them adaptable to whatever vegetables may be available.

2-3 segments of orange, peeled and halved

2 tbsp freshly made paneer, or feta

In a small saucepan, sauté the beet slices with olive oil, ginger, salt, and pepper. Set aside until ready to use. When ready to serve, assemble the salad starting with spinach leaves, red onions, and orange segments. Add the cooled beet slices, and sprinkle with paneer or feta cheese. Drizzle with balsamic vinegar to finish. Serve chilled. 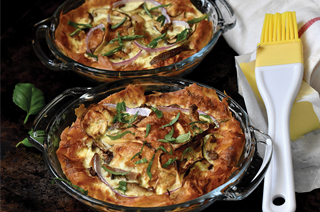 In one container, whisk two eggs, milk, sour cream until fully combined. Add the mushrooms, parmesan cheese, salt and pepper, and set aside.

Grease two small pie pans generously with butter. Work quickly to build alternate layers of butter and phyllo pastry, brushing each layer of phyllo dough with melted butter, no more than 6 sheets. Bake for 8-10 minutes in a 400° F. oven, until the pastry is golden. Remove from the oven and set aside to cool for 5-7 minutes.

Whisk the egg-cream mix to ensure the ingredients are well distributed, and then gently ladle it over the cooked pastry. Add onion rings, if using. Return it to the oven for another 8-10 minutes until the egg mixture is set. Garnish with basil leaves. Serve while it is still lightly warm.

Nandita Godbole is an Atlanta-based author of many cookbooks and a food-novel. Her Ten Thousand Tongues: Secrets of a Layered Kitchen, an autobiographical food-novel, was featured on City Lights–WABE 90.1 FM, Forbes, and BBC-Future, and in an earlier avatar, on NBC and NBC-Asian America.