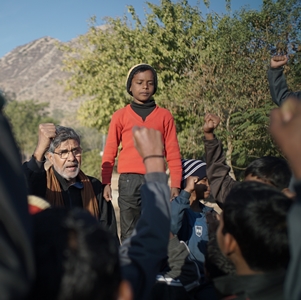 Following An Inconvenient Truth and He Named Me Malala, The Price of Free is another riveting documentary by producer Davis Guggenheim.

The film opens on a frantic note with Satyarthi on a mission to rescue children forced to work as laborers. With apathetic police in tow, Satyarthi’s team breaks down doors and unearths terrified children hiding under sacks in asphyxiating heat from the fear of being caught. The children, whose very childhood has been beaten out of them, can’t tell the good guys from the bad ones. Their mistrust of adults, who by definition should have been benevolent caregivers, is evident in their sad eyes. It is a heartbreaking scene.

YouTube has acquired the prize-winning documentary The Price of Free featuring Nobel Peace Laureate Kailash Satyarthi on his life-long mission to end child labor and trafficking. 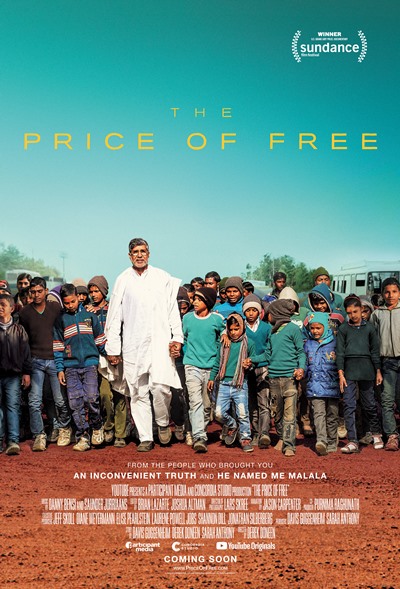 In the 90-minute documentary, director Derek Doneen attempts to encapsulate the laudable achievements of Satyarthi, who was awarded the Nobel Peace Prize in 2014 for “struggle against the suppression of children and young people and for the right of all children to education.”

What the hard-hitting documentary lacks in the way of production finesse, it serves up in the way of content. It deftly shines light on the underbelly of our society where nefarious operatives prey on innocent children to line their pockets, with little fear of retribution from law enforcement officials.

For those of us who are familiar with the pitiful state of India’s “street children,” this documentary is not a window into an unseen world—we must not feign shock and horror. But perhaps after viewing this film, a mosaic of Satyarthi’s personal history interspersed with vignettes of his team’s daring rescue operations, we will be reminded to think of those who remain out of sight, but whose small hands touch us in unseen ways—like the beautifully sewn clothes we wear this festive season and the bells and whistles we purchase to deck the halls of our plush, comfortable homes.

I will watch The Price of Free with my teenage children to inform them about the ugliness that festers in our world and to teach them to become instruments of change. It is time to truly drain the swamp. 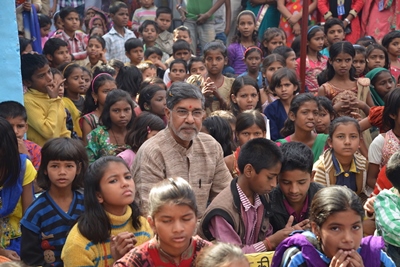 ABOUT CHILD LABOR & CHILD SLAVERY
Throughout history, children have worked around households, on the farm or in the family business. But none of this is defined as child labor. The term refers specifically to work that:
•Is mentally, physically, socially or morally harmful to children,
•Forces children to do labor that is prohibited by national laws for the child’s age,
•Deprives children of the opportunity to get an adequate education,
•Involves trafficking, debt bondage, slavery or recruitment for use in armed conflict, prostitution, pornography, drug running, or any illegal activities.

Under that definition, today an estimated 152 million children around the world are child laborers. This group of children might be cooped up in sweltering factories, picking crops in clouds of toxic pesticides, lowered into claustrophobic mines, risking their lives in brick kilns or construction sites, or dwelling far from home as domestic servants. But what all too many share in common is a lack of nutrition, sleep, school and healthcare not to mention love, fun and guidance.

So why does this happen? It is a vicious circle. Most children go to work because their families lack sustained employment for adults, so their survival depends on it.

Meanwhile, the global demand for cheap, unskilled labor means there is always a profit to be made from putting children to work for little or no pay. Since children are more easily controlled and less likely to complain about conditions, they are often exploited for precisely the kinds of labor adults would balk at. The final turn of the vicious circle is that when child laborers grow up, having been deprived of education...their own children are sent to work perpetuating the cycle on and on. 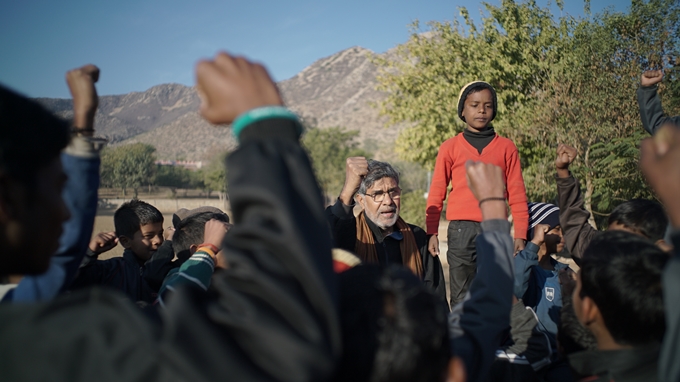 But this cycle can be broken. If slavery never really ended in the industrial age, as we sometimes believe, it can end here and now if humanity so chooses. Kailash has proved that making this happen is not just a pipe dream. His message is now spreading to many who might not have realized they can be part of this transformation. He points out that ordinary citizens in every country can help push the movement forward in simple ways: by refusing to purchase goods made by children, by insisting on greater transparency about what we buy, and by keeping the pressure on to stop the cycle of child labor for good while we have this chance.

Says Weyermann: “As Kailash says, if a product seems too cheap, there is probably a reason. Consumers in the U.S. and around the world can start to understand that the products they buy are at the end of a global supply chain. We may not have visibility to all the links in this chain, but the more we know, and the more we demand to know, the better choices we can make. There are already companies committed to producing child-labor free products and who are stepping up to lead the charge in the manufacturing space. We have seen time and again that when consumers raise their voice and vote with their dollars, companies really do listen.”

Anthony points out that there are many pressing reasons to address this problem right now, including the looming risk of terrorists employing children as soldiers. “Kailash has been talking a lot about how terrorists are now recruiting vulnerable children, so giving children greater safety is something that makes us all safer. This really is about the future of humanity.” 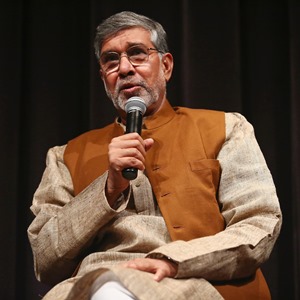 CREATING A GLOBAL MOVEMENT
Though the events of The Price of Free take place in India, Kailash’s work extends to other countries, and since the second he made his promise, he has been thinking on a planetary scale. That’s why he is now in the midst of building a fully worldwide citizens movement for children’s rights—the kind of galvanizing movement that throughout history has turned the tide against the most unacceptable injustices. Typical of Kailash, this globe-spanning effort is also highly targeted, aimed at the very same young people who hold the key to our planet’s future.

To reach as many as possible, he has launched the “100 million for 100 million” campaign, which aims to recruit 100 million young people worldwide to speak out on behalf of the voiceless 100-plus million in child labor—and in so doing, encourage and support the leaders of tomorrow.

Says Guggenheim: “I think most of us in the West, until recently myself included, are unaware of the terrible human cost that comes with the lifestyle we lead. We love that so many things are cheap and we can get what we want and not have to think about it. I believe Kailash can succeed in ending child slavery, but first he will need all of us to become more tuned into how our personal actions are connected to people on the other side of the world. 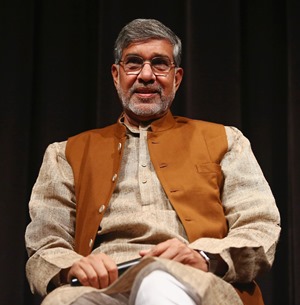 That’s why Kailash’s advice is something clear and achievable, something that takes just 3 words: “Do your bit.”He knows we have the international tools to stop slavery for good. It will take a sweeping wave of public will to ensure we use them, but it’s that simple. What does that bit entail? “It’s practical, doable steps,” says Anthony. “If we can label a banana organic we can label a shirt child-slavery-free. As consumers, we can demand that transparency. But first we need to start the conversation, and just get it on people’s radars.”

Doneen concludes: “I think the first level is just to start talking about the mind-blowing reality that 1 in every 10 kids around the world, 152 million kids, are being forced to work at the cost of their childhoods. Then, there is so much that can be done—whether it is putting pressure on governments to better enforce laws on child labor; pressuring companies to regulate their supply chains; becoming a more conscious shopper; or getting involved in Kailash’s organizations or others that provide assistance to exploited children. Hopefully, the film is an entertaining way to make people more aware not just of how big a problem child labor is, but how possible it really could be to achieve what Kailash dreams of ... if we can just, each of us, tap into a little bit of his commitment.”

ONE WAY TO TAKE ACTION:

WHO REALLY MAKES THE THINGS YOU BUY? Child labor is often hidden — from consumers and even from brands themselves. From cotton to coffee beans, bracelets to bananas, children as young as five help make the stuff you buy and use every day. Companies and industries have the power to change this. Use this form to ask the top 100 U.S. retailers how they’re working to ensure their products are child labor-free — and urge them to be leaders in the fight to free every child. The more messages companies receive, the more they will feel consumer pressure to strengthen their policies and practices to protect children from child labor.

YOU CAN SEND A MESSAGE:
To the leaders of America’s retailers: I would like to know if child labor is used in the creation of products your company sells. I know child labor is a complicated issue, but after learning about Kailash Satyarthi’s mission to free every child in the film, The Price of Free, I would like to make sure you are doing everything possible to combat this global issue. Please answer the following questions: - How do you ensure that your supply chains are child labor-free? - How do you and the brands whose goods you sell, handle suppliers found to be using child labor? - What does your company do to make sure your employees are educated about child labor and empowered to stop it? I hope to hear from you soon.

Here is the link that makes it easy to send the above message.