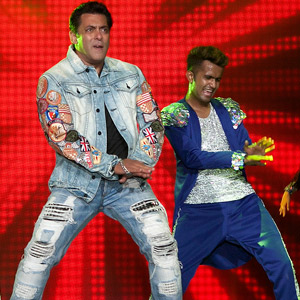 Atlanta was the launching pad for the North American tour of this star-studded extravaganza, giving us four-and-a-half hours of highly charged performances (mostly). Everything about the show was outsized: the build-up towards it, the dazzle, the recordbreaking turnout, and, of-course, the star line-up, with bad boy Salman Khan on the top of the totem pole.

Swag se kiya sabka swagat! That much Atlanta can surely claim: the city’s, state’s, and the region’s desi population went all out in welcoming the Da-Bangg gang—so much so that this one goes down in the history books for the largest turnout ever witnessed for an Indian show. Estimates of the count range from 10,000 to 11,000!

Besides the stars themselves, the credit for pulling off such a massive show goes to Rahim Paracha, who has risen to the top as one of Atlanta’s most credible show promoters. Ever since he did his first event—a Jagjit Singh concert, over 20 years ago—Paracha has delivered many memorable events with professionalism and passion. With his partners, Prosperous Entertainment and 27th Investments, they delivered the goods, thereby redeeming Atlanta as a promising stop for major productions such as the Da-Bangg show.

At the arena in the Infinite Energy Center, the atmosphere was charged. The cumulative effect of thousands of people, high decibel music, dazzling lights, and stars who have legions of followers—is a buzz and a high that would make even the mundane seem exciting. Fortunately there was very little mundane about the Da-Bangg Reloaded show, which was scripted and directed by Sohail Khan Entertainment and JA Events.

Following are some hits and misses from the show.

• Anchor Maniesh Paul set the tone with his irrepressible energy and vibe. With his flair and humor, and friendly digs directed towards Gujaratis, Punjabis, and others, he kept the audience engaged.

Daisy Shah (left) started it out with some good digs at her Gujarati self, moving on to belting out some of her popular numbers from films like Jai Ho and Race 3. 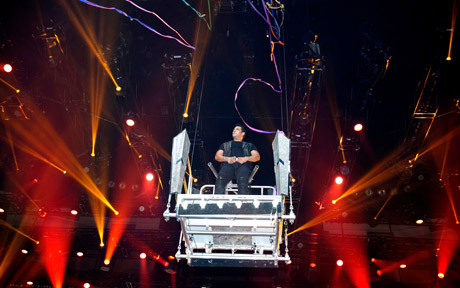 The man of the show, Salman Khan (right), owning his grand entry, like a boss.

• The grand entries of the stars befitted their top billing. Elevated on platforms high up in the arena, and slowly “flown” across the length of the place, Salman Khan and Katrina Kaif, whose solo entries were at separate times, both seemed like celestial stars in the heavens while thousands of “earthlings” below were veritably worshiping them with a crescendo of cheers and swoons, and some with just agape faces of wonder.

• Salman Khan, the star attraction, danced to a medley of his chart-busting songs from Maine Pyar Kiya to Race 3, showing off his quirky ‘jag ghoomeya’ step several times: spinning on the floor, then bringing one foot over the other knee. In the second half of his act, he grooved with his leading ladies to chart-busting songs, and delighted his fans when he sang with considerable finesse.

Looking like a Greek Goddess, Jacqueline Fernandez (above) packed a punch with her high energy performance.

Sonakshi Sinha (left), who, they said, had just flown in, was rushed to the venue direct from the aiport. But she proved she was ready to roll!

• Leading ladies—Katrina, Jacqueline, Sonakshi, and Daisy—had fun putting their best foot forward and looked gorgeous in their elaborate costumes while exuding girl power. Sonakshi had a special surprise for her fans, rapping her own version of Yo Yo Honey Singh’s “Love Dose.” 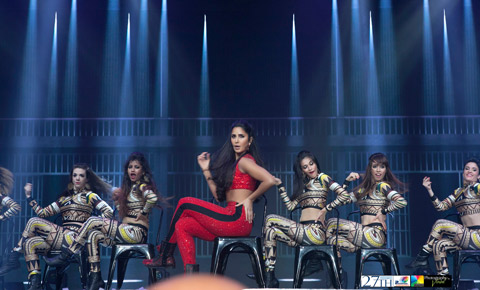 Red-hot Katrina (right) was in her element as she performed her chart busters like “Sheila Ki Jawani.”

• The grand finale where all the stars came together to dance to “Allah Duhai Hai” from Race 3 was indeed grand. This high energy finale went a long way in redeeming the show, after having hit a couple of phases where the show dragged and many of the audience were seen leaving.

• The biggest disappointment of the night had to do with the star attraction, Bhai himself, Salman Khan. Despite his trademark moves that got his fans going, he seemed spaced out and low energy at times. In his defense, it must be pointed out that the man had just flown from India the day before and would surely have been jetlagged. But that is something the producers and organizers should have accounted for. When audiences have paid as much as upwards of $500 per ticket, they expect the stars to be in top form and energy.

Worse, Salman Khan had almost no direct interaction with the audience. Why would you do live shows in front of fans that worship you, if you are unable or unwilling to hang loose and interact with them? Even in those unscripted parts when three ladies from the audience were selected to come up on the stage to dance with the heartthrob, the star seemed listless and scripted, instead of taking the opportunity to make a true heart-to-heart connection with his fans.

A comparison with Shah Rukh Khan may perhaps be unfair, but one can’t help but look back fondly at the memories of the Temptation Tour in 2004 when SRK had the audience in his palms, in what was then called the Gwinnett Arena. Salman may have top billing as a film star, but as a stage performer he falls flat when it comes to going beyond his trademark dance moves. His live presence was quite underwhelming.

• Singer Guru Randhawa certainly had a spirited performance, and yet his time on the stage was a blemish, and perhaps for no fault of his. What were the directors thinking when they converted an entire 30 to 40 minute routine of his into a Punjabi show? Of course, thanks to the beautiful diversity of our regional languages and culture, desi shows have a unique opportunity to connect with these sub-audiences in shows. A little Gujju joke here, one or two Punjabi songs there could well add to the eclectic mixture of a show.

Randhawa not only went on for more than half-an-hour belting out one Punjabi song after another, but even between the songs his audience interaction was completely in Punjabi. Being so tone deaf to the fact that you are alienating more than a sizeable majority of your audience who are not Punjabis is, at best, poor judgement, and at worst, a flip of the middle finger to the majority of the audience who can’t get into the act.

A far bigger entity such as A. R. Rahman has gotten into trouble for doing precisely that—ignoring a majority of his audience by making a bulk of his concert a Tamil one. And while Rahman’s music may be seen as one that transcends language barriers, Randhawa’s particular brand doesn’t have that quality.

• Lighting, more precisely, the light show is an integral part of such an extravagant stage production. As a frequent consumer of a variety of shows, I have seen some fantastic ones where the light show truly augments the main performance. But at the Da-Bangg show, the lighting appeared to be on steroids. Instead of aiding the performances it seemed to compete with the stars, causing distraction and disharmony.

All in all, there was much to like about Da-Bangg, especially for the young, enthused Bollywood fans, hanging loose with friends, high on spirits, and an itch to party.

For the rest of us jaded folks, the hype far outpaced the delivery. Atlanta has seen better shows.

Some reporting in this article is by Veena Rao, NRI Pulse.