Sitcom: My Complicated Relationship with Devi 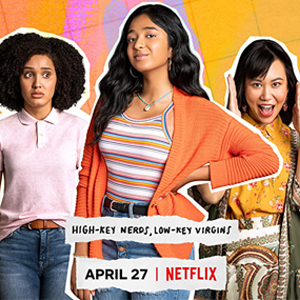 MIRA SYDOW, like so many viewers, was excited to watch Mindy Kaling’s Never Have I Ever on Netflix, not least because a sitcom about Indian-Americans was long overdue. But while its pleasures are many, so are its shortcomings. “For every beautiful representation of culture, the show also enforces a stereotype about various cultural groups,” she notes.

Two weeks before Mindy Kaling’s teen dramedy came out, I watched the trailer on YouTube. Within the first few seconds, I’d sent it to half of my friends with the simple caption, “finally.”

A few weeks later, I was a little disappointed.

The series follows Devi, a teenage Indian girl trying to discover her identity in the wake of her father’s death. She faces conventional immigrant struggles, like relating to her culture as an Indian raised in America, and trying to measure up to her mother’s standards, and she also faces classic high school setbacks, like getting into a high-ranking college and finding a boyfriend.

Devi and I are pretty similar—we try hard in school, compete in Model UN, enjoy diverse friend groups, and struggle to fit in with Indian culture (I’m mixed, only a quarter Indian, and Devi is just reluctant). I immediately saw a bit of myself in her. The show’s main draw is its diversity, especially the fact that it centers around a teenage Indian girl. To be honest, I’m not sure yet if the show builds up or tears down the perception of Indians in the media.

Let’s start with what it doesn’t accomplish. It stands behind stereotypes of Indian parenting. At the beginning of the series, Devi’s father passes away (which is a major plot device), and her mother is left distraught. As a result, Devi’s mother becomes harsher on Devi. Although she has a strong, developed character and functions as a powerful single mother, she supports the idea that all Indian parents are strict, abrasive, and extremely religious.

The show further enforces this concept when Devi attends a puja. While her mother is occasionally characterized as forgiving and soft, the other Indian adults Devi encounters are never given this courtesy. The show describes aunties as cultlike (which, arguably, they are) and intolerant of members of the family-friend group who do not abide strictly by tradition. In my experiences, most real-life aunties are nurturing and attentive, essentially family, and their traditional beliefs are accompanied by a deep love and respect for their culture.

Lastly, the series enforces sexism as a tenet of Indian culture. One of the characters, a cousin of Devi’s, is pursuing her graduate studies at Caltech, and her Indian family expects her to abandon her career and aspirations to serve her husband in an arranged marriage. The characters repeatedly poke fun at their culture’s sexist beliefs, but the fact that these misogynist expectations are present in the show supports the idea that traditionalist Indians are always sexist.

However, despite Never Have I Ever’s downsides, Devi’s character is a refreshing take on an Indian teen. She’s not a great person—she’s rude, spiteful, and arrogant— but because of this, she’s totally unconventional. She doesn’t fit the mold of a stereotypical obedient brown girl, and her social circle expands far beyond her Indian family friends. Devi is a hardworking student, not because of her parent’s or culture’s expectations but because she’s fiercely competitive and driven. Additionally, she’s a rule breaker. She drinks alcohol when she can, sneaks out to attend parties, and tries her hardest to be sexually active.

Furthermore, Devi’s family is revolutionary for Indians on TV. Devi’s late father was gentle and nurturing, and her mother dominates the household, an inverse of what is typically portrayed in Indian households. Devi’s cousin, who also lives with her, is a beautiful and capable woman with a formidable degree. While Devi’s cousin is ignorant of American customs, she redefines what it means to be Fresh Off the Boat by being charmingly naive instead of embarrassingly unaware.

So, in conclusion, the show does a lot of things wrong, but it also does a lot of things right. Reflecting on my experience, I think I felt a little disappointed after watching it because I’d built it up so much in my mind. I ignored the simple truth that even Mindy Kaling can’t completely rehabilitate the image of Indian-Americans in the media, and the show fell short of my expectations because I held it to this impossible standard.

At some points, the acting was cringe-worthy, the story was unresearched (mostly just the Model UN episode), and the side characters were walking stereotypes of a non-Indian culture, but at other moments I felt understood in a way I’d never felt before from television. In this case, I think, the representation of young Indian-Americans as powerful, independent characters far outweighs the sin of enforcing a few negative stereotypes.

Mira Sydow, a 2020 high school graduate, will attend the University of Pennsylvania in the fall. Having interned at Khabar in 2018, she continues to enjoy contributing a youth perspective.