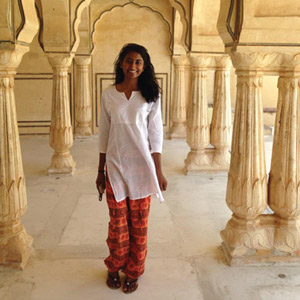 Indian, and yet not Indian. That’s a shifting mind space every American-born of Indian origin must negotiate and come to terms with—with no neat resolutions around. Nineteen-year-old Kavya recounts a summer internship to Rajasthan with her American classmates that brings up many fascinating, puzzling perspectives about her feelings for her native land, and more importantly, about her own dual identity.

The number of times I have had to answer this question over the past seven weeks in India is probably greater than the number of times I have been asked my name since being here. But somehow, there is still always an internal struggle as I am forced to evaluate my background and come up with an accurate response. Sometimes, I take the easy way out and reply with a curt, “Because I am Indian,” quickly trying to move on before the questioner asks about my American accent and my clearly American peers who I seem to be a part of. Other times, however, I elaborate, “My parents grew up in India, but I was born and raised in the United States”—an answer that still often stirs up weary feelings about having to explain my dual identity.

I arrived in India seven weeks ago as the wide-eyed, nostalgic girl that I am every time I step off that long international flight. One sniff of the surrounding air, naturally heated to least 10 degrees above room temperature and sustaining a highly precise mix of scents that, after all these years, I still cannot put my finger on, and I know I really am back.

Usually my entry into the heat-ridden, bustling country in the summer time is accompanied by those of my parents and older sister; however, this summer was an exception. Instead of three people well-versed in the customs, culture, and language of my home country, I was walking in step with ten other college students, all from America, all geared up for our two month internship program in the city of Jodhpur, Rajasthan. Suddenly, and for the first time, I was the person in my arrival group assumed to be able to speak the local language and be most familiar with the nuances of the local society and the culture.

Perhaps the first time I realized that this experience in India would be a lot different for me than my usual two week vacation with family was when I first went out to town with my company. The loud, rambunctious college-aged Americans that we were, we certainly drew a great deal of attention to ourselves only minutes after stepping out, and, in turn, were quickly surrounded by a large crowd of auto rickshaw drivers who were fully aware of the financial gains they could make off of our foreign naiveté. After making utter fools of ourselves trying to bargain a fair price, we piled inside and I got ready for a ride in a vehicle that was far from unfamiliar to me.

Not two seconds after rolling away, however, four iPhones popped up around me, capturing the “auto selfies” that I would see on Facebook for days. Unknowingly, I found myself reaching into my pocket and pulling out my own device, capturing photos of a means of transport that I had seen and ridden on every time I came to India, as if it were a novel experience and a memory I needed to preserve for fear of never having it again. 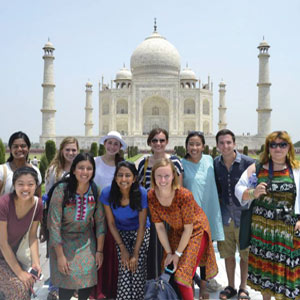 The author’s trip to her native land with her American peers stirred some thoughts about her identity.

When we got out at the local bazaar, I found myself, along with my classmates, ooh-ing and aah-ing at the bright, beautiful colors and exquisitely crafted clothes—colors and clothes that I saw and wore every time I opened up my closet back home in the U.S. when deciding what to wear to a temple function or an Indian family friend’s party.

It was only a few days after entering India that I realized that I had become a foreign visitor in a country that I considered my home. This realization danced around in my head for a while, and then suddenly charged and jabbed me in the stomach. I was lazily speaking English when I knew I had enough Hindi skills to communicate and perhaps even get by as a native. I encouraged complaints by my peers about bucket showers and the lack of toilet paper with my own nods and an occasional “Yeah, I know,” even as the voice in the back of my head pointed out, “You never minded before.”

I guess it does not really strike you how different India is for a 15-year old girl coming to visit and vacation in India for two weeks with her thoroughly Indian family, and a 19-year-old girl interning in India for two months alongside her American university friends until you are actually experiencing it yourself.

In my prior visits, I had never experienced a situation in India where my external appearance did not allow me to blend in and be recognized as a fellow native, hiding behind the perfect desi accents of my parents. But now, I was having to constantly explain myself and evaluate my origins as a person who is surrounded by Americans, speaks English with an American accent, and still somehow looks like an Indian—both to myself and to those around me.

Whether intentionally or not, I could see that I was distancing myself from my Indian roots, and rather, just taking part in experiencing India as the far-off, exotic country it was to those around me. Immersed in the outlook of my peers, I was painfully aware of the incredible amounts of trash on the roads, the lack of air-conditioning, and the constant power outages—things that had not bothered me in my prior visits. I recognized that there were several aspects of the country that I had overlooked in those short visits. Instead of living out of a suitcase in my upper middle class relatives’ households for a few days, this time I was actually living in the heart of India for two months, constantly seeing, interacting, and working with the poverty-stricken citizens that made up the majority of the country, bargaining with shopkeepers myself, and looking forward to coming home to cool water, after a long, hot day. I was seeing India in all its reality for the first time.

It has recently occurred to me that as much as my trip to India alongside my American peers may have resulted in a slight deterioration of my previously idealistic view of the country, it also just as often flared up as an intense pride inside me. I found myself taking note of the good that my American peers saw in India—the inherent trust between rickshaw drivers, the fun of bargaining, and the incredibly fresh taste of mangos. Any time we ate a particularly delicious meal, I found myself exclaiming, “My mom makes this all the time at home.” A visit to a temple would result in me briefly explaining to my curious contemporaries the stories of the gods and goddesses that I grew up with. And when a friend started belting out “Desi Girl,” or any other catchy Bollywood song, my face broke out in an incredible smile at this acceptance and appreciation for the country’s pop culture.

For the past seven weeks, I have seen India in a way that I never have before—a way that has brought out the ABCD (American Born Confused Desi) in me perhaps more than I would have liked. My “otherness” puzzled some in India. And it also left me wondering why I feel American in India—even though I am both through and through. I am still not sure that I have a satisfactory answer.