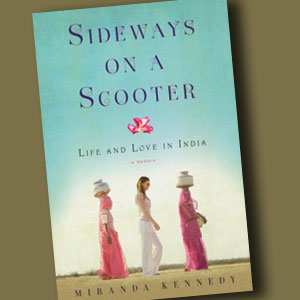 Woven into the narrative of Miranda Kennedy’s book is a good mix of India’s political and cultural history and its impact on present-day India. She takes up the subject of Indian marriage, viewing it through the experiences of six women and her own stint as an India-based reporter for NPR, and examines how globalization and modernization are changing it.

SIDEWAYS ON A
SCOOTER: Life and
Love in India
By Miranda Kennedy,
Random House, 352 pages.

Miranda Kennedy describes Indians as the most emotive, passionate people she has ever met living in the most emotive place she has ever lived—India. Kennedy worked in India from 2002 to 2007 for National Public Radio (NPR) as a reporter. She brings her adventures to life in Sideways on a Scooter: Love and Life in India, titled after the demure way women so frequently sit on the back of mopeds in the congested traffic of India’s cities. India was never a stranger to Kennedy’s family. Her great-aunt Edith lived in India for 36 years as a missionary and taught girls how to read, and her parents experienced South Asia when her father became a Fulbright Scholar at the University of Karachi in Pakistan. She writes about how her mother, inspired by Hinduism, converted the whole family to vegetarianism, and recalls explaining to her sisters that name-brand clothing was not in line with Mahatma Gandhi’s philosophy.

When she moved, Kennedy did so from New York City to the capital whose hustle-and-bustle could put the U.S. city to shame. She writes that her parents weren’t shocked when she told them about her big move, but when she did land up in New Delhi the young journalist met with a host of new experiences in a country that seemed to have a cultural identity crisis within itself.

As a bachelorette, Kennedy writes about the challenge of having to find an apartment in the big city as no one would rent to an unmarried woman who wanted to live alone. Brashly told by a landlord, “We are not interested in girls of your type here,” Kennedy longed to discover how she could be the right type of girl to get an apartment. The book describes her journey through the perspectives of six women representing India. She meets Parvati through the Indian Press Club and is befriended by the fast-talking, whiskey-drinking journalist who challenges the conformities of a typical Indian girl by not wanting marriage or children and by being in a relationship with a man who is separated from his wife. Parvati is a contrast to Geeta, who dresses in Western attire and works in a public relations firm, and yearns to be seen as a modern girl, but is still pleased by the idea of an arranged marriage that she thinks will lead her to a happily-ever-after. Kennedy’s exposure to the notorious caste system comes when she finds herself having to hire domestic help. She hires an illiterate upper-caste woman, Radha, who will simply not do some duties because of her “high” status. So the author has to employ Maneesh, who is considered an “untouchable,” to take out her garbage and do other things that Radha will not consider doing.

Woven into the narrative is a good mix of the country’s political and cultural history and its impact on present-day India. Kennedy takes up the subject of Indian marriage, viewing it through the experiences of the six women and her own stint as a reporter, and examines how globalization and modernization are changing it. She writes, “I’d expected a much more modern and globalized country than I found. I anticipated poverty, but I also thought I’d find a large, liberal-minded middle class that would approximate my own Western experience. … In fact, I would learn, nothing in India is straightforward.”

“It became a big question of tradition versus globalization,” says Kennedy, “but in the end, tradition wins hands down because it’s the part of India that has not globalized and it remains much localized.”

She describes India’s journey to materialism and the rise of its middle class, but points out that Mahatma Gandhi is still venerated, perhaps paradoxically, as the “father of our nation” for his frugality.

The honesty of Kennedy’s memoir is refreshing for its view of India from two perspectives: one of a foreigner and the other, of a journalist. The book throws into focus the contrast between the India we read about in the news and the India we see when we visit. “India is not a simple place, it’s not binary,” muses Kennedy. “There is so much of experience and so much of the country is localized, so change is slow because it all has to do with where you come from and expectations one has to meet because of the way you grew up.” Kennedy’s candor will strike a chord with expatriate readers who often see their home being revered overseas, but find, when they go back to India, that the problems they left behind haven’t gone away. [Devika Rao’s weekly column, “Doing Good: Metro Atlantans helping others,” appears in The Atlanta Journal-Constitution.]