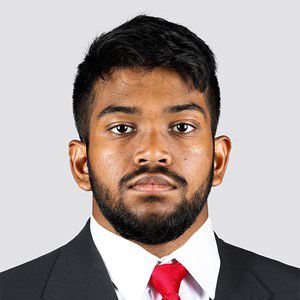 Kaustov Chakrabarti, a wide receiver for the Georgia Bulldogs, is the first Indian-American to play on the elite UGA football team as well as in the NCAA Southeastern Conference. That makes his journey into the limelight an inspiring one full of hope and resilience—considering it began in the darkest moments of irrecoverable personal loss.

Fate dealt Kaustov Chakrabarti a merciless one-two blow when he lost both his parents in a span of three years while still in high school. Misfortune cannot be coaxed to retreat, nor can it be evaded with cunning. Kaustov tackled it head-on. It is with grit and gratitude that he continues to draft his story of triumph penned in tears and tributes.

Kaustov grew up in a loving home in Lilburn, Georgia. He attended Parkview High School, all the while focusing intently on his studies. But it was not just studies that interested him. He played left wing and attacking positions on a Gwinnett Soccer Association team. Not just that, he also practiced the violin with soulful ardor.

Reviewing the reel of his early life, his childhood was a perfectly orchestrated, typical arrangement of predictable and happy moments. Going for Durga Puja every year and seeing friends was one of the highlights of his childhood. Kaustov was the quintessential Indian student who thrived in a nurturing home and channeled his parents’ traditional aspirations.

But this happy childhood was soon shattered. In his freshman year, when Kaustov was just 14 years old, his father succumbed to brain cancer. Were life a football game, one could charge fate with a personal foul. As if this wasn’t enough of a foul, in the first semester of his sophomore year, Kaustov’s mother was diagnosed with breast cancer. This time around, one would perforce hold fate accountable for unsports-manlike conduct.

Kaustov’s mother struggled to pay the bills and make ends meet while he worked at Chick-fil-A to alleviate in some measure their financial burden. They shuffled apartments as she battled cancer. The dimensions of his home shifted and shrank; the shadows of doom around him grew in scope and intensity.

[​Right] Being on the roster of the Georgia Bulldogs is a proud achievement for any college freshman, and more so for an Indian-American youngster, who, only a couple years back, was considering dropping out of high school due to the personal tragedies he had faced.​

In junior year, while Kaustov’s peers charted their course to dream colleges, he suffered the death of his only surviving parent. Kaustov was rendered home-less and heartbroken. “I couch-surfed with my friends for a while. Then my aunt and uncle in Lilburn took me in. They helped me a lot.”

“Before my parents died, I was aspiring to go to John Hopkins,” recalls Kaustov. After their untimely passing, attending college became a distant dream for which Kaustov had neither the means nor the mental strength. As his morale and grades slumped, Kaustov considered dropping out of school.

Around that time, a high school counselor introduced Kaustov to the program, StandUp For Kids. “I had nothing to lose, so I decided to join. I was paired with Deanna Simmons, who was a nurse at Piedmont Hospital, and who has now retired.” That introduction became a game changer. “She gave me advice and wisdom on my plans for college,” Kaustov remembers fondly.

“I was Kaustov’s mentor for almost three years. We hit it off right away,” says Simmons. “Everyone who meets him sees what a fine young man he is. He is an amazing person. I went with him last year to a fundraiser for StandUp For Kids where he was to speak. I kept telling him to write down his notes for the speech, but he never did. And yet, he did an amazing job of speaking from his heart to this large group. I can’t wait to see what Kaustov does further with his life.”

Kaustov also credits another mentor, Jack Hamil-ton, an engineer, for teaching him valuable life lessons. Kaustov sums up what he learned from his mentors thus: 1. You will mess up on your journey in life; take it as a lesson rather than a failure. 2. Love what you do, so your motivation and discipline run deep. 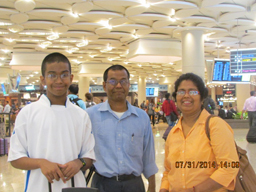 [Left] Kaustov with his parents during happier family times.

He grasped these axioms as steadfastly as he does passes on game day. He dug deep, woke up at 3 am every morning for months, and persevered to finish the semester with all As. He crafted his own playbook to cope with grief. He watched videos by Eric Thomas, a motivational speaker. Maxims like “sacrificing everything to chase after a dream” and “It takes 30 years to be 30 years old, do not rush the process” moved Kaustov. “Watching motivational videos, finding and doing things I loved, and understanding that life is about taking a lot of loss and still fighting back helped me get through tough times.” He played soccer, learnt to cook, and studied the tenants of Hinduism. He found solace in playing the violin. “Concerto in A minor by Bach, 4 Seasons by Vivaldi, and the Lion King music are some of my all-time favorites.”

Like many Indian parents, Kaustov’s father and mother had kept sports on the fringe, steering his focus on academics. And like most protective Indian parents, they deemed football a dangerous sport. “Few South Asians play football and other college sports due to extreme focus on academics. Parents are scared that playing a sport at a high level will take the focus off their child’s academics. To go along with that, there is also an innate fear of getting hurt in football,” explains Kaustov.

He says further, “After my parents passed away, I realized that there is more to life than just a 4.0 GPA. That is when I looked at sports more seriously and realized that I wanted to play for UGA. I sort of wanted to try something new, but never had the chance to play football due to my parents’ fears of the sport.”

With no one to mandate his interests and with nothing left to lose, Kaustov let his passion inform his next move. Life had not played fair; Kaustov responded by changing the rules of engagement. In the second semester of his junior year, Kaustov stepped onto the football field… and never took his eye off the ball. He found he had in himself all that was needed to meet the challenges of the grueling sport, and soon landed the position of wide receiver for the elite Georgia Bulldogs, famous for their passion for football. His team won the regional championship, their first time since 2004. Unfortunately, due to an injury that required knee surgery, he could not play in that game and for much of the season. He is looking forward to coming back with full vigor next year.

At 5ft 7 inches, Kaustov must maintain peak athletic form to play his position. “It takes speed, elusiveness, agility, and quickness to play wide receiver. I can run really fast; my 40-yard dash time was 4.6 seconds, which is in the middle tier for athletes at the D1 level.”

He prepares for big games by listening to bhajans and mantras the night before, to calm his mind. “I have to remind myself that whether I win or lose, I am playing the game I love through the blessing of God. On game day, I listen to rap music to hype myself up to make sure I can play the game at a high level.”

Kaustov’s rigorous athletic regimen and academic schedule require monumental discipline and stamina. Says he, “I have gruesome practices Monday through Thursday and 7 am workouts in the weight room three times a week.” Every night after practice, he plays the violin for fifteen minutes.

Being an elite athlete is fraught with challenges. “I have little to no free time, little to no energy, and a lot of pressure to perform on the field and in the classroom. On top of all that, I have to be timely to all my classes, practices, meetings, and workouts. So time management is a must.”

The rewards, however, outshine the hardships. “I am in the top one percent of physically fit people in America. I get free gear and free food. I learn life skills. I have become a better man, I work hard towards a common goal, I’ve learnt teamwork.” He feels honored to be recognized and “to be given the opportunity to earn the respect of the best coaches in America.” 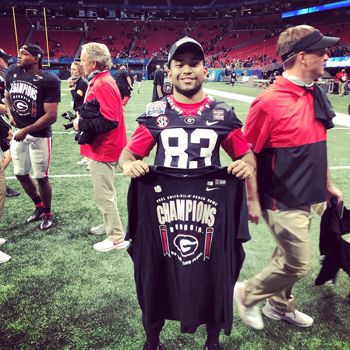 When asked how he imagines his teammates would review him, he has this to say, “Kaustov Chakrabarti is an elite athlete who is the epitome of hard work and sacrifice. He does not let his past nor external circumstances control his work ethic, and it is reflected by the attitude he shows when he shows up to practice every day and by his character. Kaustov has proved that no matter what life deals you, it is never impossible to chase after a dream, and that with necessary sacrifice and perseverance, any obstacle can be overcome.”

[Right] Kaustov taking pride in his team’s regional championship victory at the Peach Bowl in January.​

Kaustov is the first Indian to play with the Bull- dogs, making him also the first Indian in the history of the Southeastern Conference Club (SEC) history. He knows of only one other Indian who plays at his level. “Kartik Akkihal at the University of Texas-Austin and I are the first two Indians to play college football in America and our respective conferences,” he informs.

His determination in class mirrors his athletic tenacity. He finished his senior year with all As and Bs, a feat even for the most arduous student buttressed by the presence of resourceful parents, mothers, and fathers directly invested in the acquisition of stellar grades and prestigious college placements. Recognition came in the way of the Health Occupations Students of America (HOSA) scholarship. He received a full academic scholarship to the University of Georgia for a BS degree in Psychology. “I was in my hotel room at the HOSA Student Leader-ship Conference when I got the news. It felt like I had actually accomplished something in life rather than just giving in to the pressures. UGA is a great school, so it gave me confidence that I could do anything if I put my mind to it.”

Kaustov chose Psychology as his major to better understand the human mind and behavior. “I wanted to learn the psychology behind the actions we take. I love learning how people process certain situations and react to them,” he says.

Kaustov aims to attend medical school and become a neurosurgeon. He also aspires to play in the National Football League (NFL). No matter the team he represents or score on the board, Kaustov Chakrabarti is a winner every time he laces up.

Reetika Khanna, author of Kismetwali and Other Stories, is an Atlanta-based freelance writer who likes to spotlight people with purpose. She can be reached at reetikakn@gmail.com. You may also respond to this article at letters@khabar.com