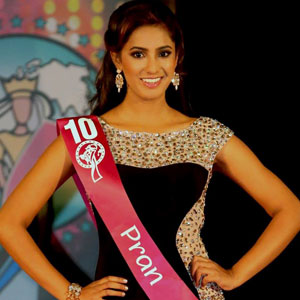 (Left) Pranathy Gangaraju steals the crown with the score of a perfect “10” in the evening gown round. (Photo: Ajith Lens)

Meet PRANATHY GANGARAJU, who, besides being a beauty queen who brought home to Atlanta this coveted national crown, is an inspiring and talented young woman with an eye on a film career.

How cool would it be to see an accomplished beauty from our local Indian community starring on the big screen in an Indian film, or perhaps even in a Hollywood flick? In most cases it may seem like a pipe dream, but not so in the case of the stunning and talented Pranathy Gangaraju. “Acting,” says Pranathy, “has been my ultimate priority, even before I came to know about participating in beauty pageants.” “I completely enjoy the atmosphere of the art form,” she elaborates.

Not surprisingly, the beauty pageant route was a natural outcome for someone of her interest and ambition. What was not so natural, and what has set Pran (as she is known amongst friends) apart, is the rapid progress and accomplishments she has put under her belt in the pageantry circuit. In 2013, she won Miss Prettiest Eyes and Miss Congeniality in the iLink Professionals Miss India Georgia contest. This was followed by the 1st runner up title in 2014 in the same forum.

“Resolve” and “application” are two qualities that come to mind seeing what went into Pran’s leap from a local pageant winner to the national title. “I made a decision to take it to the next level, and realized that everything needed to compete at the national level had to do with paying more attention to detail.” Having competed in Miss India USA 2013, Pran had a good idea of precisely what she needed to work on: the walk! “The walking style over there was not a traditional pageant walk, but more of a modern runway walk; and I am very weak at model walks, so that was the toughest part for me. Then I realized the key to having the perfect walk is filling your whole body with positive energy and a welcoming presence.” 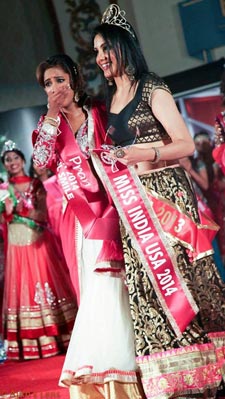 The moment! An overwhelmed Pranathy when she was just declared Miss India USA 2014. (Photo: Ajith Lens)

Pran’s diligence, along with her striking beauty and personality, paid off handsomely. In the over 30-year history of the Miss India USA title, she goes on to become the fourth Georgian to bring home the title [Prior Georgia winners were Icha Singh (1992), Ratna Kancherla (1993), and Meghna Nagarajan (2003)]. Edging out 20 other highly accomplished beauties who rose through their ranks in their respective states is reason enough for celebration and elation. Talking about her feelings at the time of the crowning, she says, “There are no words to describe the feeling of winning something so prestigious. I felt shocked and excited all at once. While I was on the stage I just had this rush of adrenaline, wondering if my name would be announced, until the audience repeatedly kept on screaming my name. I almost wanted to burst in tears. The feeling of winning the crown was the happiest moment in my life.”

“Happiest moment in my life?” But what about the fact that this flagship pageant was in recent years cancelled by the India American Cultural Association (IACA) on the grounds that amongst other things, such beauty pageants were against Indian culture? (IACA has since restarted the pageants). It seemed like an important concern, and who better than the participants to answer to that? So we pressed Pran to check if there was anything about her pageant experience that made her feel exploited, or if it induced any feeling that she was selling out on her Indian culture. “Far from it. I never felt exploited in participating in Indian pageants. Infact it empowered me to speak about my opinions and values with full confidence, since there is so much history and depth on Indian culture in these pageants. It really gave me a lot of strength to showcase my culture, and that to me is empowering.” Adding to what the pageant has done for her in general, she says, “The very reason I decided to take part in beauty pageants was mainly to build my self-esteem and explore the best qualities in myself—which come through during the training process of the pageants.” 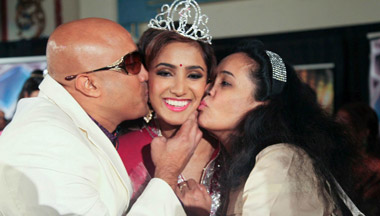 Pran feels that the purpose behind a pageant is to justify the quote, “beauty with brains.” On this note, she is happy that the Miss World pageant recently announced it will eliminate the swimwear round. “I feel that these days internal beauty is being neglected and while it’s great for women to be confident of their healthy bodies, it’s really crucial to showcase the inner beauty and talents of each contestant, rather than mainly focusing on the external beauty.”

This is also a reason why former Miss Universe Sushmita Sen is one of Pran’s main role models. “When I was watching videos of Miss Universe 1994, I could really relate to Sushmita as she was walking with such grace and elegance during every round. The more I watched her, the more I was able to realize that participating in any beauty pageant is really about presenting internal beauty and talent in a unique way.” 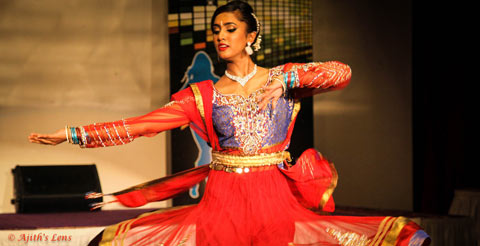 (Left) For her talent round, Pranathy made a bold choice: a fusion of Kathak dance to “Mere Dholna,” a popular film song which has classical beats based on Bharatanatyam and Kuchipudi forms. (Photo: Ajith Lens)

So what was Pran’s talent that was showcased? A Kathak dance to the popular film song “Mere Dholna.” “During the five years I was training in Kathak, my dance teacher choreographed “Mere Dholna” in Kathak form. The classical beats of this song are based on Bharatanatyam and Kuchipudi dance, and to incorporate Kathak elements made the dance quite unique. It showcased my joy as a classical dancer, and really boosted my confidence while I was performing it on the main stage at the Royal Albert Palace in New Jersey.” Like most contestants, for Pran, deciding which dance to perform for a national pageant was tough. She thanks her mother for encouraging her to take the risk on her bold selection.

There are legions of jokes about the kind of questions asked in beauty pageants, and worse, about the answers given by actual contestants. And yet no other round of the pageant is perhaps as significant as the question round. With her emphasis on beauty with brains, it was also personally important to Pran that she do well in this round. She was asked, “If you were to have a famous person as a dinner guest, who would you choose and why?” Her answer, which came without skipping a beat: Malala Yousafzai. Part of her answer included, “Since this has been a year where women have gotten the opportunity to speak up about their opinions, I believe Malala has really been the leader in helping women having their own voice. And I would love to get tips and learn how to be brave and courageous from her as well.”

No sooner had the answer flowed from her, she had a gut feeling she had a good chance at winning. “…[F]or the first time I finally managed to confidently answer my Q&A. That moment was one of the best moments ever in my life,” says a jubilant Pran.

So what’s next for Pran after moments of such highs? As one with a diverse set of interests and hobbies— traveling, learning different languages, dancing, singing, reading, and swimming—she has enough to keep her engaged. Like other young pageant participants, she displays a healthy idealism when she shares earnestly, “As pageant winners we are also role models, and as a role model I want to help the Indian community by spreading awareness of major issues such as crimes against women, domestic violence, and children with special needs.” She notes that Miss America Nina Davuluri made a huge impact on the Indian community. “I look up to her not only for her gorgeous personality, but also for embracing her natural Indian beauty.” 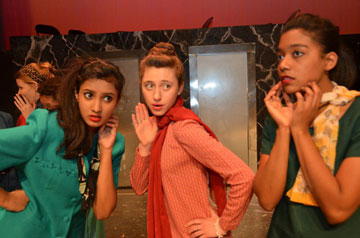 Doing what she loves: acting, with fellow students at the Lee Strasberg Theatre & Film Institute in West Hollywood, near Los Angeles.

As to acting? Well, that is more than a passing interest or hobby to Pran. Of the many goals she says she wants to accomplish, acting in films is a major one. She is currently majoring in film acting and production at The Lee Strasberg Theatre & Film Institute in Los Angeles. With role models such as Audrey Hepburn and Meryl Streep, she says she really would like to “dig into the craft.”

Bollywood and other regional Indian film industries are known to court Miss India title winners from all over the diaspora. If such an interest came her way, would she go for it? “Yes!” she says, while adding the following qualification to it: “Before taking up a project, it’s really important for me to know what my importance in the film is, and could it really bring out my potential as a newcomer. Often, women entering into this profession are mainly about glamour, but really it’s about being able to have the capability of doing any role that you have been chosen to portray. If there were a script that captures my attention, I would definitely take it up.”

Who knows, it may just be a matter of time until you see Pranathy Gangaraju in a “theater near you”! Thanks to her pretty eyes, congeniality, striking looks, talents, and brains, it may not be a far stretch.

Archith Seshadri is an anchor/reporter for the Fox affiliate in Charlotte, NC, and president of Asian American Journalists Association (Atlanta). He shuttles between Charlotte, NC and Atlanta, his hometown.