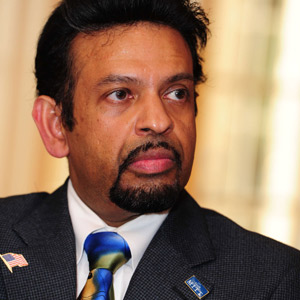 The incoming president of Georgia Association of Physicians of Indian Heritage (GAPI) is a relentlessly motivated overachiever. But it is the “giving back” instilled into him from childhood that is even more inspiring.

If you don’t find Dr. Indran Indrakrishnan treating a patient at his gastroenterology practice in Lawrenceville, Georgia, or teaching students at the Emory University School of Medicine, or preparing for his role as the newly elected head of the Georgia Association of Physicians of Indian Heritage, you’ll probably find him feeding the hungry at the Grace Chapel Church in Cummings.

A small testament to his zeal for life are the many firsts he stakes a claim to, one of them being the first Indian-American president of the Georgia Gastroenterological and Endoscopy Society in 2004. Not surprisingly, Dr. Indrakrishnan was described as “something of a celebrity among South Asian immigrants” by the Pulitzer-Prize-winning writer Natalie Angier, in a 2013 feature titled “The Changing American Family” published in The New York Times.

It was his parents who saw the potential in him and pushed him to do better, and eventually put him on a path that led to medical education in Colombo, post-graduate medical studies in London and in the United States, and finally a successful career as a gastroenterologist.

It was also his parents who nurtured the belief in him that “he was raised to help people.” As the youngest of four children in a fairly well-to-do family, he grew up in a home that was “always open to people looking for some kind of help.” Dr. Indrakrishnan recalls, “During Diwali and Pongal celebrations my father made sure we went to the temple to feed the poor and give clothes and other things to school children rather than just celebrate the festival at home amongst ourselves.”

This motivated doer believes that the call to give back to the community was always there at the back of his mind. And when the opportunity came many years later, after he had established himself in his career, he seized it with both hands. Despite the numerous professional engagements that keep him busy, he makes time for nonprofit work. He is passionate about increasing awareness about colorectal cancer, and a major part of his nonprofit work is in this area. He is on the board of directors of Fight Colorectal Cancer, which is involved with patient advocacy and enabling policy decisions, and has for the past five years involved himself with campaigning for increased colorectal cancer screenings. “March is designated as Colorectal Cancer Awareness Month, but since this wasn’t being observed in Georgia, I wrote to Governor Nathan Deal requesting him to issue a proclamation. Within days I received a favorable response from him with a certified proclamation making March the Colorectal Cancer Awareness Month in Georgia. We also regularly meet with legislators here and in D.C. on issues dealing with insurance coverage for colorectal cancer screenings.” 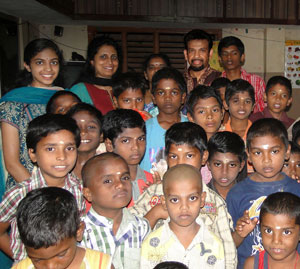 The Indrakrishnan family with the children of the Mahalakshmi Foundation, an orphanage in Chennai for which they helped raise funds.

As a consultant for Third-Eye Dancers, a Georgia nonprofit working for underprivileged children in Georgia and India, he is involved in fundraising. “We’ve had a few fundraisers in the last couple years, including one for Nepalese refugee children, and another for a Chennai foundation that helps abandoned children. The actual fundraising is done by kids and teenagers who dance and raise money.” 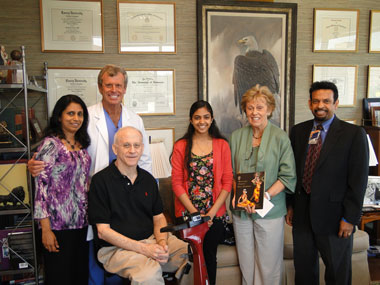 Keeping up the legacy: daughter Harini requested guests at her arrangetram to donate to the Shepherd Center in lieu of flowers or gifts. The amount donated as a result was over $10,000. The family is seen here with founders Mr. and Mrs. Shepherd and the medical director Donald Peck Leslie, MD.

Although Dr. Indrakrishnan and his wife Gayathri are practicing Hindus and on the board of trustees of the Hindu Temple of Atlanta, his religious denomination has never restricted him from getting involved in philanthropic initiatives tied to other faiths. Besides the Hindu Temple, he is also found at the Buddhist temple in Lithonia, or cooking hot food for hungry families sponsored by the Grace Chapel Church in Cummings, Georgia. It was his daughter, Harini, who drew him into the church’s Meals by Grace program. The church gathers information about hungry children from counselors in various school districts, and works to feed them. “Every Sunday many families, including teenagers, go to these areas and cook for them. My daughter was volunteering there, and I joined, too. They had some space issues, so we opened up a portion of our strip mall for them to expand their charitable activities.” Seeing Dr. Indrakrishnan’s hours of dedication to their cause, the Church invited him to their board of directors this year.

“My personal belief is that religion is there to guide us in the right direction, not to make us fight each other. That is why I respect all religions,” he says.

Dr. Indrakrishnan’s focus towards communitybased work will also impact the working of GAPI, the Georgia Association of Physicians of Indian Heritage, when he takes over as president in April this year. “My goal is to direct GAPI towards community service rather than just social networking. It was formed 25 years ago, mainly for networking and some education. But lately we are trying to use our expertise and resources to serve our communities.” He added that he would like GAPI to be involved beyond healthcare and into socially conscious charitable activities affecting the broader Georgian communities.

Admittedly, Dr. Indrakrishnan’s exceptionally busy life calls for exceptional time management skills, and he credits his wife with his success in carrying it all off—his work as a physician, his passionate espousal of nonprofit work, and even dabbling in business ventures—with aplomb. “Gayathri is an MBA and a CPA. She advises me, and handles everything for me. Her expertise is phenomenal.” Like Dr. Indrakrishnan, Gayathri grew up in Sri Lanka, too, but they met for the first time in Toronto, before they got married. Gayathri, who plays the veena, and Harini, a senior at Woodward Academy and a violinist and a Bharatanatyam dancer, have also made the doctor something of a champion of the arts. 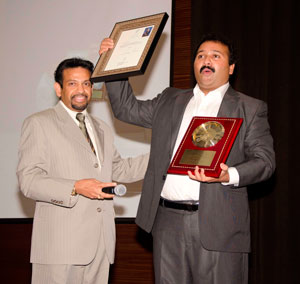 Would politics be a natural next step for someone of his enormous drive? Dr. Indrakrishnan does not think so. “That does not mean I don’t contribute to the political system here. Let me give you an example. It’s a standard for insurance to cover colon cancer screenings after the age of 50. But in the last six to seven years studies have shown that African-Americans tend to get colon cancer much sooner than age 50. However, insurance companies seem to disregard this. When African-American patients want to be screened earlier they find that they have to wait until they turn 50. I’m talking to legislators to see if they can bring a rule at least in Georgia to enable African-American patients to be screened earlier, and also at a national level through our organization, Fight Colorectal Cancer.”

Is it likely that Dr. Indrakrishnan’s multifaceted life will take on more facets? He ponders the question for a moment before replying, “I don’t think I have a next step in mind. I’d like to continue doing the work I’ve been doing… I hope I have the opportunity to keep on serving the community unless God has planned something else for me that I don’t know.”

What we do know is that the distant voice of his parents that told him that he was “raised to help people” continues to be a driving force for the earnest Dr. Indrakrishnan.