Stories of a Lifetime 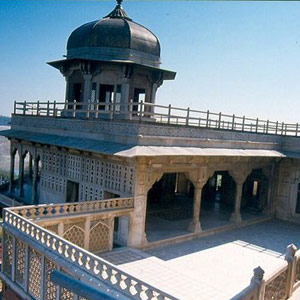 (Left) A view of the Taj Mahal from the fort where Shah Jahan was imprisoned by his son Aurangzeb. The author’s beloved grandfather loved to share stories about the Mughals.

Reflections on a unique oral storytelling bond between a little girl and her grandfather.

The doorbell rang exactly at 4 p.m. Immediately, my ayah, Sita didi, ran to hide under the big teakwood dining table, while I jumped with joy. You could count on my grandfather to elicit such extreme responses to his presence. He stood behind the bars of a closed Bombay apartment door. “Pappa, Pappa,” I screamed with joy as he bent down to give me a big kiss. “What did you bring today?” I asked. He held out a snack of some sort, wrapped in old newspapers with promising pictures of Bollywood stars, a meager thread holding it all together, barely. One for me and another for himself.

“Pappa” was a retired district judge. After having lived in huge government bungalows all his life, he was now reduced to long days of boredom in a small apartment. When the position of  legal consultant for Mahindra and Mahindra Company was offered to him, he jumped at the prospect and took this opportunity as a way to reinvent himself. He worked a convenient half day and came home to be with me every afternoon.
I grabbed my snack of samosa, bhel puri, or medu vadas and reminded my grandmother that it was time to make the tea. As she hurried to start the chai, I hopped onto my grandfather’s hospital bed.

Pappa had acquired a hospital bed when he had broken his hip some years ago. The hip was good as new in no time but Pappa decided that the comforts of the hospital bed were too good to let go. My mother always cringed at the sight of an ugly hospital bed in the middle of the bedroom, but as a child of about six, I loved it. It moved back and forth and was wide enough for books, food and even a herd of imaginary sheep that aided quick sleep for Pappa and me. It was a dream bed!

All day at school I waited for this moment, to hop into his “throne” and hear my grandfather tell stories. My friends stopped calling me to play and my grandmother was annoyed that her husband chose to spend all of his afternoons with me instead of her, but Pappa was not one to care. And I loved that about him.

Pappa spent a lot of time alone before I came along. He enjoyed solitude for reflection, reading, and prayer. Another reason for his solitude was that because of the history of his tough exterior and iconoclastic personality he had earned a reputation for being difficult. He hated weddings and funerals, and by the virtue of boycotting these major events within the extended family, he was now removed from most family invitations. That pleased him even more, and further led the family to believe that their initial assumptions were more than correct. He could never be confronted, and if you took up a fight with him, you knew you could never win. While an adult moved on pins and needles around such a big personality, for a child like me the gift of not knowing helped me shape my own views. Besides I was not consciously looking to make judgments.

Because both my parents worked full time, Pappa was my best friend. He absolutely adored me. And my adoration started with his stories. When I hopped into that bed, I knew I would be taken into a new world. His stories were not fairy tales or animal stories. They were stories from his life and an amalgamation of every-thing he knew or cared about. He was the only person who did not come down to my level of being a child. He did not make silly faces or imitate animal sounds or talk to me about fairy land and magic spells. And thank God for that, because I had already had enough of animal stories by the time I was six! He talked to me like an adult. His expectation for me, to rise up to his level, not just suited my interests but also challenged my mind. I still don’t know whether he did that because he knew me too well to know what I would respond to, or if it was just who he was.

My grandfather moved to Bombay after Partition. Like many other refugees, he created a new life in India; like many members of a displaced community the grief and trauma associated with that massive loss was buried deep within him. I never heard my grandparents or any members of my family talk about Sindh. Except during my story time. Like rare relics, stories of Sindh started to surface during our time together. With just my little ears and anticipatory eyes, somehow Pappa felt safe to talk about his childhood and life before Partition. His storytelling was charming and compelling, his choice of words erudite, with no simplification whatsoever. The language was smooth as silk, I can still feel the tangible texture of his words. He painted pictures with his words of large fields, old havelis, the wide and clean streets of Karachi, the comfort of verandahs. His father had owned 600 acres of land and they were a family of landlords. He grew up with animals, fresh milk from cows, and freshly churned butter. His life was different from mine, living in a small city apartment as an only child in an independent country. While I loved going into his dreamy childhood land, the contrast of that setting with my own inculcated in me a sharp sense of comparison and attunement to environment. It taught me at an early age how one’s upbringing is not only crucial to one’s life but that it stays with us forever.

His personal storytelling was in no way a drab narration of life’s linear events. His recollections of incidents, whether they were funny or tragic, were not only entertaining but involved all the elements of a good plot. If Partition had not happened, he would never have held a job. He would never have become a judge perhaps, never met my grandmother and I would never be here.

Pappa was a man of varied interests, but his first love was history. I always wondered if this interest was sparked by the fact that history helped shape his own life and future to an irrevocable degree. Some of his favorite historical stories came from the Mughal court. It started with Akbar-Birbal stories until I realized that he knew way more about Mughal history than any children’s books could contain. In fact, Pappa was the one to tell me the lesser known fact that Emperor Akbar was born in Sindh! He got me to memorize the Mughal rulers in linear order. Every now and then he would test me by asking me to narrate them and there was no room for mistakes. He was the first one to expose me to the great works like Baburnama and Akbarnama. Through those stories I learnt the human elements of rulership, kingdoms, and countries. The complexities of these great rulers and their time inspires me still, to understand human nature and the functioning of governments. Through our narratives of the Mughals, it was Shah Jahan who always stood out. I would beg Pappa to retell the story of the Taj Mahal. His tough exterior would melt and with an otherwise unseen gentleness he would tell the tale of romance and tragedy. Pappa believed like many that Shah Jahan was planning the construction and had laid the ground for a Black Taj, right across the river, which would be his own tomb shrine. However, due to being captured and imprisoned by his son Aurangzeb, he was unable to complete it. The only thing he asked was for his captive cell to be in a place where he could see the Taj. I was overwhelmed with emotions of love, awe, admiration, and hatred. “How could Aurangzeb do that, Pappa?”

“Humans can do anything, never be surprised, my dear,” he replied. A part of me would have wanted him to hide this harsh truth from me, but another part of me was happy to be told the secrets of human life that my friends would perhaps not learn until much later. “I hate him, Pappa,” I said.

“Remorse had stricken his false heart / and quenched his wonted fire / With gloomy brow and look intent / he gazed upon his sire…The awful thought still follows me / that even kings will die,” he quoted from H. C. Dutt’s poem, Aurangzeb at his father’s bier.

Hours passed as if they were minutes in Pappa’s company. We were a world onto ourselves, and we did not need anyone else. He wove webs of reality, borrowing from everyday life. He did not need to dabble in fantasy because his stories proved that reality can be stranger than fiction. I knew Pappa for all of eleven years and yet today, just like his own stories came from the depths of his subconscious, in my writing process, every now and then, I hear his voice as a master storyteller, inspiring me to tell stories. Perhaps one day they will be as good as his.

Preeti Hay has a Master’s degree in English Literature and a Bachelor’s degree in Mass Media. Her articles have appeared in publications including The Times of India, India Currents, Yoga International, Yogi Times, and anthologies of fiction and poetry.