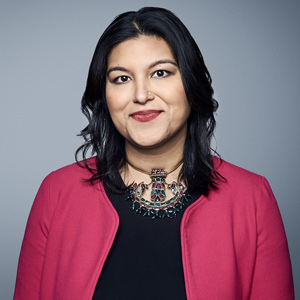 S. Mitra Kalita, the Senior Vice President for news, opinion, and programming for CNN Digital, is the author of Sub​urban Sahibs, a groundbreaking book that delved into how immigration altered the American suburbs. She was an editor and columnist at India-based Mint, and has also had an illustrious career in the U.S. at The Washington Post, Newsday, The Wall Street Journal, AP, and The Los Angeles Times. Her economic memoir and study of globalization is called My Two Indias.

You were raised in Long Island, New Jersey, and Puerto Rico. Tell me about that and what drew you to journalism?
My parents moved around a lot when I was a kid. In hindsight it has a lot to do with why I became a journalist. Most of your readers will be familiar with kind of the duality that it is to be Indian-American. A few things challenged that traditional narrative. My father is culturally quite eclectic. He's a Buddhist, had Kiss records, and listened to Janis Joplin. Growing up, we had a lot of African-American literature in the house. There was an early exposure to not your typical white, suburban American existence, if you will.

We moved to Puerto Rico when I was eight years old and so began the end of any duality that I had in my life. There was a familiarity and closeness with people who weren't family that we really hadn't experienced in America. I started to see culture from a point of finding similarity as opposed to difference. That's completely how I approached digital journalism—that in order to find readers, you must have this belief in finding something in common with them.

Did you have any early struggles in journalism?
I was afraid to articulate story ideas, and very quickly I learned that in a newsroom, if you don't have your own ideas, you have to execute things that your editor thinks are good ideas and probably aren't. My first job was with the Associated Press, which was just a great training ground, but also a great lesson in learning the formula in order to break the formula.

Can you give me an example of how that method played out for you?
Here at CNN, I oversee the opinion team, and we're constantly trying to figure out whose perspective we are not hearing in the story. I talk a lot about how we can get under that reaction that's prompting virality.

What does it take to hold your own despite the growing chorus of “fake news” and of media being treated as “enemy number one”? Is that a particular challenge or do you feel like that's a fight that you have been waging for a while?
I've talked a lot about the importance of reader trust, and I've often done it from a perspective of diversity and inclusion, which I don't just mean to be about race, but really in seeking out voices that are different from the ones you keep hearing. Why do people trust questionable news on Facebook if it comes from their uncle? Well, the answer is because it comes from their uncle. How can we build that same trust and familiarity with our audiences? How do we engage in a conversation with our users? Being inclusive as far as who's writing the news, who's editing the news, who's making the decisions, is something that we have to ask ourselves every day.

I’m not gonna lie—obviously the current climate of how journalists are perceived and treated is a really challenging one. What I try to tell our teams is that if you take something that the President has tweeted and start to regard as adversarial, then that's not the right approach—because our entire being rests upon sticking up for our audiences. It's about our role in a democracy. It's not about a combative relationship with a politician.

What advice would you give to a young Indian-American kid who wants to be like you?
I still have this belief in work ethic. I still have this belief in trying to be the best that you can be. I'm from a region in India that's considered one of the most backward states in the country. And my Dad always says to me, “If this is as good as it's going to get for you, that someone like me made someone like you who made it to somewhere like here is pretty remarkable.” Right? I think that's a pretty useful perspective as well. Just to think that my grandparents ever would have someone like me able to talk to you in this office filled with Bollywood posters. That's a real privilege.

You mentioned Bollywood posters in your office—which one’s your favorite?
Well, the ones I have are not necessarily my favorite. One of them is from Mother India, which if you're familiar with it, is a woman who feels like the whole weight of the world is on her shoulders, but you can tell that she still has a lot of fight in her and could take you down. I felt like that’s kind of a message to anyone who comes through.

Poornima Apte is a Boston-area freelance writer and editor. Learn more at WordCumulus.com.