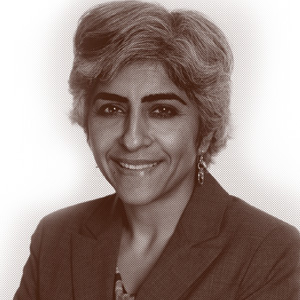 Kiran Ahuja’s outlook on race was molded in Savannah, Georgia, where she grew up. She attended law school in Atlanta and went on to spearhead the White House’s AAPI (Asian Americans and Pacific Islanders) Initiative. Now Ahuja is the chief of staff at the Office of Personnel Management, which provides human resources and support to federal agencies.

How did your childhood in Georgia shape the person you are today?
My parents immigrated in the early ’70s. My dad was a psychiatrist. We lived in a lot of different small towns in the South and then ended up in Savannah in my elementary school years.

When you're a kid all you care about is trying to fit in and it was, at the time, somewhat challenging, because there were few Indian families. Then, of course, the Indian families that were in the schools, everyone else thought you were related to each other. Just experiencing firsthand the dynamics of race in the South had a profound impact on me.

Many children of immigrants could probably say that. What is it about the South in particular that resonated with you?
It was a very different experience from some of these major cities that are big draws for immigrants, like New York City or San Francisco, where you're jumping into a melting pot.

Also, when I was in Savannah, it was still under a desegregation order. The year I graduated from high school was when they came out from under the desegregation order, so I was bused downtown, and then kids were bused to my school throughout that time. You had diverse schools but you were also dealing with these dynamics of living in very different parts of the city. I saw it play out, where each race or community would stay in their comfort zone. Not that you didn't see the cross-pollination, but I learned very early on how to navigate both, and what that meant.

Is that what steered you towards law? I am assuming it was a gradual evolution, but what shaped that decision for you?
I did not like science and math. I was a political science major in college. I was taught very early on about what it meant to be engaged as a full citizen and to care about those who are less fortunate. Law, in the sense of doing public interest law, was definitely something that I gravitated toward.

How did you get to where you are now?
After law school, I had a really fortunate experience to get the job I wanted, which was the Department of Justice Honors Program. They bring in attorneys directly from law school, or federal clerkships. I got this job inside the civil rights division working on desegregation orders.

You came full circle then...
Absolutely. And then here in D.C., I started to get much more involved in the Asian- American community. I did civil rights litigation for a few years, and then became the first executive director of this small Asian-American nonprofit that was focused on women's issues. That also helped significantly, because I built relationships with a whole host of Asian-American women who were very engaged in their communities, and cared about a range of issues, from health, domestic violence, trafficking, immigration.

With Asian-Americans, it's such a huge umbrella. How do you unite everybody under that umbrella, when at the same time, everybody's concerns are really different?
There are two significant challenges. There is the Asian-American community, which in and of itself is very diverse, and it is very much a political, social construct. There is the Asia Pacific side, based on regions. If we were to separate into individual communities like Filipino or Korean or Japanese, the size would be really small, so if we want to have any influence around issues, it was important for the community to work together. During my time at the White House initiative, I always made a point of making sure that we not only did work that cut across all these different communities, but we focused on specific issues that really affected niche segments.

What does your work involve now?
After serving as executive director of the White House AAPI initiative for six years, I wanted to gain a broader experience in federal government. You could have the best mission-focused job in the world but if you hated your boss, if you couldn't stand the culture, it doesn't matter. We're setting the stage so that agencies have the right people to fulfill their mission.

Now of course, it's not the same landscape anymore, but what advice would you give to kids who are looking to follow your path?
You are seeing a lot more South Asians coming into public service. This helps because young Indian-Americans are maybe pushing their parents a bit to say, ‘I want to have alternative careers.’ There is value in serving in government, and for young people at the beginning of their career, it really should be guided more by what’s your passion, not what’s your job salary.