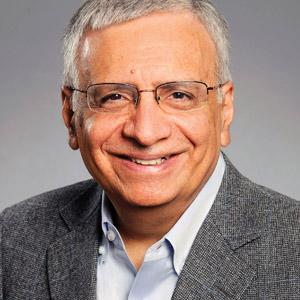 Dr. Rafi Ahmed, a world-famous immunologist and a member of the National Academy of Sciences, is Director of the Emory Vaccine Center in Atlanta. Given his accomplishments—he is working on immunotherapy treatments for cancer and a universal flu vaccine—it’s hard to believe that he chose his vocation without making an informed decision.

Your first stop in the United States was in Idaho. What was that experience like?
It was 1970. I was coming from Hyderabad and I did not know the difference between Idaho and Iowa. It was one of those situations where I applied, and I got in, and it was very affordable. It’s been a wonderful journey, and those four years were very helpful. I ended up getting an undergraduate degree in Microbiology. I had a wonderful host family that I am still in touch with and visit now and then.

Why pick microbiology?
In India if you’re doing science, you either took math-physics-chemistry combination or you could do botany-zoologychemistry. It wasn’t much of an option. I wasn't particularly good in mathematics, so I chose the biological sciences. I found botany and zoology to be very boring. But then there was a little bit about microbiology that we learned about microbes, and I thought that was interesting. I said, “Well, okay, let’s do microbiology.” It really wasn’t a very informed decision. (Laughs)

How did you get into vaccines from then on?
A big turning point for me really was working for a very famous biologist at McGill University in 1974, Angus Graham. He offered me a position to work as a technician or a research assistant in his lab. He gave me a very strong letter of recommendation for Harvard, so I ended up going for my Ph.D. at Harvard. I was only in Montreal for two years, but those two years really pointed me in the right direction.

I went on for a postdoc at Scripps Research Center to really learn more about in vivo pathogenesis, immunoresponses, and it was a wonderful experience for three years. And then I was recruited to UCLA to start my own lab. So my training was as a virologist looking at viral infections and studying viruses. My postdoctorate training was looking at how viruses interact with the immune system. Starting from 1984 on, my goal really became understanding immunological memory. That, of course, is the goal of all vaccines. Then I was recruited in 1995 to head the Emory Vaccine Center.

Speaking to the broader question of vaccines in general, why do you think there’s an increasing distrust of vaccines?
We have two challenges. One is to make vaccines where vaccines don’t exist, but also educate the people to take the damn things. People who become part of the antivaccine lobby, it’s not that they're bad. I think there’s a lot of misinformation.

You’re seeing more of it recently in the press because after Trump won the election, Robert Kennedy, Jr. was asked to evaluate vaccines. That raised an alarm because this is not a person who's a scientist and certainly has been very antivaccine, so people were concerned. I think everyone would be in favor of there being a more in-depth analysis of this, and there needs to be more education of the public. But it should really be led by an impartial group of people and not by somebody who is not a physician or a scientist.

It’s not that the antivaccine lobby is against vaccines or against scientists; they’re very often against Big Pharma. The reality is that Big Pharma actually makes very little money on vaccines. They’re lucky if they break even.

Where else has your work taken you?
I feel very strongly about "giving back to your country," so we have a lot of collaboration in India. The Emory Vaccine Center has a lab in New Delhi working on dengue infections. As you know, dengue is a big problem in India. We also work very closely with people in Vellore at the Christian Medical College. I spend a lot of time and effort interacting with scientists in India—that’s also been very satisfying.

Do you travel there often?
I go at least two or three times a year.

Do you still play cricket as you used to in India?
I follow along but haven’t played after coming here. In LA there was an active cricket league and I used to go watch once in a while, but I don’t have a full day anymore to play cricket. (Laughs).

The Distinguished Faculty Lecture recognizes excellence among university faculty. A Faculty Council committee provides a nomination to the university president and provost for approval. In keeping with Emory's commitment to broadening knowledge within the university and wider Atlanta communities, the selected faculty member delivers a public lecture in the spring of each academic year.

Dr. Rafi Ahmed is the Georgia Research Alliance Professor of Microbiology and Immunology, and Director of the Emory Vaccine Center at Emory University School of Medicine in Atlanta, GA. He earned his undergraduate degree from Osmania University, India and his Ph.D. from Harvard University in Cambridge, Massachusetts. After completing his postdoctoral training in the Department of Immunology at Scripps Clinic and Research Foundation in La Jolla, CA, he joined the Department of Microbiology and Immunology at the UCLA School of Medicine. He was at UCLA from 1984-1995 and moved to Emory University in 1995. His research efforts are directed towards: 1. Understanding the mechanisms of immunological memory and using this knowledge to develop new and more effective vaccines. 2. Defining the mechanisms of T cell exhaustion during chronic viral infections and cancer and developing strategies for restoring function in exhausted T cells. Dr. Ahmed is a member of the National Academy! of Sciences and the National Academy of Medicine.

The Distinguished Faculty Lecture recognizes excellence among university faculty. A Faculty Council committee provides a nomination to the university president and provost for approval. In keeping with Emory's commitment to broadening knowledge within the university and wider Atlanta communities, the selected faculty member delivers a public lecture in the spring of each academic year.