The NRI: PAN and AADHAAR Cards: From Confusion to Clarity 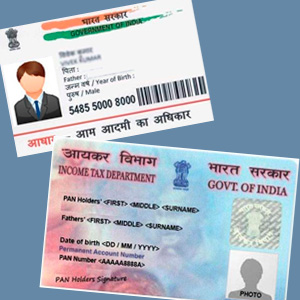 If you are a Non-Resident Indian (NRI), sooner or later you may need one or both of these government issued ID cards. Even for American citizens of Indian descent who officially transact in India, these may be needed or useful.

Lately NRIs who are concerned with making investments, selling properties, filing income tax returns, as well as opening and managing bank accounts in India have experienced a fair share of confusion and jitteriness surrounding a spat of notifications and circulars surrounding the PAN and Aadhaar Cards. On November 15, 2017, Unique Identification Authority of India (UIDAI) issued a circular clarifying the requirement of Aadhaar Card for Non-Resident Indians (NRIs), Person of Indian Origins (PIOs), and Overseas Citizens of India (OCIs).

Here’s a concise breakdown of if, when, and who, in context of U.S. residents, need either of those cards.

Requirement of PAN and/or Aadhaar for U.S. residents:

PAN card is required only if a person has any taxable income in India, whether the person is a resident of India or a non-resident of India. There is no requirement or exception about residential status or citizenship.

Aadhaar is the Indian version of America’s Social Security Number (SSN) but contains a photograph and can also serve as an address proof. However, only a person who has been residing in India for a period of 182 days or more in the last 12 months immediately preceding the date of application is eligible for the Aadhaar Card.

As physical presence in India is a requirement, anyone, whether an NRI (Indian citizen) or a PIO/OCI (U.S. or foreign citizen with Indian origin), who is not living in India is not eligible to apply for an Aadhaar card.

The following table summarizes requirement of PAN and Aadhaar for US residents:

Conclusion:
• Only persons living in India for more than 6 months in a 12 month period are allowed to have an Aadhaar card. Mandatory requirement of linking of Aadhaar number with various accounts, investments, or services would not apply to anyone living outside India.

• Any person living outside India, having an account, investment, or transaction as an Indian resident, would need to update his/her status with the respective organization(s) from resident to nonresident. Otherwise, the account/investment may be frozen.

• Any person who is residing abroad and having an Aadhaar card (while on a brief visit to India) would be considered as having obtained the Aadhaar card in contravention of the Aadhaar Act.

Jigar Patel, CFA (USA), MBA-Finance (USA), CA (India), specializes in NRI investments, taxation, and wealth management to serve clients from across the globe. He is an author of the book NRI Investments and Taxation: A Small Guide to Big Gains, and his NRI advisory has received the Customer Centric Business of the Year award in India by Intuit and Bloomberg TV India. He can be reached at jigar@nareshco.com.

Disclaimer: This information has been prepared solely for general information purposes and is not intended to constitute a recommendation, offer, or advice.