Americana: The Rise and Fall of the Catholic Church 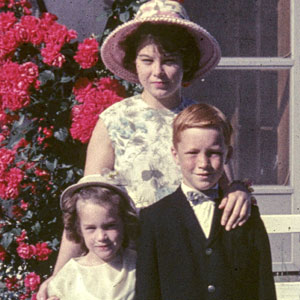 (Left) The author as a young boy in 1965, with his sister and mother, ready for church—which was every Sunday, without exceptions! Now, writes the author, the Catholic Church risks making itself a relic, due to its institutional arrogance.

On a late spring afternoon, Mom and I entered Sacred Heart Catholic Church in Pinehurst, North Carolina. Two days before, Dad had died from a massive stroke and now it was time to make his funeral arrangements. It would be nice if the priest would use the Irish Blessing during the Mass, I mentioned to Mom, and she immediately agreed. Our family had few rituals, but Dad reciting the verses before our family’s holiday dinners was one. I mentioned the possibility to the funeral coordinator.

“Oh, do you mean this version of the Irish Blessing?” she asked. As if auditioning for the lead role in a Broadway play, she then sang every last verse.

Is she looking for applause?

“Huh? What can’t be done? You know it, you sang it, and you told me it has been used in this church during regular Mass.”

“Father will not recite the Irish Blessing.”

“Father will not recite the Irish Blessing.”

A few minutes before the funeral, I approached the priest and told him how much it would mean to my mom if he would say the prayer.

We stared at each other.

Dad, is that you?

Oh, sorry, yes, of course it is. Yes, I want to give him hell, but this is not the time or place. Today needs to be about Mom. She doesn’t need her son to throw an Irish fit, even though I want to.

“Billy, why won’t the priest recite the Irish blessing? Did you explain how important it is to our family?”

A few weeks later I wrote a letter to the bishop. Really, your priest can’t comfort an aging widow and her family by reciting the Irish Blessing? A month or so passed before I received a pompous and dismissive response. It is what I expected.

But hey, my experiences with the church of my youth are merely frustrating, nothing like the lifetime of pain and suffering that sexual predators masquerading as priests have inflicted on the innocent, nothing like the shame that those Catholic bishops should feel who “took care of their own” by transferring the leeches to a new and unsuspecting colony, or the reflection that the current pope should feel when he re-reads his lukewarm words to the scandal that has damaged so many.

My words are not as harsh as those of others, including Paul Elie, a writer who lectures at Georgetown University’s Berkley Center:

“It affects me profoundly,” he said of the recent scandals. “A lot of Catholics, we have to ask whether we have wasted our lives following this model of leadership. At this point, the leadership in this country is not credible.”

Sex scandals are not the problem; they are a symptom of the problem. The Catholic Church has a severe case of institutional arrogance, at least some of those in charge don’t know it, and they have had the disease since birth.

Jesus had died and a handful of his disciples feared for their lives. Both the Jews and Romans had motivations for finding and arresting those who were close to their Lord. In a small room they gathered, unsure of what to do next, and then, it happened. Lord, is that you! My Lord and my God, it is you! Jesus has defeated death!

The resurrection of Jesus Christ would mark the birth of a new religion, if the disciples could spread the “good news” into one very hostile world. The Jews would want nothing to do with a competing religion. The Romans wanted order and already had an impressive collection of “pagan” gods.

Some of the first disciples would be martyred. Some would be tossed in jail. Some, like Thomas, who is thought to have traveled to India, would evangelize in distant lands.

But what, exactly, would be their message? Any start up organization—business or religion—needs a single message, and so it was with the fledgling church.

In its early years, this new religious movement had lacked structure and codified beliefs. Gospels recounting the life of Jesus Christ were plentiful, and sometimes contradictory. Anyone who felt called could teach and lead worship, including women.

In the absence of structure and consolidated power, the movement might not have survived. The story of the first two hundred years of the church is how men created an organization, and codified Christian beliefs. In the process, they reduced, if not eliminated, any competing views of Christ and his teachings. Consider the story of one of the few women whose story is in the Bible, the adulteress and repentant prostitute, Mary Magdalene. But is this characterization true? Karen L. King of Harvard notes:

Discoveries…have now proven that this portrait of Mary is entirely inaccurate. She was indeed an influential figure, but as a prominent disciple and leader of one wing of the early Christian movement that promoted women's leadership.

By A. D. 200, the situation had changed. Christianity had become an institution headed by a three-rank hierarchy of bishops, priests, and deacons, who understood themselves to be the guardians of the only "true faith."… Deploring the diversity of the earlier movement, Bishop Irenaeus and his followers insisted that there could be only one church, and outside of that church, he declared, "there is no salvation."… Whoever challenged that consensus, arguing instead for other forms of Christian teaching, was declared to be a heretic, and expelled.

It is probable that only a small percentage of Catholics who attend church have knowledge of the church’s early formation. What is more widely known is that clergy were allowed (though not encouraged) to marry into the second millennial, an option that was revoked in 1139. Best known is the story of the first challenge to the Catholic Church.

“This is wrong,” Martin Luther argued in 1517, referring to priestly practice of selling indulgences, that is, documents prepared by the church and bought by individuals, either for themselves or on behalf of the dead that would release them from punishment due to their sins. The challenge to the practice morphed into a greater movement, and the Protestant Reformation began.

None of these inconvenient histories were taught to me during my years of attending Catholic school or church, though there were clues to the dubious past, such as the one that required women to cover their heads while attending Mass.

“You look very nice,” I would tell any one of my sisters, who, forgetting their Sunday hat, would be forced into wearing a Kleenex on their heads.

Many Catholics around the world had hopes that the new pope would breathe fresh air into the church, but all he seems to offer is the same tired smoke. Those hoping, say, for a change of doctrine that would allow female priests will not live to see that day, as Pope Francis recently repeated:

She [the church] holds that it is not admissible to ordain women to the priesthood, for very fundamental reasons. These reasons include: the example recorded in the Sacred Scriptures of Christ choosing his Apostles only from among men; the constant practice of the Church, which has imitated Christ in choosing only men; and her living teaching authority which has consistently held that the exclusion of women from the priesthood is in accordance with God's plan for his Church.

In my home-office I have a few items to remind me of my Mom and Dad, such as Mom’s red-tartan knitting container and an old mechanical clock that Dad remembers using as a young boy. One item that is not so quickly found is the bulletin from Dad’s funeral. In the document we are all asked to pray that the Protestants see the errors of their ways and reconcile with the mother church, or words to that effect. Well, no.

Among my memorabilia is a special laminated bookmark that I had made after my Dad’s death. On it is printed the basics of his life along with the words to the Irish Blessing. When friends come to our home for “pizza night,” I share a story or two of Dad’s life, and then, in his honor, recite the familiar verses.

Billy, I still say you should have gone full Irish at my funeral Mass!

Maybe so, Dad, maybe so.