Text and Photos by Reetika Khanna 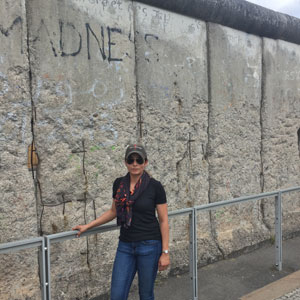 (Left) The author at the Berlin Wall.

“You can go to jail for this crime. I call the police!”

The towering 6ft-few-inches tall ticket collector on the U-Bahn threatened. His strong jawline exuded authority. His dark sunken eyes reflected the devilish satisfaction of wielding power—an invisible Luger pistol leveled at me, as I imagined it. He would have been perfect as a Third Reich Oberleutnant in a WWII Hollywood production.

“But I have a ticket,” I said, defiantly holding up the machine-generated stub as though it were a shield.

“This is a crime. You must pay 60 Euro fine or go to jail,” he declared, reveling in schadenfreude (satisfaction or pleasure felt at someone else’s misfortune).

It was surreal. Was I on some ludicrous reality show? But I soon realized that I could indeed end up in a German jail for breaking the law—an honest mistake of purchasing a train ticket for 3.10 Euros instead of 3.40 Euros.

“This is Germany. We have rules. You have to follow the rules; otherwise, it is a crime, and you go to jail.”

I processed the clear-cut dichotomy of right and wrong with no middle ground. The American in me was ready to take on the system, to challenge the ridiculousness, no matter the risk. I imagined the scene back home. What would my two teenage children think if I called them from a jail in Berlin? What would people say? The Indian in me prevailed.

“Sir,” I continued, albeit in a calmer voice as fellow passengers looked on, some sympathetically, “I don’t think it’s fair to have to pay a 60 Euro fine”—the stipulated fine for traveling without a ticket—“when I have a ticket. I should just have to pay the 30 cent difference. Or a smaller, more reasonable fine since I am a tourist. I have come to visit your beautiful city. I didn’t mean to break the law. Can you let me off with a warning? I will be more careful from now on.”

There. I had ever so smoothly switched gears from combative to conciliatory. As a former Lufthansa flight attendant in her mid-40s, I am proud to report my flight-attendant charm has thus far gotten me out of tight spots. Surely I could get the ticket collector to soften his stance.

I was wrong. The martinet ordered me off the train at the next stop, Alexanderplatz Bahnhof, where two security officers with holstered guns appeared out of thin air. They took my passport details and issued the full fine, instructing me to wire the money when I receive a notice since I didn’t have enough cash, and they didn’t accept credit cards.

Jason Bourne didn’t have to deal with this crap, I thought to myself. I made my way out of the station and into the plaza, ironically, the first scheduled stop on my day trip to Berlin. As a teenager, I read Robert Ludlum’s Bourne Trilogy with frenzied interest. Subsequently, I watched the cinematic renditions of the espionage thrillers with equal zeal.

In the distance, I caught sight of the TV tower—Berlin’s Eiffel Tower, according to some—that I remembered from one of the movies. I walked past a Starbucks (I swore never to step in one of those during my travels abroad) to Café Fellows, a modest establishment with a tempting array of pastries and such. I ordered hot cocoa—the panacea for all things troubling—along with a slice of stollen, famous German fruit bread. I enjoyed the repast and the quiet pleasures of observing the world around me in silence. How very different it is to travel and experience the world as a single woman traveling alone! 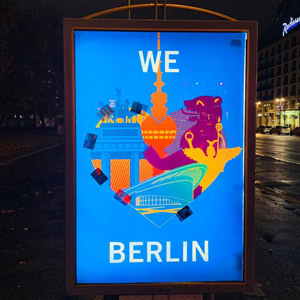 The Original Berlin Walks tour began promptly at 10:30 am outside the busy Hackescher Markt S-Bahn station. The four-hour expedition claimed to cover Berlin’s most significant sights, including a section of the Berlin Wall and the famous Checkpoint Charlie. As we headed toward the first landmark, Museum Island, I reached behind to ensure I had my water bottle in the side pocket of my small backpack. I was glad to be traveling light. With kids in tow, we would have had rucksacks jammed with accouterments that would somehow be classified as essentials.

Along the Spree River, Museum Island, with its five impressive structures built between 1830 and 1930, is home to priceless art and artifacts. The bust of Queen Nefertiti, which I hoped to see later, time permitting, is on display at the Neues Museum that was severely damaged during the war and meticulously reconstructed in neoclassical form.

As we headed south toward Gendarmenmarket (above) to see the Concert Hall and the French and German churches, I got talking to an athletic-framed Australian woman in her 70s. “Oh, I love India,” she exclaimed after correctly guessing my ethnic identity, “What a beautiful country, such wonderful people. But it was sad to see the children on the street.” She paused for a moment and asked with genuine concern bereft of disapproval or judgment, “How can people allow that to happen to children?” 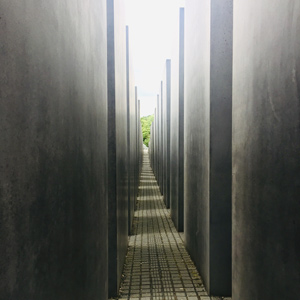 (Left) The Memorial to the Murdered Jews of Europe.

I had no answer. How could people allow this, I thought to myself as we entered the Memorial to the Murdered Jews of Europe. The labyrinth of sarcophagus-like concrete columns is open to individual interpretation. For me, the somber setting invoked introspection. It challenged my numb acceptance of humanitarian crises stoked by perpetrators and peddlers of animosity.

We huddled around the tour guide, heavy-hearted, to learn more about the austere Memorial before heading for Hitler’s Bunker. Fittingly the location was a nondescript spot marked with a placard. Next was Checkpoint Charlie. I was excited at the prospect of hearing the story of a gallant officer named Charlie, whose incredible act of heroism led to the naming of the portal.

“The former military checkpoint was the most famous border crossing of the three border points controlled by the Americans. The other two were Alpha, Bravo,” the guide said, “this was checkpoint ‘c,’ hence Charlie.” I must admit I was a tad disappointed to hear the unremarkable history of the moniker as I watched throngs of tourists take photographs at the tacky replica of the original structure.

Next, we made our way to a see-and-touch, a section of the Berlin Wall at the Topography of Terror. From 1961-1989, the concrete barricade stood as one of the most compelling symbols of the Cold War. “Would you like me to take your picture?” the Australian woman asked politely. As I stood still and faced the phone camera, I couldn’t bring myself to smile. Could anyone? Like the Holocaust Memorial we had just visited, the Wall is a solemn reminder of our collective dark history. I planned to visit the East Side Gallery later to see the animated murals by artists from across the world spreading the message of bonhomie. 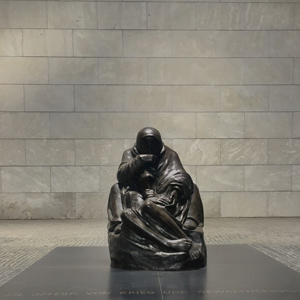 (Left) Statue of a mother and her fallen son at the Neue Wache.

We plodded further, past the Neue Wache, a memorial for those who fell in the Napoleonic Wars and the Wars of Liberation. Perhaps because I am a mother, I was moved to tears at the sight of the statue of a mother holding her dead son set in the center of the spare space. The story of loss articulated in cold stone will forever stay with me. 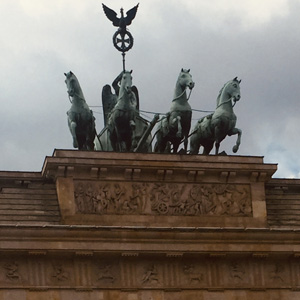 We stopped briefly at the Humboldt University, the historic glass-domed Reichstag, and the former Nazi Air Ministry—a severe-looking building that seemed impervious to destruction. Around 2:30 pm, we reached the grand Brandenburg Gate, a symbol of reunification. The dramatic arch draws its inspiration from the Acropolis in Athens.

“And that folks,” our guide said, pointing to a building across the gate, “is the luxurious Adlon Kempinski Hotel where I hope to stay for a day. Please feel free to leave a tip in the hat, if you wish to help me,” he said with a smile, placing a fedora on the ground.

I made my way to Weidendamm Pier to catch a river tour to get a different view of the city and rest my tired feet. Fortunately, there was a restaurant onboard. Currywurst and schnitzel, followed by a latte macchiato, served like a work of art in a tall clear glass hit the spot. I was ready for more!

I trekked to the East Side Gallery, careful to stay out of the bike lanes. Earlier that morning, before boarding the train, I had accidentally strayed into the path of a woman barreling down on her bicycle. She was dressed in fashionable work clothes and had a toddler strapped in a baby seat behind her. I imagined she was headed to daycare and then some swanky office. Germans, like their many European counterparts, bike and walk everywhere. Daily trips to the grocery store with reusable bags are the norm. Unlike the humongous, stuffed-to-the gills refrigerators in our homes, Germans prefer modest dimensions. And when probed, they will convey their unveiled disdain for Trump’s Hummer-sized ego.

The day came to a close with a stroll through the beautiful Christmas Markets where gluhwein and Feuerzangenbowle kept everyone’s spirits warm. The overprotective desi mother in me was surprised to see little children out and about in the biting cold. Do we coddle our kids in India and the U.S., I wondered? I was pleasantly surprised to find Indian vendors selling ethnic handicrafts amidst stalls proffering traditional German foods and decorations.

Back in Atlanta, a few weeks later, I received a letter from the Deutsch Bahn in the mail. It was in German, of course. I shared it to my flight attendant friend from Frankfurt, a Punjabi married to a German. She translated it for me with ease, and I paid the 60 Euro fine and the $20 wire transfer fee.

When I complained to her about the absurd fine, I assumed that she, too, would be appalled by the injustice. But I was in for a surprise.

“Rules are important, na,” she said in a German accent that seemed to be getting deeper with each passing year she lived there. “Otherwise, Berlin will become Bhatinda.”

Reetika Khanna, an Atlanta-based freelance writer, is the author of Kismetwali and Other Stories, a finalist for the 2016 Townsend Prize for Fiction.