Travel: From Leh to Lamayuru 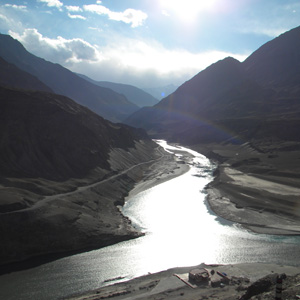 Surreal scenery, like a desolate moonscape, and ancient Buddhist landmarks make this a place like no other.

Here in the valley of the Indus, the sharp peaks of the Ladakh and Zanskar Ranges pierce the sky like jagged swords. The Indus River flows through the high Ladakhi plateau swiftly, sculpting the greater Himalayan landscape.

Fifty million years ago, the Indian plate surged across the Tethys Sea to collide with the stationary Eurasian plate. This dramatic impact resulted in a colossal pileup as sediment from the bottom of the sea was thrown up to form some of the Earth’s highest plateaus and mountain ranges. Today, the high desert landscape of Ladakh looks sepia toned in the unfiltered light of the midmorning sun. Mountains of limestone, red sandstone, and shale dominate the horizon. We follow the Indus River from Leh to Lamayuru in an SUV as it curves along the mountain ridges, the foamy white water rapids catching the sun now and then.

Basgo Village is characterized by a Buddhist monastery (or gompa) that is built into the mountain, sitting precariously at the edge of a high ridge, like a fortress overlooking the fertile valley below. Like the quintessential churches that one finds in English villages, these Himalayan monasteries are the sites for social gatherings and cultural events for the local village folk. 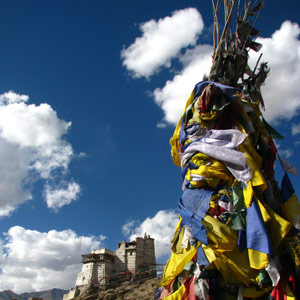 We veer left on a bridge towards Alchi Gompa. Prayer flags—blue, white, red, green, and yellow—line the edge of the bridge, and flutter wildly in the wind while the brimming Indus flows rapidly below. Chortens, the little white mounds that house relics and offerings, sit like meditating Buddhas along the roads and on the mountainsides.

Alchi Gompa is unique in that it is situated downriver; we walk downhill in the shade of the poplars and willows past the stalls selling Tibetan wares, to the crumbling monastic complex or chos-‘khor (dharma chakra). The enclave is attributed to the great Tibetan scholar Rinchen Zangpo, a visionary. When he sought to incorporate Tibetan Buddhism into the local culture around the 11th century, he employed Kashmiri artists in the area to create murals and sculptures to adorn the temples in the chos-‘khor. 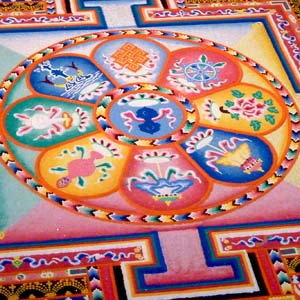 The Alchi Sumsteg is a three-storied building within the enclave with elegant columns and ornate Kashmiri woodwork. We walk through to the main ceremonial hall, the dukhang, where the monks assemble for worship and meals. Colorful mandalas and thangkhas hang down from the ceiling like prayer confetti. It is dark inside the inner sanctum, where the bejeweled miniature idol of Maitreya sits in eternal meditation. The chos-‘khor has a central courtyard with short apricot trees and faded prayer flags in the center and little shrines lining the perimeter.

The temple of Manjushri dedicated to Buddha’s disciple of the same name, has a very small, ornate entryway with a cave-like interior. Once inside, we are awed by four gigantic figures of Manjushri sitting back to back on a common brightly colored pedestal. A naked bulb hangs from the ceiling, lighting up Manjushri’s red effeminate body adorned with bright jewelry—gold, green, and turquoise.

The murals of the meditating Buddha are repetitive, like Warhol’s screen paintings. They line the walls of the temples and also the interior of the chortens in the temple complex. 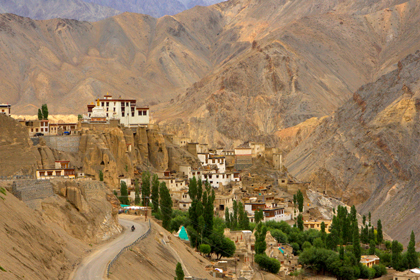 It is noon by the time we leave Alchi. The sky is a limitless blue; a blazing sun sears the barren peaks to purples and reds. The scenery at Lamayuru is like a desolate moonscape. The wind has weathered the mountains here to form conical rocks. We are at once bathed in a golden light.

We part with the Indus at Khalste. The river snakes away from us towards the border town of Kargil, then past the border into Pakistan. The bucolic Ladakhi village houses have given way to military barracks. The Indian Army fought a war not far from here in 1999. Soldiers perform their exercises; long convoys of green trucks carry supplies, choking the road. On the hill above us, a soldier rests his gun on a pole bearing prayer flags. It is paradoxical: prayer flags blow mantras in the wind, promoting peace, compassion, strength, and wisdom against the harsh backdrop of war and unrest. 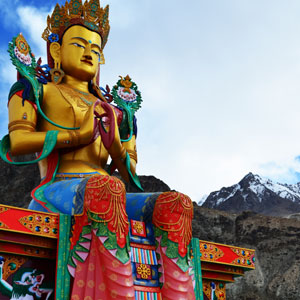 Centuries ago, the Buddha looked eastward to spread his teachings. In Deskit Gompa, a gigantic golden sculpture of the Maitreya Buddha dominates the barren landscape of the Nubra Valley. In Thiksey Gompa, the statue of the Maitreya is 3 stories high. Also revered in this land of monasteries is the 14th Dalai Lama. He traveled westward as a young boy, across this unforgiving terrain to escape the Chinese invasion, to preserve the teachings of the Buddha. We encounter many monks in these monasteries. Some are Tibetan refugees, some are pariahs ostracized by their families.

Clad in maroon and yellow robes, their guttural chants rise and fall like spiritual waves. Some monks lead very simple lives, detached from the material pleasures of the world below them.

The hard life of the Ladakhi people is tied to the seasons. In the ephemeral days of summer, they earn a living by cultivating crops, driving tourists around, and doing business in town. Markets are bustling, cattle graze on the banks of the Indus and children go to school in packed school buses. Then winter comes quickly, harshly. The cattle hurry into the sheds, their fodder is stored on the rooftops. Schools, shops, and mountain passes close, shutting the mountains from the plains, bringing life to a halt.

The road trip in Ladakh stirs the soul. We are diminished, humbled, and speck-like in the midst of the great Himalayan peaks. We are touched by the warmth and openness of the mountain people. We learn from the Indus River, which knows no boundaries. Originating in China, the Indus, like Alfred Tennyson’s “Brook” chatters as it slips and slides through India before winding into Pakistan and finally curving and flowing into the Arabian Sea. Men may come and men may go, but the Indus seems to go on—forever.