Travel: In Royal Style on the Palace on Wheels 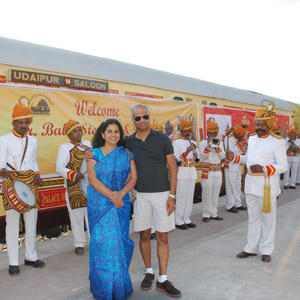 Few things are as quintessential to ancient India as the Maharajas. And few experiences in contemporary India can match the Palace on Wheels—an ultra-luxurious train tour of Rajasthan and other parts of North India—in rekindling the bygone era, making you, their guests, feel like Maharajas indeed.

(Left) The author and her husband: the grand welcome that is iconic of the experience. (Photo: Usha Rao)

Having had a modest wedding ceremony 25 years ago, my husband and I found a perfect romantic getaway for our anniversary, a compromise between his desire for luxury and my own ascetic leanings. We took a celebratory trip on the Palace on Wheels, the imperial train that runs through Rajasthan. Meant to be a blast from the past, this is royal nostalgia, retrofitted.

After a magnificent welcome with red carpet, shehnai, fresh flower garlands, and tilak, the train left Delhi heading west. During the day, the panorama of yellow mustard fields whizzed past. Nights were reserved for longer train journeys to arrive early next morning at one of the cities on the schedule. 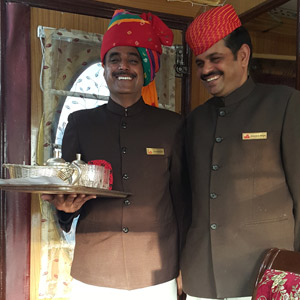 (​Right) Virendra Singh and Om Prakash, the personal genies of the Raos. Being treated like royalty is another defining trait of this experience. (Photo: Usha Rao)

The Saloon Culture
Each saloon (train car) held eight tourists. Designed for two adults, the royal suite came with a bathroom, shower included. Named after Rajasthan’s cities—Bharatpur, Jaipur, Jodhpur—there were 14 saloons (compartments) in all. Stylishly decorated, they came with TV, WiFi, and two dedicated hosts. In the Bharatpur Saloon, Virendra Singh and Om Prakash, our personal genies, were dressed in Rajasthani suits, turbans, and smiles, bowing as they appeared at the click of a button. Coffee, tea, and snacks materialized in minutes, adding to our sense of luxury. 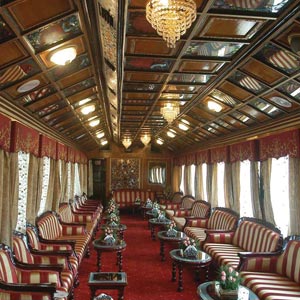 Located somewhere in the middle of the train were the spa saloon (appointment only, please) and the bar. Sanjay, the bartender, cheerfully displayed his knowledge and worldwide selection of alcohol from behind the counter. The rest of the car, where guests relaxed before and after meals, was ornately furnished. Strategically located after the bar were the Maharaja and Maharani restaurants, sandwiching a kitchen from where the chefs presented their array of delicious Indian food.

Every morning, we stepped onto the red carpet and beheld a new city. Each time we were welcomed with a band, garlands, tilak, and an occasional elephant or camel ensemble.

Colorful Characters
Umesh was the coordinator and manager of our third of the train. “Gooood Morniiing Hooonorable Gueests,” Umesh would greet us every morning in his long drawl. Umesh spoke in his very own Rajasthani flavor of English. Our amalgamate English had Indian, American, British, Indian-American, Indian-British, French, and Belgian flavors.

Umesh dressed every morning in a suit, a tie, a well-twisted mustache and a ready smile. His eyes lit up when one of us noticed the coordination of his ties—Taj Mahals for Agra, camels for Jaisalmer, and elephants for Jaipur. With gentleness to his walk and talk, he bowed his way in and out of situations, pleasant and unpleasant. One thing he could not hide was his passion and commitment 34 years into this journey.

Happily taking charge of his allotted set of 35 tourists, Umesh meticulously planned our activities every day. “Todaaaay, you will be in the Maharaani Restauraant for the 7:30 pm dinner shift,” he would say, apologizing profusely if there was any deviation from the plan. With the characteristic Indian tilt of the head, he left us every night with a detailed plan for the next day.

“You will have some pain and some pleasure from the next activity,” I remember him saying before our camel ride in Jaisalmer. “The pain you will feel just for two days, but the pleasure you will treasure for life,” he added.

He always concluded the day, with a short recap. “As you saw today, honorable sirs and madams, we need three things to drive in India—a good horn, a good brake, and good luck.”

Together with Umesh, the city tour guides added color and character to our trip. There was the well-dressed, English-proficient history major at Jodhpur; the casually clothed Agra gentleman with a water bottle held high so we could spot him; the 20-year-old who spoke in numbers; and a young man who even pulled it off with a few words of English between Hindi and vigorous gesticulations of his arms. There was the young “cycle rickshaw ornithologist” at the Bharatpur bird sanctuary who knew his birds in English and Hindi. “Cor-moorant” or “Jal-kaag” he said, hoping we could spot one in either language. Our parade of rickshaws must have been a spectacle for the visiting birds.

Early one cold morning, armed with woolen blankets from Umesh and caps and gloves quickly acquired from vendors, we set out in an open bus to the Ranthambore National Park. Once a hunting reserve for royalty, the animal sanctuary was abuzz with jeeps and buses. The search for a glimpse of the “fearful symmetry” of the royal tiger ensued. Our breaths held, we strained to spot stripes amidst the golden grass. Sadly, the creature remained elusive and we returned to the train with nary a glimpse. Yet I took back a sense of wonder at the bounty of peacocks that we encountered. 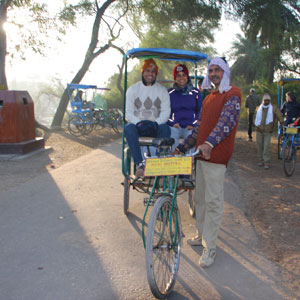 (Left) The Raos in a North Indian village—a stark contrast to the Palace on Wheels. (Photo: Usha Rao)

A Slice of History
The palace-hopping happened by bus, boat, golf cart, tuktuk, and, on one occasion, an elephant. Point, click, shoot—our camera lenses absorbed the wellpreserved grandeur and glory of the forts and palaces, as the guides shipped us back and forth from the 16th to the 19th centuries. The weapons that survived stand tribute to the battles won and lost. As we toured the zenana or women’s quarters, I could feel the agony and ecstasy of the wives and concubines of the Maharajas. Secret passages clearly demarcated the pecking order. Women were tucked away from plain sight behind exquisite architectural design. I stopped to view the world through the latticed marble screens for a vicarious moment, but quickly traded the grandeur for my unobstructed view.

The site of the largest jauhar, self-immolation of royal women (and children), in Chittorgarh stands testimony to the screams and honor trapped within. The menfolk in the mardana, or men’s quarters, exhibited elaborate mustaches. As a commentary to the past, men with extravagant whiskers model at the museums, palaces, and hotels. History is quite magnificent.

Standing testament to the 18th century Raja Sawai Jai Singh’s scientific proficiency is the observatory Jantar Mantar in Jaipur. Literally meaning calculating instrument in Sanksrit, this astronomical wonder is an oversized work of masonry used to measure time, predict eclipses, and track planets and stars. The large hemispherical bowl in the earth—Jai Prakash—is a mirror for heavenly bodies and links planets to horoscopes. The size of the world’s largest sundial (88 feet tall), the Samrat Yantra, was meant for precision. With childlike excitement, we factchecked the time shadow with our watches. A three second difference for 18th century technology was remarkable. The Jantar Mantar remains the crown jewel of our trip. 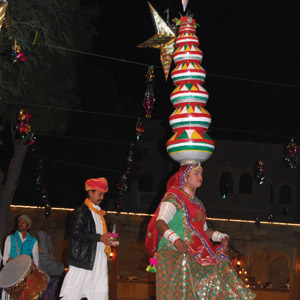 The Fond Farewell
“Tonight we have a special surprise,” declared Umesh one evening after our camel ride. “Please come in your party clothes,” he requested. We were ferried to a palace turned hotel. There, on the lawns, dinner was laid out in a colorful festive arrangement. As we dined, a Bhavai performer gracefully balanced eight earthen pots on her head while dancing on the edge of a sword. With colorful clothes, ornaments, and bracelets covering her entire forearms, she quickly enticed the audience to dance along. Generally shy, I had never felt more compelled to get up and dance at that moment.

With traditional turbans, the Manganiars (musicians) on stage captured the spirit of Rajasthan with a high pitched, haunting rendition of the folk song “Kesariyaa ...”

Rajasthani women cover their heads and wear embroidered bright yellow and red clothes. Mirror work on the skirts, ornaments, and large bangles covering most of their arms enhance the colors. Men don signature orange or red turbans. Even camels and elephants flaunt these colors. The historic palaces and forts have given their cities their own colors—Jaipur the pink city, Jaisalmer the yellow city, Udaipur the white city, and Jodhpur the blue city. And woven between them is a diverse landscape ranging from the orange sands of the Thar desert to dry forests, green hills, and endless patches of yellow mustard farms. In Rajasthan the land of the rajas (kings), it seems like an eternal festival of colors.

We ended our journey with a stop at the Taj Mahal. This greatest monument to love was the perfect finale to our celebration of 25 years together. The seven days and seven nights of wining, dining, dancing, laughing, talking, and sharing with people from around the world made for a memorable cultural kaleidoscope. The last meal was bustling with farewells to our newly extended family. We reserved the best and last goodbyes for those who made this a trip for our history books, the “honorable hosts”—the true wheels of this palace.

A technology entrepreneur, Usha Rao is influenced by her children’s flair for writing. She lives in Seattle and can be reached at Ushats.rao@gmail.com. Source: India Currents.