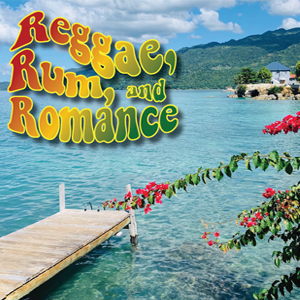 We may not be able to travel freely yet, but travel writing lets our minds roam. We can relive experiences, make plans, or just enjoy the ride. Here we take you to Jamaica, which is about beach parties and lush jungles. Curried goat and marijuana. Waterfalls and dirt roads. Bob Marley and Usain Bolt. Plus—surprise!—you’ll find enchanting traces of India on this tropical Caribbean island.

From Atlanta to seafront paradise in under three hours! Jamaica is a mountainous island 90 miles south of Cuba and about 100 miles west of Haiti. About fourteen times smaller than the state of Georgia, Jamaica has beaches, waterfalls, rivers, mountains, jungles, and the distinct Rastafarian culture. I got off the plane in Montego Bay, eager to jump into my rental car and hit the road. 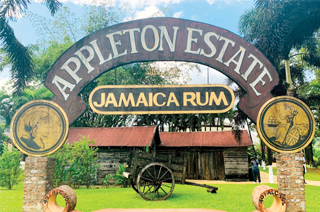 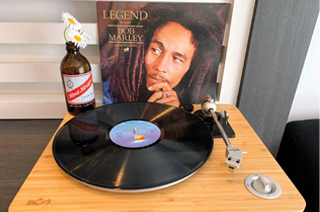 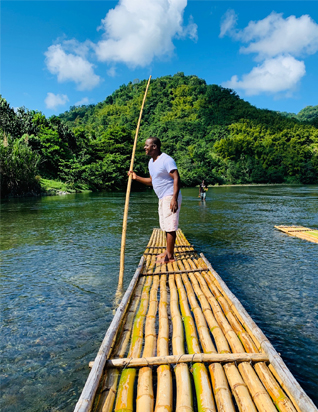 “Only one person works at this car rental agency,” an airport security guard declared nonchalantly, as I stood at an unmanned counter. “She is a nice woman,” he continued, in a jolly tone that one would use to describe a friend or a relative. I half-expected him to share the woman’s Ram-kahaani (life story) before divulging her whereabouts. “She likes to take long lunch breaks,” he said, smiling. “You should get a cocktail at the bar while you wait for her,” he advised, pointing to the café diagonally across.

“Ah, yes. But you see, it is always rum-o- clock or beer-thirty somewhere on the island!” he said, chuckling.

“I need to get going,” I protested.

“Madam, you are on island time now. Relax!”

Perhaps it was my imagination, but everyone around did seem to be moving at a slower pace than I have been accustomed to in the States. Island Time is a real thing! It reminded me of IST—Indian “Stretchable” Time.

I did eventually get my rental car from the “nice woman” who charged me extra for vehicle insurance. She gave me a dirty, beat-up Mazda with hubcaps held in place with zip ties! Jalopy or Jaguar, I was determined to discover the island as soon as I checked into my villa.

My “villa,” as luck would have it, turned out to be a room in someone’s private home. Only recently, I had rented a two-bedroom apartment with a private pool in Phuket, Thailand, for half the price! I realized that Jamaica is two parts paradise, one part tourist trap, and one part paradise-in-progress. 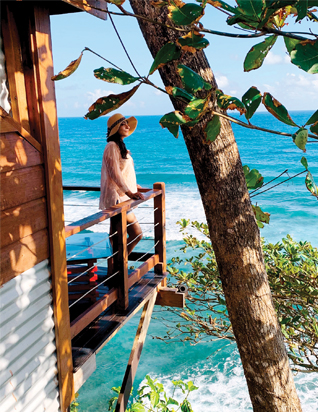 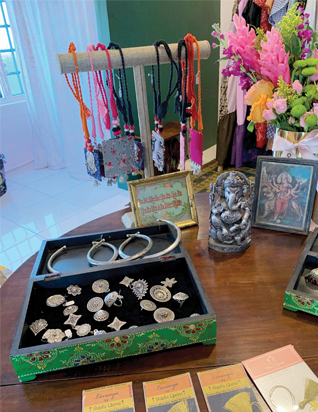 Biting back my ire, I left the “villa” and checked into the only available all-inclusive resort near Runway Beach along the northern coastline. Jamaica, like other Caribbean islands, is known for its high end and mid-range all-inclusive resorts. My retreat was packed with loquacious seniors from Britain. With them, I enjoyed my first Jamaican meal of curried goat and jerk chicken. We pooh-poohed Donald Trump’s antics and discussed Kamala Harris, then a presidential hopeful with Jamaican-Indian heritage.

(Left) The author enjoying a view. Top: Indian jewelry store. Bottom: The bay at sunset on a cloudy day.​​ 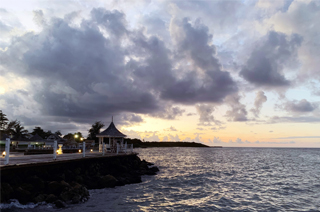 A professor of social sciences from the University of Manchester regaled me with the history of the island and told me about the arrival of the Indians. Indians are believed to be the third-largest ethnic group in Jamaica. Between 1845 and 1917, the British government opened recruiting centers for indentured labor in Calcutta and Madras. The Indians came to Jamaica, not to migrate permanently, but intending to make money and take it back to India. But not all plantation owners lived up to their end of the contract. They lobbied for the government to allow the laborers to stay, thereby saving the cost of sending them back to India. A few decades later, Indians from Punjab, Sindh, and Gujarat came in smaller numbers as immigrants looking to do business like their Arab and Chinese counterparts.

I asked the chef of the restaurant about the origins of the curried goat, a Jamaican specialty. The dish, it turns out, was introduced by Indians. The Indian settlers also brought tamarind, jackfruit, mangoes, and “ganja”— meant to be smoked for spiritual purposes.

Marijuana, as I came to discover, is omnipresent on the island. The “No Smoking” signs in public areas may not preclude smoking marijuana! Don’t be surprised if your server at a roadside stall brings your order of jerk chicken with a joint held between his lips.

I made my way to Negril’s famous seven-mile beach in time to catch a magnificent sunset. The sky was nature’s canvas, smeared with wild splashes of feisty orange, purple, and pink. Gentle waves reached effortlessly for the beautiful white sand beach. It was the calm before young partygoers emerged from their crypts and turned the restaurant-lined beach into a nocturnal playground. The stereo systems got louder as the sun sank beneath the horizon. Reggae music was everywhere. Pictures and paintings of the iconic Bob Marley hung on restaurant walls and storefronts.

I listened to reggae again the following day—playing on a cell phone that belonged to the captain of the bamboo raft that I was on. It was smooth sailing down the river—a vastly different experience from the potholed roads I had driven over. The captain asked me where I was from, and when I mentioned India, his face lit up. “My great-grandfather was from India. Madras. You know Madras? Chennai?”

We talked a little about India. About cricket. And jackfruit.

“I will take you for the best jackfruit preparation and curried goat in all of Jamaica,” he declared. An hour into the ride, he pulled over by a makeshift eatery where an elderly woman was serving food from big, steaming pots. There were several other tourists, mostly British, enjoying the authentic fare in a rustic setting.

Back in my jalopy, I made it to the busy town of Ocho Rios, better known as “Ochi.” It was abuzz with shoppers. The Taj Mahal shopping center, an enclave of stores owned mostly by Indians, is anchored by a Taj Mahal shaped building. It could well have been a bazaar in New Delhi’s Lajpat Nagar. I haggled in Hindi with a shopkeeper for two Jamaican soccer balls for my children back in Atlanta. I want to believe I got a reasonable price, but in truth, I think I got played—just like in India!

Driving past the impressive colonial structures in Port Antonio, I was reminded of the buildings constructed during the British Raj in and around my hometown of Dehradun. Port Antonio seems to have preserved its past well, making it a popular getaway for the rich and famous. I steered away from the coastline towards the jungles in search of waterfalls.

The jungles, once a battleground for the British colonial armies and the Spanish forces that jostled for control, are a verdant oasis in themselves. Trekking into the lush forests, one is bound to chance upon cascading waters. The Dunn’s River Falls flow downhill in a succession of tiered waterfalls. With appropriate amphibious footwear, one can hike up the waterfall itself, ascending against the gush of flowing water. It is a sensory experience that calls for one’s complete attention to the moment, free from the competing push and pull of the past and future. Only then does the accumulated stress of urban living wash away with the flow. Reach Falls in the east have the makings of a private paradise during off-peak hours. Here, the sound of flowing water underscores the rustle and chirp echoing in the woods. 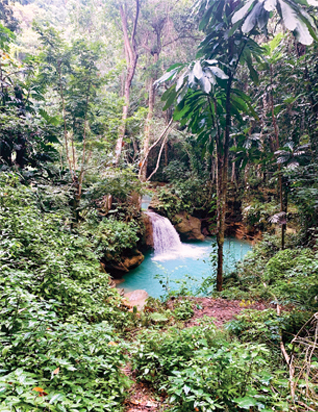 Further south, emerging from the jungles, I arrived in Kingston. As one might expect, Kingston is a bustling city with big cars, shopping malls, and fancy homes. The city has a unique vibe with a rousing music scene and nightlife. The colors of the Jamaican flag—yellow, green, and black—were everywhere. On electrical poles that supported a jumble of wires, on trees, on storefront walls, on clothing, and on political posters. The view from the hills overlooking the city is spectacular, especially around dusk when the lights flicker to life. A bedazzled ground mirrors a speckled sky.

In stark contrast to the developed infrastructure around Kingston is Treasure Beach, on the southern coast. My hotel, a new construction with modern aesthetics, could only be accessed via a single dirt road. The unpaved track reminded me of kachcha backroads in India. I saw a few signs for yoga between shanty shops that offered basic necessities at a high cost. A few newer homes stood amidst abandoned constructions. The landscape was raw and rugged for the most part. The British expatriate who owned the hotel directed me to another Englishman’s establishment for dinner. The Brits were everywhere.

Like the whiskey distilleries in Ireland, the Appleton Estate Rum Factory north of Treasure Beach offers well-planned guided tours of the facility. My father, a fan of Old Monk Indian rum, would have enjoyed the visit and the rum tasting.

I spent my last night in an uber-trendy hotel, a stone’s throw from Usain Bolt’s Tracks & Records sports bar in Montego Bay. The luxurious hotel located on the “hip strip” could well have been on the Sunset Strip in LA, next to the boutique Mondrian Hotel.

On the beach at sundown, I stood reflecting on the seamless disparity between the developed and dilapidated in Jamaica—much like the contrast between the affluent and the neglected in India. 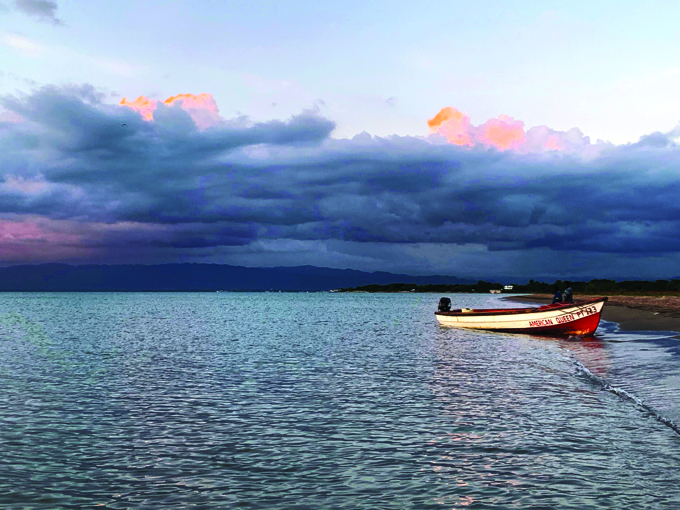 A loud thud directly behind me interrupted my reverie. A coconut had fallen from the tree next to me. A passerby pointed to the sign close by: “Beware of falling coconuts.” There are perils in Paradise, after all.

Reetika Khanna, an avid traveler, is a freelance writer based in Atlanta. She is the author of Kismetwali and Other Stories, a finalist for the 2016 Townsend Prize for Fiction.