Travel: Roopkund: A Trek to the Himalayas' Skeleton Lake 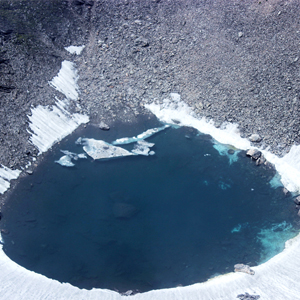 Legend has it that the hundreds of skeletons that line the shores of Roopkund belong to a royal procession that invoked the wrath of Nanda Devi. ARUNA PADMANABHAN recalls her memorable trek to Roopkund from thirty years ago.

“They say some of those bones are this long,” the man said as he held up his hand from the ground to the middle of his thigh. Though he had not mentioned any specific bone, I thought it was a femur. Listening to him made me recall an article I had read about Roopkund which said that the bones scattered around the lake belonged to tall people. Many residents of the area thought those came from skeletons of giants.

[Left] An aerial view of the mysterious Roopkund lake.​

We were in the forest village of Wan, at a tiny tea stall. This was the first stop on our trek to Roopkund, a small mountain lake, nestled at a height of 15,000 feet in the Himalayas. The human remains found there have long intrigued all those who have heard of them, whether villagers living nearby, or travelers from afar as well as researchers.

Dusk was gathering as we made our way back to the forest rest house. The caretaker told us that he had found a guide from the village, Gopal Singh, who’d meet us in the morning. Thirty years ago, there had been no formal companies to take care of arrangements for a trek. You arrived at a mountain village, the starting point, word was sent around, and a motley crew assembled: a guide, a porter to help carry supplies, and on this occasion, also a twelve-year-old boy, Shamu, who didn’t have any particular role but was happy to tag along.

“Why do you want to climb all the way there?” he asked me the next day as our group left the village. I listed my reasons for coming to the mountains—spectacular vistas and the pleasure of walking on trails far from human habitation. I doubt my answers  satisfied him. I didn’t think much about it then but now I can understand Shamu’s puzzlement. For the mountain folk, going to Roopkund is part of an important pilgrimage, whereas our trek was not an act of devotion. I think he forgave us our idiosyncrasies and walked alongside, with a mountain dog close at his heels, peppering me with questions and often laughing at my responses.

The path took us through forests of big oaks and beautiful rhododendrons. Every now and then we caught glimpses of snow-covered peaks through the gaps in between the trees. But nothing had prepared me for the moment when the forests fell away abruptly, and I was at the edge of an alpine meadow. The view was breathtaking—an emerald green expanse of rolling hills, and right behind them: snow-covered peaks of the mighty Himalayas. The sheer majesty of these mountains made me want to bow low in reverence; their grandeur and beauty were displays of an immense power, beyond the grasp of the human mind. No wonder stories from mythology talk of these peaks as the abode of gods.

Till now the path had been fairly easy and none of us had any complaints. During the walk through the day, we’d sustain ourselves with biscuits, mainly Parle-G ones. The main meal of the day was khichdi in the evening. This humble dish of lentils and rice had never tasted better, made all the more special by Gopal Singh’s choice of seasoning—wild mountain onion, freshly pulled from the ground at the campsite.
“It’s jambu,” he said referring to the onions. “You find it only in the mountains, but the aroma travels back with you to the plains.”

As we crossed the meadows of Ali Bugyal and Bedini Bugyal, the silhouettes of Mount Trisul and Mount Nanda Ghunti grew bigger. Many peaks in this region are linked to the goddess Nanda Devi—within the Nanda Devi sanctuary, there is her bed (Nanda Khat); a little further, her fortress (Nanda Kot); then her headdress (Nanda Ghunti); and finally the peak that many climbers consider the most majestic in the Himalayas, Nanda Devi—long esteemed as a manifestation of the goddess herself.

I had heard of processions traveling through villages in her honor before my trip, but at the time, I did not have any appreciation for the importance she has in the local mythology. However, a recent New Yorker article about Roopkund piqued my interest and I found myself reading an article by William Sturman Sax, an American anthropologist, who took part in a royal procession for Nanda Devi in the 1980’s. His description and accounts of other mountaineers made me see Nanda Devi as the myths and legends describe her—in her various forms—the gentle daughter of mountains who bestows joy and wisdom, who takes care of her devotees as a mother would, and a goddess willing to use her weapons to defend her followers.

And yet, it is best not to show her any disrespect. According to one of the legends, the remains at Roopkund belong to pilgrims of an ill-fated royal procession from long ago. As the story goes, Nanda Devi visited a kingdom where she was not received with due respect. Angered, she brought misery upon the population with famine and curses. The ruler was advised by sages to go on a pilgrimage to seek her blessings. But the king, refusing to abide by the rules of asceticism during religious journeys, took along a troupe of dancing girls, provoking the wrath of the goddess. She sent down a whirlwind and the royal party met its end in the icy waters of Roopkund.

I heard a slightly different version of this story from our guide as we reached Pather Nachauni where, he said, the dancers had been turned to stone. I looked at the rock formations at the edge of the meadow. In a landscape full of legends and myths, where the mind turns easily to the fanciful, it was easy to think of those shapes as dancers frozen for eternity by a goddess’ curse.

We had pitched our tents in the afternoon and as on previous nights, I fell asleep soon after it became dark. But now, in the middle of the night, I was wide awake. What had started as small scraping sounds had grown louder and I was convinced that some wild beast was clawing against the side of the tent. I lay still, not daring to move. “What do you think that is?” I whispered to my companion. “No idea,” came the reply.

Nothing could persuade me to go outside to investigate. He was the more courageous one, and so stepped out cautiously. After a few moments I heard him call out to me. When I finally ventured into the dark, I was face-to-face with the wild beast of my imagination. It was the wind. The gentle breeze of the evening had turned into a strong wind. It had driven away the clouds and a spectacular view unfolded before us—snowcapped mountains glinting in the moonlight.

When we climbed to the next stop, Bhagwa Basa, our luck with good weather ran out. It rained every now and then. The tree line was far behind us and now meadows gave way to scree and snow. The path became more and more treacherous. As we rounded a bend, Shamu, who was always as sure-footed as a goat, disappeared down the side of a trail. I looked in horror as he slid down the snow but fortunately, we were not on a steep slope. He took a few tumbles, but a bundle of firewood on his back helped break the downward slide. His dog ran down behind him and we watched as they clambered up. Both boy and dog shook off the snow and bounded up the path again, seemingly untroubled by their fall.

At Bhagwa Basa, the rain became snow. We huddl-ed inside stone shelters, doing our best to keep warm but there was ice all around. Gopal Singh and his helper cleared some of it so that we’d have space to lay out our sleeping bags at night. The weather remained bleak the next day as well. It was impossible to comp-lete the trek in those conditions and we had no choice but to start our downward journey.

Back in Delhi, my time was occupied with classes, assignments, and term papers. Back into my routine, I did find time to keep one promise. As it had happened on other trips, the villagers who had accompanied us requested prints of photos we had taken with them during the trek. I mailed a set of photographs to the address Gopal Singh had given me. Many weeks later, when I got back home from college, my sister held up a piece of paper saying, “Look at what came in the post.”

It was a crumpled sheet, torn from a notebook. It had my name and address on one side and on the other there was a line of thanks from Shamu, written in wobbly letters. No envelope, no stamp, but the sheet bore a post mark. My sister and I wondered in amazement at all the willing hands at the postal service that had passed along this scrap of paper, so that a thank-you note from a scruffy boy in a remote mountain village could find its way to Delhi.

Shamu’s question still comes to mind. The American climber, Willi Unsoeld, whose poignant story unfolds at Nanda Devi, writes, “My final prayer was one of thanksgiving for a world filled with the sublimity of high places, for the sheer beauty of mountains and for the surpassing miracle that we should be so formed as to respond with ecstasy to such beauty.” Now reading the words of Unsoeld, I think I have found an answer.

Atlanta-based Aruna Padmanabhan is a freelance who writes about her penchant for eco-tourism and nature.