Text and Photos by Bhaskar Krishnamurthy 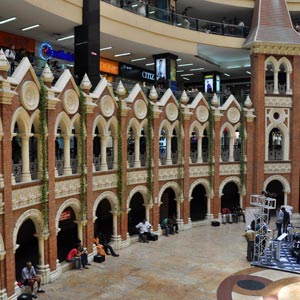 
“The sound, smell and the steamy weather of Chennai are unmistakable,” says V. Krishna, my copassenger on the Shatabdi Express train. An architect by profession, Krishna is a mine of information about Chennai’s affinity for culture, language, and its politics—and, of course, its reverence towards cinema and celluloid heroes. 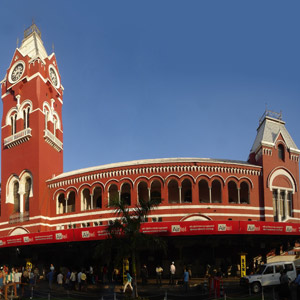 If you arrive in Chennai by train from any part of the country, the beautiful brick-colored Chennai Central Station stands sentinel-like in the city, inviting you with open arms. Now renamed in honor of Chennai’s yesteryears movie star and one of Tamil Nadu’s successful chief ministers, M. G. Ramachandran, it is one of the major railway hubs in the country and the gateway to South India. The 145-year-old heritage structure is witness daily to hordes of passengers travelling in different directions on the Southern Railway, suburban rail, and Mass Rapid Transit System (MRTS).

Occupied by the Dutch, Portuguese, French, Armenians, and British before India’s independence, Chennai—formerly known as Madras—is one of the four largest metropolises of India. Today, this coastal city along the Bay of Bengal is a potpourri of cultural riches and architecture, and one of the leading film and music production centers in India. 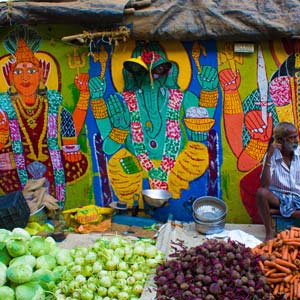 It doesn’t take very long for the visitor to feel the pulse of Chennai. A couple of miles away from the station is the famed junction, Parry’s Corner. This old locality of Chennai is home to important landmarks like the Madras High Court, Parry Building, Reserve Bank of India, Burma Bazaar, and General Post Office, to name a few. Buzzing with 24-hour activity and business, its narrow by-lanes and sidewalks are always crammed with people. It encapsulates the traditional, enterprising, and culturally rooted society of the metropolis. 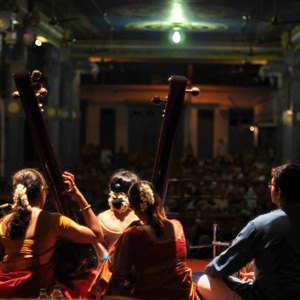 Chennai’s iconic neighborhood, Mylapore, is a treasure trove of history and architecture. Mylapore, which translates as “Land of the peacock scream,” is the hub of South India’s Carnatic music culture and home to more than a dozen key cultural venues and concert halls known as sabhas. Every year, connoisseurs of Carnatic music eagerly anticipate the concert season that takes place through the month of December. As Shivasundaram, a budding musician from the southern city of Madurai aptly remarks, “In Chennai, music is more than a livelihood, it’s actually life itself.” Indeed, a visit to Mylapore is incomplete without witnessing a Carnatic music concert. From the most celebrated musicians to budding young artistes, Mylapore’s music sabhas are considered the launch pad for their success in the rest of the world.

At the height of the 7th century, the Pallava kings built the Kapaleeswarar temple in the Dravidian architectural style. In the middle of the 16th century, the Portuguese destroyed this great temple and built another architectural marvel, the all-white San Thome Basilica, a church that houses the tomb of St. Thomas, one of the apostles of Jesus Christ. Later, when the Tuluva dynasty ruled the region, using the remains of the old temple, they rebuilt the now existing Kapaleeswarar temple, featuring a 40-metertall, elaborately carved gopuram (ornamental temple gateway) that is, for all intents and purposes, Chennai’s oldest skyscraper. Every evening in this Shiva temple, with its several beautiful shrines and halls, is an impressive amalgamation of culture and religious celebrations.


“George Town has some of the finest heritage structures in the city, such as the High Court, Fort St. George (the assembly of the state government), Armenian Church, and more,” says Srinivasan, an advocate who practices in the nearby High Court building. Walking through George Town’s small narrow lanes is no less than a history lesson in real time. From the days of poet-philosopher Thiruvalluvar in the 1st century, to the time of the poet Bharathiyar, an icon of India’s freedom movement, there are hundreds of buildings, temples, mosques, and churches that tell the tale of the land. 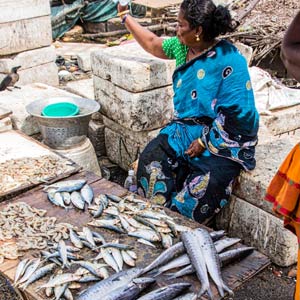 (Right) Selling fish, fresh from the Bay of Bengal.

Marina Beach, the longest urban beach in India along the shores of the Bay of Bengal, offers dreamers, lovers, artists, entertainers, shoppers, entrepreneurs and everyone else a space of their own. Along this 12 km stretch of uninterrupted sandy shores, Chennai absorbs you into its rhythm and gently allows you to embrace the nuances of its ethos. 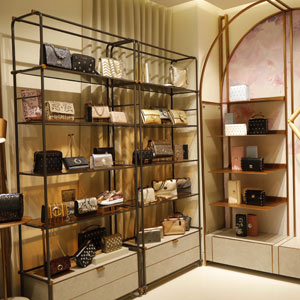 Chennai’s humidity and heat will always differentiate it from other cities in India; the casual visitor will feel it more so. With its six million inhabitants, Chennai, in a nutshell, can feel like a country within a city, sometimes contained, often overwhelming. Deities from varied beliefs are worshiped at small shrines that pop up on virtually every side street; luxury bungalows appear and disappear as fast as luxury cars and bullock carts on the roads. The city offers a dizzying range of contrasts—high-end boutiques, gleaming malls, and tiny pedestrian side shops; contemporary fine dining fare to traditional banana-leaf meals; theaters screening the best of Bollywood to artistes performing in small theaters; big clean roads and flyovers to ever expanding interior neighborhoods. Chennai is truly a kaleidoscope of multilayered humanity in one mega city. Yet, even as it has embraced the present, traditional Tamil culture and language, which date back thousands of years, remains vigorously alive. 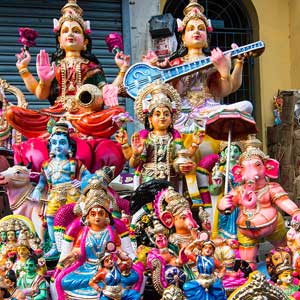 Chennai has played a vital role in the evolution of traditional and contemporary art in India. If Mylapore is the heart beat of classical music and dance, Cholamandal Artists’ Village is home to famous artists who work in all manner of media—weaving, painting, metal sculpture, and pottery, to name a few. It’s a lovely little oasis tucked away on the coastal road just outside the hustle and bustle of the city center, lively with birds, flowers, trees, and clean lanes.

Idli, dosa, sambar, chutney and a steaming cup of strong, filter coffee—be it a roadside eatery or 5-star cafe, this is Chennai’s signature food ensemble. But the times they are a-changing and global cuisines now resonate equally well with younger, widely-traveled generations. “With the influx of a returning expat population and visiting NRIs (Non-Resident Indians), Chennai’s food scene is growing very fast,” says Ganeshan Bollianda, who runs his own consulting company in the leafy Adyar neighborhood. Korean and Japanese restaurants flourish alongside the local cuisine, cementing the city’s foothold in India’s growing ‘foodie boom.’ Bengali, Punjabi, Rajasthani, and Kerala cuisines can also be savored all over this ever-expanding metropolis. If that were not enough, a night culture and several drinking holes jostle for attention.

“Cinema is the lifeline of this city,” says Saravanakumar, a well-known cinematographer who has worked with award-winning films. Colloquially known as Kollywood (a humorous reference to Kodambakkam, the neighborhood housing Chennai’s film studios) movies are serious business in Chennai! Saravana adds, “For many of the locals, it is a sin if they don’t get to watch the first day, first show of their favorite stars, particularly if Rajnikanth is the main attraction.” There are cineplexes, independent cinema, and small theaters to satiate your interest. Watching a movie with a frenzied Chennai audience would be an experience in itself! 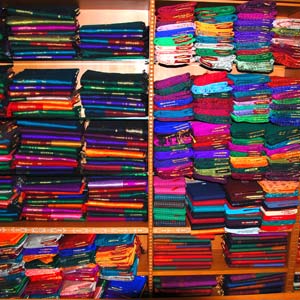 (Left) A sari store, full of colorful silks and cottons.

“Shopping for saris, jewelry, decorative handicrafts, and the best antique furniture is [a] Chennai special,” says L. Mangaleshwari, who works with the Tamil Nadu Handicrafts Emporium. A trading post since the days of the East India Company, Chennai is a shopper’s delight to this day. Like elsewhere in this fast-modernizing country, there are mega malls aplenty; yet, traditional shopping at stand-alone stores and street-side bargaining experiences have not changed much. Thyagaraja Nagar, or T. Nagar as locals call this area, is the shopping heart of Chennai. Ranganathan Street stocks everyday clothing and household items, but a short way down the nearby South Usman Road is where the real action is, amidst the mega jewelry dealerships and silk stores. Some of the five-storied sari emporiums in Chennai are beyond description—you’ll have to walk into one to experience the array of colors, textures, and designs on display and the rush of customers that becomes a flood during festive seasons. For an experience of Chennai style street-side shopping, drop in at Mylapore-Luz Corner. The pavements are so packed with shoppers that you’ll probably float even if your intention is to walk. No leisurely browsing here!

Arumugam, working in an IT startup, says, “From the temples to the trees, from yellow rickshaws to luxury imported cars, Amma Canteens to Four Seasons, you may fly to Silicon Valley, but your journey begins with a visit to Chennai!” He’s right, since a trip to Chennai— more specifically, to the U.S. Consulate in Chennai— was the first phase in the process of flying to the West for a large part of the migrating South Indian population. He adds, “Don’t come just for the visa, take away a piece of Chennai’s life and joy with you.” In passing, Arumugam also says, “There is one thing you must never do. You should never call a local a “Madrasi” to his or her face; you will definitely cause offense!

Bhaskar Krishnamurthy, an award-winning photojournalist, is the author of Balarama’s Story: An Elephant’s Journey (Peppertree Press), an illustrated children’s book. He co-produced Elephants in the Coffee, an acclaimed documentary. Based in Kansas when he’s not traveling, Krishnamurthy is involved in initiatives that help people in remote corners of India.