Travel: The Age-Old Circle of Life in the Jungle 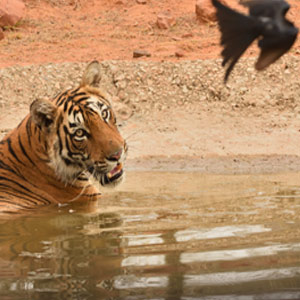 (Left) A drongo flies by Arrowhead, the tiger.

On safari at Ranthambore National Park, a visitor muses on close encounters with the mighty tiger, and on the rhythms of nature.

Gusts of dry, warm wind hit my face. The jeep’s handrail was too hot to touch. Summer was at its peak in Ranthambore National Park. Long strands of grass stood golden against a backdrop of dark rocks. The land was parched. Stunted trees made for open forest cover.

In the distance we saw a group of deer approaching. The hind leading the small herd moved forward a few more paces and then stopped. “Watch,” Nadeem, our guide, whispered. “See? The tail went up first. Now the sambar will let out short, sharp barks and stomp with the hooves at the same time. That’s the alarm call.” Right on cue, the sambar barked. The deer following it stopped in their tracks, ears twitching and noses raised in the air. Their nervousness was palpable. And so was their desperation. The water hole was so close yet they would not be able to quench their thirst—tiger was lounging there.

The parched forest…a herd of deer in search of water are held back from a nearby watering hole
because of a tiger lounging in it…and a colorful peacock—
all part of the drama and contrasts of a day in Ranthambore.

There was complete stillness all around. Birds sat on the branches overhead, silent. Long moments passed before a drongo left its perch to come down to the water, flying by the tiger’s head, the only creature cheeky enough to venture close to the predator. The deer stayed at a distance, watchful but unwilling to move away. There was no saying when they would find water next. The tiger slid further into the water, panting hard. The heat was unbearable for all the creatures.

This was our second safari in the park and our second tiger sighting; luck was on our side.

The previous day we had driven across an arid landscape towards Ranthambore National Park.

Young langur monkeys leapt out of the way as our jeep went over stone paths. The adults sat a little distance away, long arms dangling over their knees. Each time a vehicle passed, their wizened faces followed the movement, as if wryly amused at our frantic activity.

At the end of the lake are massive ramparts of the Ranthambore Fort.
These former hunting grounds and pleasure pavilions of the maharajahs, venues of countless shikars
in years past, are now part of the tiger reserve.

As we bumped over a dusty trail that led to the park, massive ramparts of the Ranthambore Fort rose behind us, almost an extension of the craggy hills they stood on. In front of us was a lake, with cupolas by the edge of the water. These former hunting grounds and pleasure pavilions of the maharajahs, venues of countless shikars in years past, are now part of the tiger reserve. 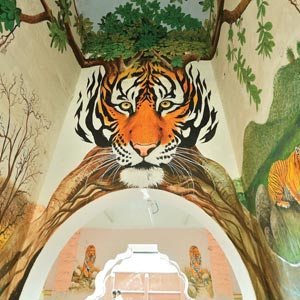 Driving through town, there was no doubt that the livelihood of the majority of the inhabitants depends on the tiger. Tiger, safari, and wildlife were the most common words on shopfronts. Murals of tigers and other animals, created by local artists, adorned the charming train station.

Inside the park now, our jeep inched along a dry creek bed. Dark rocks rose up in small cliffs around us and the roots of trees growing on them created a surreal image. They seemed to melt down the rock face, reminiscent of a Dali.

We rounded an outcrop and there we were, in the gaze of a tiger. She sat on a ledge close by, her tawny coat a few shades lighter than the rocks behind her. She was looking straight at us. After a few moments she turned her head and I felt the air rush out of my lungs. I had been holding my breath. 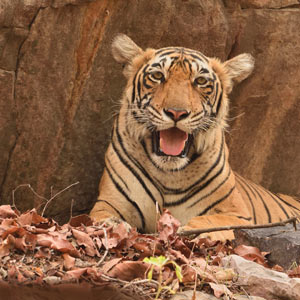 (Right) Lightning, hiding herself in the brush, after being injured by a porcupine quill.

“That’s Lightning,” our guide said. Each tiger has a nickname, earned through a characteristic marking or trait. We watched the tiger for long moments and then she yawned. Well versed in the ways of the tiger, our guide knew that a few yawns meant that she was ready to get up. Lightning stood and ambled off over a rocky bed which was too narrow for us to follow. But Nadeem saw where she was headed and soon we were in the midst of a group of jeeps, all gathered to watch Lightning as she emerged at the other end of the creek.

She stayed low, head just about the level of the rocks alongside the creek bed and eyes looking intently through a gap between the jeeps. She had spotted a prey. From our vantage point we could see the sambar grazing, oblivious to the threat close by. Lightning crouched along the line of the jeeps, using them as her cover till she was close enough to mount an attack. She charged at the deer but it proved to be too quick for her.

“That shows she’s still a young tiger. A more mature one would have known that it would not be able to generate enough speed in this heat,” said Nadeem. Lightning walked into a shallow pool to cool off. Watching the sambar run away, a silent cheer rose among us. We were on the side of the helpless prey. Had there been a kill, we would have recoiled at the sight and agreed wholeheartedly that nature was indeed red, in tooth and claw.

On a safari the next day, I found my heart going out to the predator. As we drove along dusty trails, Nadeem mentioned that park rangers had spotted Lightning. She was hurt and was hiding herself in the brush. A porcupine quill was embedded in her front paw. Had hunger driven her to attack a prey that can cause fatal injuries to tigers?

“Will she be alright?”

“If she manages to pull out the quill with her teeth.”

The mighty hunter of yesterday was a vulnerable creature now.

The quill was only one of the difficulties that Lightning would endure. Some months later, I read in a newspaper article, she had ventured into a village close to the park boundary and had fallen into a well. She was rescued by wildlife workers and brought back to the forest. But as the young tigers that share a forest area grow to full maturity, each will need its own hunting ground. Lightning and Arrowhead, part of the same litter, were in a contest to find out who would be able to hold on to the territory.

Back at the water hole, the sambar skirted the area in slow steps, constantly watching the tiger. This tiger was nicknamed Arrowhead. A water bottle was passed around in our jeep and I took a small sip. It felt like a heartless act, looking at the thirsty animals around us. Arrowhead showed no sign of getting out of the water, and the deer slowly moved away.

A peacock, showing off its brilliant plumage, as part of a courtship display.

Maybe this herd will be part of hundreds of animals that die each year during the dry season, but if these deer could stay alive for the next few days, they had a chance at survival. Monsoon winds were to reach the area soon, bringing with them a promise of rain. Forest creatures prepared for the change in season. Every now and then we saw a peacock unfurl its brilliant plumage and put on an elaborate courtship display.

Nadeem spotted a cast-off antler and pointed to the markings on it—teeth marks, made by male deer gnawing on it. Mating season was coming. The stags were in a hurry to grow their antlers, crucial in the contest to win mates. The antlers on the forest floor, discarded during the previous season, were a rich source of calcium and the stags were making the most of what was available.

Ours was one of the last safaris of the season; the park closes when the monsoons turn the trails into mud. With the rains, a new cycle of mating and breeding will begin, for both prey and predator.

And in the forest, a new cast of creatures will play out age-old roles.

Now based in the Atlanta area, Aruna Padmanabhan is a freelance who writes about her penchant for eco-tourism and nature.