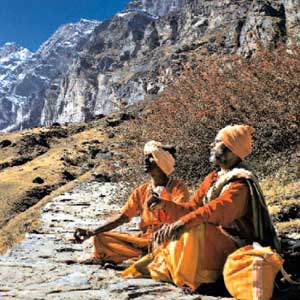 We made straight for Rishikesh and then six miles upstream to Shivpuri on the first day of our second leg. Rishikesh and Haridwar were known territories for me since 1960 when I was posted to Dehradun. I had been to the Shivanand Ashram while the great man was alive. In fact, I had escorted the then President of India, Babu Rajendra Prasad, to the ashram. But those were old days. This time we went river rafting in the evening. As always, it was a wonderful experience, especially since it was raining. We went past about five rapids and paddled with gusto. Across the river, the mountain was thickly wooded. There were lots of black buck there, and they belled in the early morning, warning the jungle about the movement of a leopard. In the evening we had seen a sudden streak through the grass, which must have been a leopard giving chase to his prey. We slept in tents by the Ganga. It was a wonderful start to the trip.

The next day was a long drive, past Tehri and Uttarkashi right up to Harsil. Uttarkashi was an exceptional experience, for the mountain that broods over the town was cracking up. Boulder after boulder plummeted down the hillside, each leaving a cloud of dust in its trail. The citizens of the town watched in terrified awe. The police had blocked the road and evacuated a part of the town. We were not sure how to get past, on our onward journey to Harsil. And oddly enough the leader decided we would just race through. And that is precisely what we did, our drivers never hesitating. We could have easily circled round without taking a risk, if we had just explored the area for a while.

We reached Harsil late in the evening in the pouring rain and early next morning left for Gangotri, which is at a height of 10,200 feet above sea level. Gangotri, as is well known, is the place where King Bhagirath is supposed to have worshipped Shiva for years on end in penance, and as his reward, the Ganges came down from heaven—a torrent that could have destroyed the planet had Shiva not caught it in his locks. A stone near the temple marks the spot where the Ganges landed. The shrine, a beautiful stone temple, was constructed by a Gurkha Commander, Amar Singh Thapa, in the eighteenth century.

Most glaciers in the Himalayas are wasting away, but the Gangotri glacier is receding at an even faster rate than the others. The real glacier at Gaumukh is about 20km from Gangotri. I had come to Uttarkashi in the mid-1960s, but my wife had clearly told me not to visit Gangotri without her, and as she was in Bombay, (now Mumbai) at that time, I didn’t go further north. Now, after her death, no such inhibitions shackled me.


Like any place of pilgrimage, Gangotri was teeming with sadhus in differing shades of saffron and ochre, with differing ash-markings on their foreheads, some carrying trishuls (tridents), and all of them with the regulatory kamandalam (water pot). Some of them chanted bhajans as they walked, most of them barefoot, to the accompaniment of their sistrums or chimtas, though some were even in sneakers and Hawai chappals. In cars one misses the delights of the pilgrim on foot or the trekker of old who had no option but to traverse bridle paths. Old travelers, like Marco Pallis who trekked to Gaumukh in the 1930s and also climbed the central Satopanth Peak, talk about white roses “massed along the path for miles,” the coral tree which “lends here and there a touch of fire,” and rhododendron petals which, at 7,000 feet, turned “the path into a crimson carpet.” Autumn had not touched the maple leaves with gold yet, when we were there in late September. But the skies were clear and the view of the Satopanth Peaks was unforgettable. “There are perfections about which the only eloquence is silence....”

Nearing Rudraprayag, the car in front of us suddenly came to a halt as a big panther crossed the road with majestic unconcern. We didn’t get to see him. We did not see enough of wildlife during the car trek except for herds of wild asses, an ibex peering at us from a cliff above and a pair of huge dark antelopes while we were proceeding to Gangtey in Bhutan.

We stayed the night in Rudraprayag. Knowing the Alaknanda Valley as I did (for three years I traversed it every second day), I could hardly believe what I saw. Formerly each padav (halting area) was a rundown eyesore with people living off the pilgrims proceeding to the two great dhams (pilgrim centres)— Badrinath and Kedarnath. Now we stayed at a flourishing rest house of the Garhwal Vikas Mandal, as good as any hotel. And the shops were bursting with all varieties of goods.

The next morning we pushed off to Badrinath, past Karan Prayag, where the Pindar runs into the Alaknanda, past Nand Prayag, where the Nandakini flows into Alaknanda, past Chamoli, Pipalkoti and Joshimath, where because of the lack of time I couldn’t visit my old house, though I saw it from above, the roof painted rust-red. We reached Badrinath in the afternoon. I think a look back is called for.

[The author is a poet and a short story writer. Source: Niyogi Books and India Perspectives.]