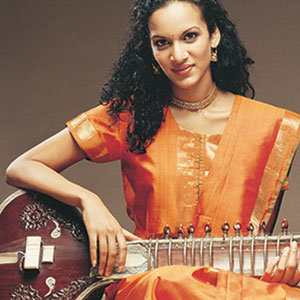 Her rise to prominence may have had something to do with her father, the veteran virtuoso Ravi Shankar, whose name is synonymous with sitar. But today she stands tall as the uncontested queen of this ethereal instrument. In an interview with Khabar, she talks about what it means to be the daughter of her illustrious father, about the electrification of sitars, and about her multiple creative pursuits.

True to the meaning of her name—“Grace” in Hebrew, and the “Favored One” in Hindi—Anoushka has gracefully ascended to success from a young age—as if she were a favored one. The accolades to her credit are varied: two Grammy nominations, the first woman to be nominated for a Grammy in the World Music category; author of a top-seller biographical book on her father, Bapi—Love of My Life; nomination for Best Supporting Actress in the Indian National Awards for her work in Dance Like a Man; India’s Ambassador to the United Nations World Food Programme, and more….

Trained by her legendary father, Ravi Shankar, Anoushka, to no one’s surprise, has become increasingly well known as a musician and a sitar player in particular.

Excerpts from a telephone interview:

How was it for you to be trained since the young age of nine by your father, who by then was perhaps the most legendary sitar player in the world?


Learning to play from him has been an incredible experience right from the beginning. Over the years the relationship has evolved in incredible ways, but even right at the beginning it was a bewitching thing, because what you’re interacting with is that level of artistry and musicianship. He and his playing and teaching were what turned me to this instrument. He is the most amazing and beautiful example of the instrument.

Was there any pressure in learning from this iconic musician, and how has it influenced your performance?
It influenced not just my performance but me and my playing and everything. I decided early on that I was not going to see it as a pressure. Some people tend to think that it’s a default but it’s an option. Because at the end of the day, he’s just my father. It can be one of many things—it can be a pressure, it can be a high standard, an expectation, an opportunity, a learning. It’s a mix of all these things and much more. There was an element when I was younger where I was quite scared about learning from him, because I was taking on something potentially very big. People were going to be watching, people were going to be judging. I just had to tell myself that I was going to try my best. But I learned to ignore that. Music and art are more than that. You can’t be playing to prove anything to anyone. You have to be playing from your soul, your heart. I just had to keep my motivations clear.

Tell us about some of the global influences of having been raised in diverse places. And what drew you to Spain and flamenco music?


I was born in England, and lived until I was about eleven in India, and then I moved to California. I lived there with my parents through my teenage years and a lot of my twenties as well. And now I live in London again.

Spain is somewhere that I’ve toured and performed and progressively grown to love more and more, a place where I would holiday and immerse myself in music, and so on.

It can’t be analyzed, because the reaction that I’ve always felt to Spain and its music is quite visceral and primal. I just feel a reaction in my gut and heart when I hear the music. Eventually it became something I wanted to explore. I’ve heard people say that about India. People who’ve never been here comment how they belong here, or connect to one country more than another. Spain has always been that for me. I’ve always felt at home there, picked up that language very easily, loved the lifestyle. But it was a very deep, intangible kind of reaction to the music, which then became something I learned more of and then I became fascinated to work with it. When I first started learning about flamenco and learned about its common links with our music, then there was a tangible reason to explore the commonalities between the musical styles.

From music to writing to acting, your creative expression is quite varied. Can you talk a bit about how that has come about?


Music, writing and acting are all ways to express oneself. I’ve been very lucky so far, whether as a musician or in anything I’ve explored, to be able to do things, to some extent, my way—making the music I want to make, not the music the producer forces me to make, to be able to choose a film for fun because I’m not looking to be an actor, not to have to do any film just because I needed a job. So I’ve been able to do things which sound honest to me and do things which enable me to explore myself, express myself. That’s what people have connected to. When people compliment my writing they say it’s very conversational, like someone writing to a friend. Similarly, they said in acting I was very natural and didn’t have any airs. So perhaps that’s what I go for. When it comes to modeling it doesn’t appeal to me because the nature of being a model is such that their identity can be completely changed, and they can take on whatever the vision requires. I often find photo shoots quite unpleasant…it’s an entirely different field. Some people do it brilliantly and I actually don’t. I can only do it when I’m comfortable and I feel I’m being myself.

The sitar being a strictly acoustic instrument, where do you think it is headed in the face of rampant digitization of music?

Are these pick-up microphones?


They are. I kind of feel sometimes that the developments in the Indian scene have come so fast and so dramatically that people are grappling with how to cope with all of it. There always has been and always will be room for every genre and every style to have its own unique space. An electric guitar has never ever replaced an acoustic guitar. Concert halls exist for orchestras, and clubs and bigger venues and stadiums exist for rock bands. There’s a way in which everyone exists and one doesn’t turn the other. In India at the moment that’s not the case. Fusion and all the crossover stuff that’s happening is threatening classical music and we all compete for the same radio space and the same TV space, the venues and the sponsors. Of course things like classical music end up suffering because by nature they have smaller numbers of audiences than more popular forms. So I end up becoming quite defensive about things like the acoustic sitar because they deserve protection and care and promotion, because they are so special, unique and have so much to offer.

Let’s talk about fusion. You have fusion duets and quartets, and have also had the opportunity to play with philharmonic orchestras. You’re still playing the sitar with a full-size orchestra. How do those parts feature in the arrangement?

I always have in my car the Ravi Shankar and Philip Glass album—it’s so out of the box.


Yeah. That collaboration in particular was incredibly special. If you analyze my father’s compositions you’ll find that generally he always works within the Indian classical framework even though he tends to experiment with different instrumentation, different musicians. The inspiration is always the Indian raga. Similarly with the concertos and symphonies, each movement is based within a raga or a ragamala, and it’s the orchestra that has to learn to play what is new for them.

Do you foresee doing a duet album with Norah Jones at some point?


Not necessarily. There has to be a really good reason. For both of us the idea of performing together almost feels so predictable and expected and commercial, and neither of us is into that really. At the same time we come from such different styles of music. I mean we enjoy each other’s music but don’t necessarily gravitate towards it for ourselves. That would have to change in order to want to make an album together.

You’ve also been a goodwill ambassador to the United Nations World Food Programme. Where else does you heart gravitate to?


One’s heart gravitates to so many places. Whenever I see something unjust, cruel or unfair I want to do something. But as a “public figure” one can’t lend one’s name to too many public causes. Otherwise it has no impact. So you have to choose, but I find it quite frustrating because I feel so helpless. So I tend to do lots of charity concerts. But that’s not the same as being an ambassador for a cause. But it’s just something one has to be judicious about. So I do what I can, really.

Can you tell us a bit about your current tour?


I’m particularly proud of this tour. It feels like my biggest success so far, of achieving some kind of cultural collaboration while also allowing my Indian tradition to be true to itself. So what people can expect is an event which is a mix of Indian and Spanish musicians that represent the two cultures. We have flamenco and Spanish percussion and Indian sitar, percussion and shehnai. I don’t like to simply replicate an album. So things have evolved and it’s a very dynamic show, which one can expect from flamenco—very rhythmic, very fast-paced for the most part. People who wouldn’t understand music would still enjoy it because it’s quite accessible, and people who understand either flamenco or Indian music might appreciate the way in which they have been brought together. It’s a crossover concept which carries a lot of classical content.

Very seldom do we find women soloists rise to the eminence that you have. How does it feel being one?


I feel very grateful, lucky and proud. I’ve grown up noticing that there aren’t many women doing what I do or anything similar even. I hope that younger girls or women who’ve come to my shows see this as an option, if they want to pursue this. In most societies in the world today for a woman the kind of options are fairly narrow in entertainment, even in music. So I hope I have some kind of impact.

[Anoushka Shankar performs on Saturday, March 24, with a group of Spanish musicians at the Rialto Center for the Arts, Georgia State University, combining the Indian sitar with the Spanish flamenco.]

[Viren Mayani is a senior music contributor at Khabar.]