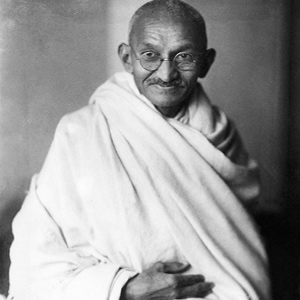 At a time when parochialism, cynicism, and violence are rising throughout the world, and when character and values are taking a nosedive, it can seem as if Gandhi and other Mahatmas (a phrase the “Great Soul” was disinclined to use) like him never trod on this earth. No wonder many see Mohandas Karamchand Gandhi as a relic of the past. But the reason his impact will continue through perpetuity is because he was, above all, a valiant warrior for truth, which is a timeless virtue.

Here is a perspective on Gandhi’s legacy, followed by a Q&A with Rajmohan Gandhi, a scholar and grandson of Gandhi. The conversation reveals some surprising insights about how the catalyst of post-colonial independence movements, despite his highest ideals, was a realist with feet firmly planted on earth.

Perhaps in an imagined past, we all had a shared definition of truth regardless of where we sat on the political pendulum; more likely, that common ground has always experienced tremors. But over the past couple of years, the trustworthiness of the earth beneath our feet has rarely felt like terra firma. One way forward for our children and grandchildren is through dialogue, the honest to and fro of what William Isaacs calls the “fire of conversation,” a “cornerstone of civic practice, inseparable from self-governing.”

Self-governing: there is that Gandhian ethos of swaraj: self-rule.

A Gandhian worldview nourishes us and our grandchildren with noble thoughts such as swaraj—and also the universal uplift of sarvodaya and the nonviolent ahimsa. The action-oriented truth-based philosophy of satyagraha (nonviolent resistance) was quite likely the reason why Time magazine considered Gandhi one of the most important persons of the 20th century.

Of course, the fact that so many world leaders have traced their activist peace lineage to Gandhi must have also affected the thinking of Time’s senior editors. This is a long list of prominent preachers and presidents, activists and actors, scientists and sense-makers. Apostles of peace as disparate as America’s Martin Luther King Jr., South Africa’s Nelson Mandela, and Tibet’s Dalai Lama have all been influenced by Gandhian nonviolent resistance. Indeed, former American President Barack Obama selected Gandhi as his dream dinner guest. Reflecting on his ideal dining companion’s penchant for fasting, Obama joked, “It would probably be a really small meal.”

No doubt those impacted by the Gandhian worldview would be part of a rather large roster. Tragically, the list of those who once led, or now lead, rather un-Gandhian lives runs long, long like the river of blood of all those who have died from violent acts since Gandhi began marching for peace.

Imagine how different the world would be—at least the private worlds of those who died at Jallianwala Bagh or in the bombing of Hiroshima or from the suicide attacks of 9/11—if world leaders had decided to embrace Gandhi’s messages of nonviolence, service, self-rule, and truth.

I’ve long been confused by the odd conflation of hero-worship of the Mahatma and dustbin-relegation of the message. I’ve read many books by and about Gandhi to try to understand this phenomenon of casting aside the philosophy of the 20th century’s most influential social and political leader.

After reading this article and the accompanying Q&A with Rajmohan Gandhi, each one of us has a choice:

• We can return to our busy lives, thinking that we don’t have time for all this Gandhigiri, unmoved by the foreboding sense that climate change is a climate crisis and that truth is on the back foot. As a result, the man who used truth-telling to stir a world to march against colonialism will walk alone, largely abandoned by so many of us.

• Or more optimistically, by being in timeless dialogue—better yet, in Satyalogue or Truthtalk we can keep the conversation alive and optimistically have faith that our children and our children’s children will be shaped by a Gandhian worldview and be the bridge to a world of a million Mahatmas walking together. 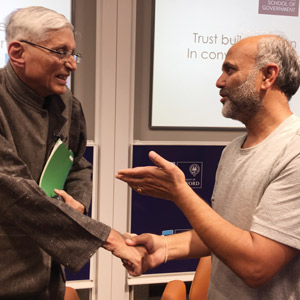 Excerpts from the author’s Q&A with Rajmohan Gandhi

What did your grandfather want for India, for an Asia that is now ascendant?
Let me begin by recalling the words he offered more than 71 years ago to Asian leaders assembled in Delhi’s Old Fort, or the Purana Qila. When Gandhi made those remarks in early April 1947, I was present as an eleven-year-old. Even if I understood his words at the time, I quickly forgot them. Yet the scene I glimpsed then, a Purana Qila dais occupied by Gandhi, Jawaharlal Nehru, Sarojini Naidu, and a very tall Badshah Khan, remains somewhere in my brain.

"I want you to go away with the thought that Asia has to conquer the West through love and truth. In this age of democracy, in this age of awakening of the poorest of the poor, you can redeliver this message with the greatest emphasis … you will complete the conquest of the West not through vengeance because you have been exploited, but with real understanding … This conquest will be loved by the West itself."

Your grandfather was a rather frank man. What would he make of the violence in Indian movies, the “honor killings” in Indian villages, what some are calling state-sponsored “incarceration” of Kashmiris?
Many in the world were greeting India’s independence as a triumph of nonviolence. However, Gandhi was aware of India’s hospitality to violence. In a prayer-meeting talk on 16 June 1947, he admitted that India had accepted his nonviolent satyagraha not because violence was a horror, but because satyagraha seemed more effective than violence against the Empire. Said Gandhi, “No one at the time (during the battles for swaraj) showed us how to make an atom bomb. Had we known how to make it, we would have considered annihilating the English with it.”

Well, that’s rather distressing. Would he have foreseen that some in India’s Parliament are actually celebrating Nathuram Godse, Gandhi ji’s assassin?
In their anger (Gandhi warned), Indians—the ‘we’ with whom he always identified himself, even when they went against him—might even have contemplated limitless violence with dissenters like Gandhi.

So how do we build trust when there are such fundamentally disparate viewpoints? We have something similar at work in the United States with the paralyzing mistrust between Republicans and Democrats.
Contrasting trust between communities, for which Gandhi strove, with bids by a government to win the trust of an individual or a community, poet-academic Manash Firaq Bhattacharjee observes that “trust, in the Gandhian sense, is an endearing and enduring state of confidence between people and communities.” … Bhattacharjee argues that for Muslims and Hindus to trust each other is more important in India than for either community to trust a government. Mutual trust among a people builds democracy. Distrusting your neighbor while trusting the government is the road to dictatorship.

What do you think Gandhi would make of the American situation which has a group of four young congresswomen of color (“The Squad”) pushing back on what they are calling the racist policies of one older, white President (Donald Trump)?
In Gandhi’s swaraj, the weakest Indian had the right to dissent. In his view, bullies were swaraj’s annihilators.

There are times that I seek refuge in God from the madness of the world. I pray at the mandir in our home, or at the local Hindu temple. This gives me a deep sense of peace, but I wonder if it is really just a form of escape. What was Gandhi’s take on prayers?
I think it is impossible to separate Gandhi, the public campaigner, from the inner Mohandas. We cannot separate Gandhi, the leader of millions, from the personal Gandhi who prayed, often from a position of helplessness, for strength and wisdom from God.

“A leader of millions.” I do wonder if Gandhi ji would think of himself that way or find himself reflected in Rabindranath Tagore’s poem, “Ekla Cholo Re” (“Walk Alone”).
Gandhi was asked by a young man from Gujarat … whether he expected a following for civil disobedience in India. Replied Gandhi,

"I am not very much worried about securing a large following. That will come in due course. But I do anticipate that a time may come when my large following may throw me overboard on account of my strict adhesion to my principles—and it may be that I shall almost be turned out on the streets and have to beg for a piece of bread from door to door."

Rajesh C. Oza, Ph.D., who for many years wrote Khabar’s “Satyalogue” column, is on the Planning Committee for Stanford’s Gandhi-King Global Initiative. He can be reached at www.satyalogue.com where he has launched his new book on Gandhian thinking.