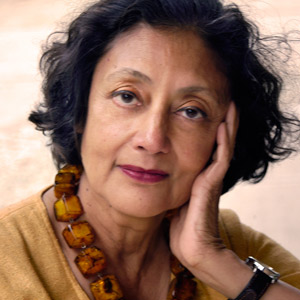 Bharati Mukherjee (Left) was one of the pioneering Indian writers who wrote about hyphenated lives, and yet didn’t succumb to the hyphen herself. (Photo: Chip Cooper)

The celebrated author was one of the first to assert her identity as a writer unshackled from her roots—not so much as an act of denial of her roots, but as a bold statement of not being boxed in by them.

“During the twenty years I’ve been in California, an immigrant fog of South Asians has crept into America.”

That’s writer Bharati Mukherjee reading from her novel The Tree Bride. Mukherjee was one of the earliest chroniclers of that story of the immigrant fog changing America.

I knew her when she lived in San Francisco and taught at UC Berkeley. Mukherjee was elegant in her sari with a glass of red wine, but you would be a fool to not see the steel behind those Kolkata convent school manners. She had led a sheltered life in Kolkata but had vivid memories of India around the time of Independence. “I had grown up as a very small girl watching funeral processions of young people killed during the freedom fighting riots.”

She resented the colonial attitudes of the Irish nuns at her Catholic school. And she was relieved she came to America, not England, the old colonial power. “For me, coming to America rather than Britain was a sense of relief, was great freedom. The uncoupling of English from colonial history was very, very liberating.”

It was liberating in other ways, too. “When I am writing fiction I can only think in English or American English. … probably because I can be free to be any character I want in English, whereas I am stuck, constrained, restrained to be the good, well brought up Bengali woman if I write in Bengali.”

She came to America at a time when that immigrant fog had not yet crept in. “When I came in the early 60s, there were very few Indians who were immigrants. We all came as foreign students. The numbers were so small, even in places like Manhattan, that you would smile at another Indian if you walked by one.”

She wrote those first stories of these new Americans in books like The Middleman and Other Stories which won the National Book Critics Circle Award way back in 1988. In Tiger’s Daughter, an Indian woman feels out of place in India after years in America. In her famous novel Jasmine, Jyoti becomes Jasmine becomes Jane, stripping away layers of identity with each name as she journeys from India to Iowa.

“By the time I came to write Jasmine in the late 80s, Indian immigrants were far more visible as a community, but the rhetoric about immigration was still stuck in [polarities of] that old “melting pot” vs. rejection of American culture.” And that meant either you had to reject wholly the culture you had come from or you became overly American. “The melting pot assumed a one-way transformation,” she said, “an assimilation where all the non-Anglos were expected to scrub down.”


She was interested in the two-way process where America changed her even as she changed America. “Each side casts shadow on the other.” This two-way dance preoccupied her later books like The Tree Bride. “It tabulates the regrets and limitedness of the concept of free will that had been embraced by some of my earlier characters, like Jasmine. This may make some Americans unhappy, but it’s understanding the dance of free will and destiny.”

And then to her surprise she went to India and saw a new generation of Americanized Indians in India. “I was amazed at the number of Silicon Valley families who had settled in towns like Bangalore and set up a kind of hybrid Indo-American life … obviously very successful, with young very American-sounding, American-acting children and the McMansions they have built.”

She wrote about these hyphenated lives but rejected the hyphen for herself. She wanted to be an American writer, she said, not an Asian-American one, relegated to a particular bookshelf. “My rejection of hyphenation has been called race treachery,” she said, “but it is really a demand that America deliver the promises of its dream to all its citizens equally.” The writer Pico Iyer said, “Long before most of the culture was thinking about it, she was seeing how America could become a new kind of nation, by drawing from every corner of the world and bringing them all into new combinations.”

But her rejection of the hyphen was not a rejection of her roots. In one of her last books, Mukherjee’s heroine Tara turns on the lights in her San Francisco home at dusk because her grandmother in India once told her the spirits come out at that time. “What is there in science at this moment to tell me that spirits don’t exist? So I’m turning on the lights even more vigorously these days.”

Bharati Mukherjee is gone, but she left the light on for many of us.

Sandip Roy is Contributing Editor at HuffPost India. This article first appeared as an audio program on KALW, the local public radio in San Francisco, California.