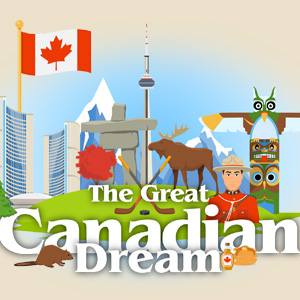 Is it “Hello, Canada” and “Goodbye, America” in the Age of Trump? It certainly seems that way for skilled expatriates and would-be immigrants, many of whom are now apprehensive about pursuing their dreams and aspirations in the U.S. Meanwhile, Canada, the other land of immigrants, has become a more welcoming destination for these ambitious students, techies, and entrepreneurs.

Indian-Americans, like other immigrants, cherish the values that drew them to the U.S., and many of them know those values are worth fighting for when they’re under threat. The rise of Trumpism, in other words, presents a dire challenge that must be overcome. But the priorities of young expatriates and would-be immigrants are different, understandably. They’re focused, above all, on gaining an economic foothold and will naturally look to countries that are more open and welcoming. These days, it seems, no nation is more accepting of outsiders than Canada.

When Colorado State University graduate Devanshi Kukadia had to pick a Master’s program, it turned out to be a pretty straightforward choice. Currently enrolled in the Environmental Sciences program at the University of Toronto, Devanshi is glad she did her research and decided to pursue her education in the immigrant-friendly Great White North. “I looked at the statistics of Canadian population and found that there were millions of immigrants. Also I was tracking the news before deciding and found that Canada was open to Syrian refugees. In fact, it was while I was applying that U.S. President Donald Trump imposed a travel ban on people from seven countries. On the other hand, Canadian universities were welcoming students from all those countries and giving them some concessions on their admission requirements temporarily. This made a huge difference and gave me a positive impression about the university, and I felt a pride in selecting and pursuing my education in such an institution,” she says.

Devanshi is not alone. Students, entrepreneurs, and investors are looking at America’s northern neighbor with new eyes. For decades, the U.S. has been the destination for a better life, better opportunities, and more access to resources, the place where one could reach one’s highest potential. Not any more, say trendspotters. Are we witnessing the early days of the Canadian Dream?

The people can be divided into five groups. The first are American, predominantly Liberals, who are simply ideologically opposed to Trump and are generally fed up with the political situation in the United States. The second are employees of multinational corporations that are now concerned about their workers being denied entry to the United States. The third are people who are already in Canada but are worried about the ramifications of NAFTA being renegotiated or cancelled. The fourth are prospective students, primarily from countries that are predominantly Muslim, who are worried that immigration options will be limited for them when they graduate. The fifth are people who have precarious or no status in the United States,” explains Steven Meurrens, a partner at Vancouver-based law firm, Larlee Rosenberg, Barristers & Solicitors.

The good life
Canadian social entrepreneur and writer, Scott Gilmore made a strong case for the Canadian dream in a recent interview with CNN’s Fareed Zakaria. “No matter how you cut the American dream or no matter how you describe the American dream, whether it's life, liberty, and the pursuit of happiness or a car, a job, and a degree, it's now become easier in Canada,” he said. He made a compelling case for Canada in his essay, “The American Dream has moved to Canada” which was published in leading Canadian magazine, Maclean’s in February 2017.

Gilmore has elaborated on what makes Canada such a hotspot for immigration—from Canadians being more likely to be able to find employment to becoming homeowners to being ranked by the World Economic Forum as having the sixth happiest people in the world, (the U.S. is ranked 13th on that list) the dream certainly seems like reality. Canada is also taking the lead in several sectors, significantly the tech sector in recent years with a diverse bunch of individuals and companies that are taking advantage of the diversity and open culture that is the hallmark of Canadian business practices. No wonder the country has done well for itself in the first quarter of 2017—Canada's economy expanded at an annual pace of nearly 4 per cent in the first quarter, more than three times the growth seen in the U.S. in the same period, according to a report by the Canadian Broadcasting Corporation (CBC).

Open for business
Some Canadian immigrants aren’t so convinced that this is a new wave. “Toronto and Canada in general have always been an incredible place for innovation, entrepreneurship, and collaborations. People are just paying more attention now because of the politi- cal climate in our neighboring country. In order to succeed in North America, you must collaborate with talented individuals on great ideas, regardless of their religious beliefs or where they were born. And, as Canadians, our commitment to fostering an open and inclusive society has been our strength,” says Jordanian born Abdullah Snobar, executive director of the DMZ, the tech incubator at the reputed Ryerson University in Toronto.

“We see and experience this every day with our diverse community at DMZ and in the Canadian tech sector. And as a result, we’ve become a more innovative country. And, no matter where you stand on this argument, it’s a fact that diversity is at the core of economic growth,” he adds, noting that many of the founders and employees at his tech incubator come from countries targeted by Donald Trump’s infamous travel ban. In response to the U.S. travel ban, an open letter was signed at the time, by more than 150 technology companies in Canada—including Shopify, Google Canada, Hootsuite, Kickstarter, and BlackBerry among others—declaring solidarity with those affected by the ban.

The DMZ itself offered free work space with access to their resources for those who had been affected by this order and even offered support from their legal counsel-in-residence, to help them with business issues as they relate to the U.S. (e.g., managing a U.S. subsidiary, employee contracts, and cross- border investment).

Trouble in America
Though immigrants and expats still look to the U.S. favorably, the country may have lost some of its sheen, thanks to the prevailing unpredictable political scenario. According to a recent report by Expat Insider, 2017 has seen a marked drop in expat arrivals following a year of volatile politics and continued policy changes. Does this mean that the U.S. is now less appealing to expats? Sliding 17 places in the overall country ranking to 43rd out of 65, the U.S. received a particularly damning score from expats regarding politics. Just 36 percent of those surveyed rate the political stability of the USA positively, 20 percentage points lower than the global average (56 percent) and a significant change from 2016, when 68 percent still rated this factor favorably. In stark contrast, the same report reveals that expats come to Canada (and more than 45 percent are considering staying forever) for the great quality of life, friendly Canadians, good career prospects, and are particularly happy with their personal safety as well as peacefulness, which 94 percent rate positively.

For all these straws blowing in the wind, not everyone feels the same way. Rochak Dayal (name changed) is with one of the top consulting firms in North America and has a mixed view, having worked in both countries. "Though I love living in Toronto where the work environment is more inclusive and there is more work-life balance, there's no denying that the U.S. has a bigger economy, businesses are more open to risk, and there is more capital to spend. Let's not forget that salaries are higher, taxes are generally low in most states, and cost of living and housing are cheaper, too, in the U.S. The American dream is very much alive; I think it's the rhetoric from the top leadership in the U.S. that may be creating a lot of negative buzz about working and living in America, especially in these times where social media is a big influencer. I'd work there if I have the right opportunity," he says.

Baisakhi Roy is a Toronto-based writer and online editor who loves to write about ordinary people and their extraordinary stories. She also loves doing Legos with her 9-year-old daughter.