COVID-19  In-depth info for Indians in Atlanta/Georgia. Click here
Home > Magazine > Features > Voices : Why We Must Stay Vigilant During the Pandemic

Voices : Why We Must Stay Vigilant During the Pandemic 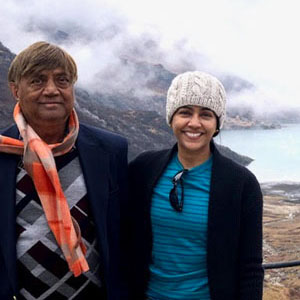 Indian traditional values encourage us to meet each other and attend weddings and functions. But this is one time we can come together by not coming together, says HINA PATEL, who shares the heartbreaking loss of her father due to Covid-19.

In November 2020, I lost my father to coronavirus. In my mind, it was preventable, but I try to convince myself that it was his fate, in order to cope with this devastating loss.

It all started in October after my mom and dad attended the funeral of my uncle in Florida, who had died from a non-Covid related illness. As with many Indian families, the duty of family obligation outweighed the risk for my parents. It took one person, who was unknowingly coronavirus positive, to come to my uncle’s house, and inadvertently pass the virus on. What ensued in the weeks after would tragically affect multiple
households.

As my mother returned from my uncle’s house, the following four weeks saw the spread of the virus to our extended family dispersed over four different states. My own family had three members who fell sick: my mother, my father, and my brother. Both my father and my brother had to be hospitalized. It was heart wrenching for us to have both father and son in the same hospital, at the same time, for the same dreaded illness. We kept it from my father that my brother, his son, was only a few doors down from him during his hospitalization.

What has left my family devastated and heartbroken is my dad’s course in the hospital. We always thought my dad would come home after his initial hospitalization. Yes, he had a couple of co-morbidities (diabetes and heart disease), but they were well controlled. So, he should home soon, right? As it turned out, we were wrong.

My father spent a total of three-and-a-half weeks in the hospital including two weeks in the Covid-19 Unit at the hospital. During that entire time, our only way to talk to dad was through FaceTime. No one was allowed to visit patients during the pandemic. He admitted to me and my siblings multiple times that he was scared. He said he wanted to come home. His fear and loneliness will forever haunt us.

Unfortunately, his hospital course would eventually include being put on a ventilator in the ICU, and that’s when even these FaceTime conversations stopped. The last time I had a chance to speak to him was on a day when he could barely open his eyes. I am a former clinical pharmacist who had worked in an ICU for over seven years. I knew exactly what was going on. I knew that with every passing day, my dad’s chance of ever coming home healthy was slipping away. Over the next ten days, I prayed to God like I had never prayed before.

Three days before my dad passed away, we were told that my dad was probably never going to wake up. That’s when we had to make the gut-wrenching decision to stop all care. It was the most traumatic decision to make. Over the course of the next three days, we set up video conference calls for friends and family members to say their final goodbyes. My dad will probably never know what his siblings, family members, or his good friends said to him. On the day of his death, we were allowed to see my dad individually before they stopped everything. We only got fifteen minutes per person. Fifteen minutes! How do you say goodbye to a parent in fifteen minutes?

To add to this tragedy, we also lost my aunt to Covid. My brother has been out of the hospital for six weeks now but is still experiencing hand tremors and remains weak. My mother was discharged almost two months ago, but is still unable to move around for prolonged periods. The experience of life without my dad, to whom she was married to for 52 years, still hasn’t set in for her. He was her world.

Behind every single one of the 300,000 Covid deaths in the U.S. and hundreds of thousands more globally, there are stories very similar to mine.

But it does not have to be this way. It’s time for all of us to take responsibility and do our part to prevent further deaths and to not become a statistic. Even though the vaccine is finally becoming available, that doesn’t mean we should let our guard down.

Despite warnings from health experts worldwide, many people continue to gather in large groups. There are weddings and ceremonies still being held. People seem to have thrown all care to the wind. Next time you are organizing an event, think hard about whether you want to carry the guilt of someone’s death on your shoulders.

Don’t put friends and family in a position that they feel they are obligated to attend. You don’t want to put yourself and those around you at risk by attending large gathering which could turn into super-spreader event. It’s up to us as a community to protect ourselves because no one else will.

The Indian community is such a tight-knit group, and we are always taking the extra step to help each other out. So let’s continue with that tradition and do our part by wearing a mask, social distancing, and practicing good hand hygiene. We can come together as a community by not coming together till the pandemic is behind us.

Hina Patel is a clinical pharmacist residing in Atlanta, Georgia. She can be followed on Twitter at @hinapatelRx. Her CNN interview about her father’s demise is at https://vimeo.com/486528141/632acaf49a and the BBC radio interview is at https://www.bbc.co.uk/sounds/play/p08zz85w.