COVID-19  In-depth info for Indians in Atlanta/Georgia. Click here
Home > Magazine > Features > Wanderings: When the Journey Is Our Destination

Wanderings: When the Journey Is Our Destination 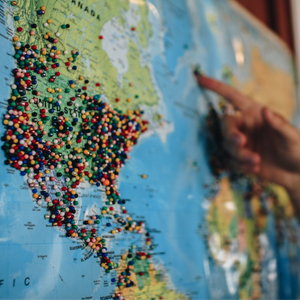 What does it mean to be a traveler today, and will travel ever be the same for us again?

The highlight of the spare room in our home is a map of the world. The rectangular 5” x 3” laminated sheet attached to the wall with heavy-duty double-sided tape is a standard representation—irregular land masses interrupting various shades of blue that cover two-thirds of the earth’s surface. What makes this particular map special are the colorful stickers that dot various locations over its shiny surface. Little circles in four colors, one for each member of the family, mark the cities we have visited. While the map remained unchanged over the years, the number of dots increased as our family, individually and collectively, stepped into new countries and continents.

Until the year of the pandemic.

After a memorable five-day safari in Tanzania in August 2019, our family had joked that it would be difficult to top that holiday. The husband had successfully climbed Mount Kilimanjaro, the girls and I had enjoyed our seaside stay in Zanzibar, and all of us had loved chasing the “big 5” across the Serengeti.

Little did we know that the challenge of 2020 would not lie in visiting an exotic country but within the borders of the tiny one in which we lived. As the worldwide tally of infections soared, we would give thanks that we were relatively safe in Singapore and still had the freedom to step out of our homes. After months of staying put, I studied the map which had no new dots in 2020. Bhutan had been on my travel list. Jordan too. Instead of frequent flyer miles, we had racked up a record of sorts—twelve months without a single visit to Changi airport.

Despite the ban on leisure travel, I felt a constant tug. But the lure of flying free was balanced by a fear of the mandatory 14-day quarantine rules that we enforced for returning residents. I feared being assigned a windowless room without access to sunlight or other humans. The prospect seemed to be the opposite of the escape I was seeking, and the price, in terms of my overall well-being and sanity, too high, notwithstanding the cost of the endeavor itself.

I looked around the other walls of the smallest but most versatile room in our home. On most days I used it as a prayer room in the mornings and a yoga studio in the evenings. In the past years, it has served as a guest bedroom, with the futon providing a spare bed for visitors. The pandemic had caused this space to be transformed into a telecon room for my husband and me, a classroom for our school going daughter, and a secluded room for virtual exams for our college-going daughter in her final semester.

How were my friends who were prolific travelers dealing with the limitations imposed by their respective countries? A friend in India was looking forward to domestic travel in the near future. A Singaporean colleague, although disappointed about the cancellation of her highly-anticipated trip to Antarctica, seemed happy to have received a refund. Another friend who lived in Australia and had traveled to 62 countries, including Cuba and Kenya, was making do with what was possible.

“What was the most exciting place you have been to lately?” I asked.

“The Vipassana meditation center,” she replied.

Huh? Could an inward journey be as interesting as an outward one?

A well-known ambassador of the ten-day silent Vipassana meditation retreat, Yuval Noah Harari, author of books such as Sapiens and Homo Deus, credits his phenomenal output to his meditation practice. For the type of books he has written, the necessary qualities—concentration, clarity, focus—arise from his ability to travel inward. Bill Gates’ well-known Think Week, an annual solo holiday in a quiet cabin in the Pacific Northwest, helps him remain disconnected yet allows him to tap into creative ideas.

However, the most convincing ambassador for traveling within is Pico Iyer, the celebrated travel writer. In The Art of Stillness, Iyer writes about his unusual discovery in a catholic hermitage in California almost thirty years ago: “In an age of speed, I began to think, nothing could be more invigorating than going slow. In an age of distraction, nothing can feel more luxurious than paying attention. And in an age of constant movement, nothing is more urgent than sitting still.” 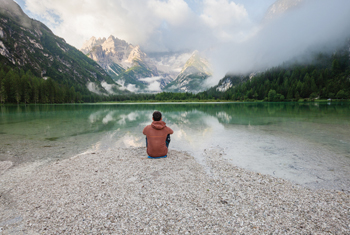 While his words sounded wonderful in theory, I wasn’t sure I was ready to voluntarily sign up for such a solitary trip. Travel, to me, was a way of slipping into a prolonged state of acute awareness simply by virtue of being in an unfamiliar environment.

Just as I was beginning to think that Covid-19 had put a complete stop on travel, my husband came up with something interesting. “Look at this,” he said with a flourish, thrusting the newspaper with its full page ad for a cruise to nowhere. A seacation.

Was it a new word coined in the Covid-19 era?

Like a staycation, where you stay in a hotel in your own city, a seacation involves boarding a ship with no particular destination in mind. In any other year, I would have scoffed at such a suggestion.

“Let’s go,” I said, surprising myself by my swift response.

A view of the endless horizon sounded like a welcome break from the familiar sights of high-rise buildings and tropical foliage that had been my only view for months.

I would not set foot in a new country, but I would get a chance to verify the truth behind the cliché—the journey is the destination.

Although this trip would not add stickers to my world map, this, too, would be an adventure.