COVID-19  In-depth info for Indians in Atlanta/Georgia. Click here
Home > Magazine > Features > We Are All Arizona

We Are All Arizona 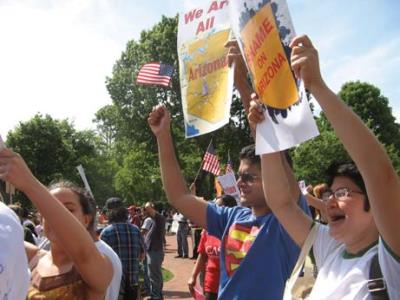 The new Arizona law (SB 1070) allows Arizona’s police officers to question people about their immigration status based on a “reasonable suspicion” that they may not be legal immigrants in this country, and makes the failure to carry immigration documents a crime. The law’s goal is to identify and remove those individuals who do not have legal immigration status. The law is troubling for many reasons, and raises questions about how we treat immigrants in the United States.

South Asian Americans Leading Together (SAALT), where I work, and other organizations that work with South Asian immigrants are concerned that laws like SB 1070 will lead to the targeting of certain communities, including people from India, Pakistan, Bangladesh, Nepal, and Sri Lanka.

What concerns us the most is how police officers will decide whom they should question on the streets of Phoenix, Tucson and other cities in Arizona. How will cops know who might be legal and who might not be? Will they only question people who look like they are from certain countries or speak with accents? Is it more likely that cops will stop individuals who are speaking to their family members in a different language, or who are wearing saris or salwars, or even turbans and hijabs as part of their religious faiths?

The bottom line is that you cannot tell who might be legal and who might not be. Relying on factors such as someone’s accent, skin color, or attire can be dangerous—it means that U.S. citizens and green card holders might get questioned by police, or that the only people who ever get stopped are those who look brown, especially Latinos and Asians. It is quite unlikely that police officers will stop and question someone who is white and English-proficient (even though there are many European and Canadian immigrants who are out of status in this country), rather than someone who is brown and does not speak English.

Why is a policy like this wrong? Regardless of what you think about the rights of undocumented immigrants, it is clearly wrong to target people based on characteristics that they cannot control—such as their national origin, skin color, accent, and religious faith—in order to address the issue of undocumented immigration. And that is just what laws like SB 1070 would do.

In addition to the impact on Latino and Asian communities, policies such as the one in Arizona also endanger public safety. Many immigrants might be unwilling to report crimes or to step forward as witnesses to crimes that are being investigated. In fact, in some parts of Georgia, local cops are already enforcing immigration law by reporting individuals who are not legal to immigration authorities. As a result of this new role assumed by cops, many domestic violence survivors are reluctant to approach cops for assistance for fear that they or family members might be questioned about their immigration status, according to groups like Raksha, a Georgia-based organization fighting domestic violence.

Unfortunately, the Arizona policy might not be limited to just one state. Georgia gubernatorial candidate Nathan Deal has stated he would support a law similar to Arizona SB 1070. And, many other states around the country are already considering similar laws despite the fact that the Arizona policy has been roundly criticized. In fact, the Arizona law’s constitutionality is going to be tested in the near future. Advocacy groups, as well as the U.S. Department of Justice, are considering legal challenges to the law.

What are some alternatives to prevent laws like SB 1070 in Arizona and other states? As a country, we need to address the fact that our current immigration system is broken. We must enact fair and humane reforms to fix the problems within the system. These solutions need to include eliminating the family and employment visa backlogs and quotas; enabling skilled and unskilled workers to freely access the marketplace of jobs; providing a path for legalization of the 14 million undocumented people in this country; and ensuring that people in detention proceedings have basic rights.

It’s up to Congress and the White House to put these reforms into place so that states and local law enforcement do not take immigration matters into their own hands in a way that compromises public safety and strips individuals of constitutional rights. And, if the political will does not emerge, it is up to people like us—immigrants and children of immigrants—to demand change from those in power.

Deepa Iyer is Executive Director of South Asian Americans Leading Together (SAALT), a national, nonpartisan, nonprofit organization that reflects the perspectives of South Asian individuals and organizations to build a more just and equitable society. Learn more at www.saalt.org.