When Narendra Modi Was in Atlanta

Compiled and reported by Mahadev Desai. 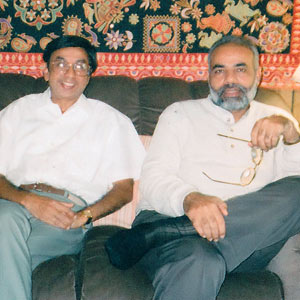 While many are aware of how the U.S. denied a visa to Narendra Modi in 2005, it is less known that prior to that infamous incident, Modi had already travelled to the U.S.—thrice.

In 1997, during Modi’s second visit to the States, Atlanta resident Niranjan Jain had the privilege of hosting the man who would go on to become India’s 15th Prime Minister. During those days, Modi was one of the four National Secretaries of the Bharatiya Janata Party (BJP). He was an up-and-coming functionary within his political party, but by no means well-known. Remembering the two-day visit, Jain says, “Since my wife and son were in India, I was alone at the time. I cooked some vegetarian dishes for him. I never imagined he would become the Prime Minister of India one day. It was a rare honour to have hosted him.” 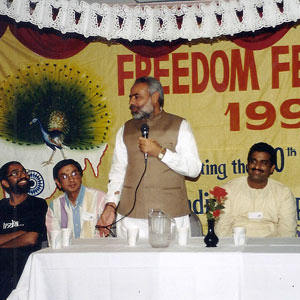 Speaking at the event hosted by Gokul Kunnath (who is seated, far right).

Interestingly enough, when Modi was his guest, Jain had no prior acquaintance with him. How then did he end up hosting him? For that, the credit goes to Gokul Kunnath, founder of the Hindu Student Council (HSC) in the U.S., the first campus-based Hindu organization founded outside of India. During his days in India, Kunnath was also a volunteer with the Rashtriya Swayamsevak Sangh (RSS). He had been acquainted with Modi since 1987 when he first met the latter in New Delhi at an Intellectual’s Meet organized by the RSS. “My first impression of him was that he was a person who thought outside the box. I could see a restless mind and a sharp intellect that were miles ahead of his peers,” said Kunnath of Modi, who was seated next to him at the event, and who, at the time, was the organizing secretary of the Gujarat unit of the BJP.

Since 1997 was the 50th year of India’s independence, HSC decided to celebrate the occasion in a big way all across the U.S. and Canada under the banner of “Freedom Festival.” As part of the celebrations, HSC organized seminars, conferences, camps, and an exhibition of India’s history and contributions. Kunnath, who was well connected with the leadership of RSS and BJP, and had managed to invite their top brass (including former Prime Minister Atal Bihari Vajpayee) to Atlanta, extended an invitation to Narendra Modi to attend the Freedom Festival as a special guest. “His patriotism and love for the ideals of Swami Vivekananda was unparalleled. He was also very down to earth and close to the RSS culture in thought and action. As an RSS Swayamsevak myself, I felt at home in his company,” says Kunnath, expounding on his choice of Modi as the special guest for the special event.

Whenever he had such guests in town, Kunnath sought to make productive connections for the guests with like-minded locals. Since Niranjan Jain had just accepted the responsibility of being the President of Vishwa Hindu Parishad’s Atlanta Chapter, he asked Jain if he would like to host Modi at his house.

During his short visit, Modi made several stops as a visiting official. At the Gurudwara in Stone Mountain, he made a speech that many found electrifying. The Greater Atlanta Vedic Temple in Lilburn and the BAPS Swaminarayan Temple, which in those days was in Clarkston, were a couple more of the stops in his itinerary. 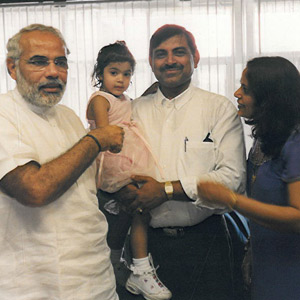 Dr. Vasudev Patel, President of Gujarati Samaj of Atlanta and coordinator of Overseas Friends of the BJP, is another Atlantan with ties to Prime Minister Modi. His personal acquaintance with him began in 1980 when Dr. Patel attended an RSS summer camp, where Modi, a few years senior to him, was a teacher. Thanks to Dr. Patel’s father, who was a state leader of the Jan Sangh in Gujarat, he had several opportunities to meet Modi, who, in those days, was just another cog in the large organization. However, there was something about him that was hard to miss. “I was impressed with his organizing skill, oratory, and poetry, all of which were evident even in those early days,” says Dr. Patel.The doctor, a scientist in the field of forensic toxicology, likes to quip that Modi may be the only Prime Minister of India who may have traveled in the subway trains of New York City. During Modi’s first visit to the U.S. in 1993, Dr. Patel—who at that time lived in New York—had traveled with him on these trains, and now cherishes those memories of having spent one-on-one time with someone who would go on to become a political leader of staggering proportions.

Dr. Patel is appreciative that Modi’s success had not affected his accessibility. In 2003, when Modi was the embroiled Chief Minister of Gujarat, Dr. Patel called his office during one of his visits to India, seeking an appointment for a social visit. To his surprise, he received a call back from his office in 30 minutes confirming a time for the visit.

The high regard that Dr. Patel holds for Modi led to his taking time off from work, like many other NRIs, to travel to India and campaign for Modi. In the six weeks that he campaigned for his hero, Patel addressed over 80 small and large town meetings in Gujarat and Uttar Pradesh.

Not surprisingly, Patel believes that India has in Narendra Modi its best Prime Minister thus far.