Whistleblowers: A Tradition of Moral Courage 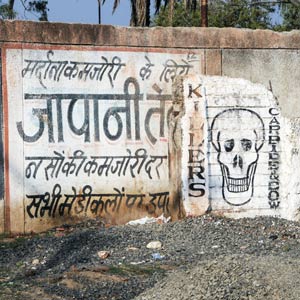 Graffiti (left) on the wall of the site of the Union Carbide plant in Bhopal describes “Carbide” and “Dow” as “Killers.” But where was a whistleblower when one was needed the most—before the tragic incident in 1984?

From Ralph Nader to the men involved in exposing the Watergate affair during the presidency of Richard Nixon, America has steadfastly produced people of conscience who refused to stand by and do nothing in the face of wrongdoing.

All that is necessary for the triumph of evil is that good men do nothing. —Edmund Burke

The whistle never blew in the neighborhood I wished to visit, and death came quickly as a result. Some say a thousand innocent people died that night, others say, no, the number is closer to two thousand. Many of those who did not die that night may wish they had, for today their bodies are crippled, a dis-tressing number of their children suffer from birth defects, and the money that could have been used to ease their pain is dammed. Take me to this place for I wish to see the ruins, I asked five different drivers, but all save the last one said no.

The place is the Union Carbide Plant in Bhopal, India.

No “Whistleblower” came forth to scream that the pipes are rusting and the controls are broken and plant management is failing. This last line of defense—the brave soul who risks his everything to challenge a failing institution—never appeared and the gates of hell exploded.

There is nothing to see at the old Carbide plant, the last driver said, but I said take me there anyway.

What would I have done if I had been a plant maintenance employee in Bhopal? Would I have had the moral courage to step forward? Or would I have been satisfied to escalate a problem to my boss, and think, I’ve done my job? 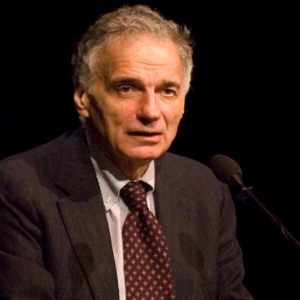 Ralph Nader, an American icon when it comes to whistleblowing.

In the 1950s, the decade that I was born, trust in our American institutions was high. Sure, we had the occasional scandal, but nothing like the decades that followed. It is for that reason that we will begin our narrative in the 1960s, the decade when my generation came of age, and the time when Ralph Nader, a person who is often considered the “father” of the Whistleblowers, achieved national prominence.

In 1965, Nader, a lawyer and eventual consumer advocate, published the bestselling book, Unsafe at Any Speed: The Designed-In Dangers of the American Automobile, a title completely contrary to the 1950s pop mantra, “What is good for GM (General Motors) is good for the country.” Nader makes the case that car manufacturers produce products with an eye to maximizing profit, at the cost of safety. Cars of the era, for example, had hard metal dashes and no seatbelts.

GM responded, quickly. According to Nader, GM tried to destroy his image and to silence him. They

“(1) conducted a series of interviews with acquaintances of the plaintiff, 'questioning them about, and casting aspersions upon [his] political, social, racial and religious views; his integrity; his sexual proclivities and inclinations; and his personal habits'; (2) kept him under surveillance in public places for an unreasonable length of time; (3) caused him to be accosted by girls for the purpose of entrapping him into illicit relationships; (4) made threatening, harassing and obnoxious telephone calls to him; (5) tapped his telephone and eavesdropped, by means of mechanical and electronic equipment, on his private conversations with others; and (6) conducted a 'continuing' and harassing investigation of him."

On March 22, 1966, GM President James Roche was forced to appear before a United States Senate subcommittee, and to apologize to Nader for the company's campaign of harassment and intimidation. Nader later successfully sued GM for excessive invasion of privacy.

Cars with metal dashes and no seatbelts were simply “the standard” during my childhood. If my parents had any misgivings about traveling in these ill-equipped “death traps,” they kept the matter to themselves. But in matters related to cigarettes, they were very vocal. “Don’t smoke,” they warned, “we think it is bad for your health.” It took two full decades, but the truth finally came out.

In 1988, one of the most celebrated Whistleblowers in American history, Dr. Jeffrey Wingard accepted a high level job at the world’s second largest tobacco company, Brown & Williamson. Just five years later, he was fired for protesting the company’s continued efforts to conceal the addictive and toxic nature of their products. In 1994, he helped 60 Minutes expose the fraud. The tobacco industry, concerned about the future of their products, attacked. Dr. Wingard elaborates:

My children’s lives were threatened. My marriage ended. I was followed. I was subjected to a multi-million dollar retaliatory investigation and was sued. I had to live 24/7 with armed security forces to protect my family, start my car, or open my mail. I was threatened with criminal prosecution for telling the truth. 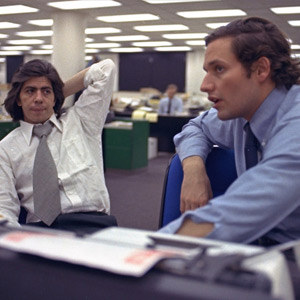 Boys will be boys and politics are nasty, such is what most of us thought when we learned of a June 17, 1972 break-in at the Democratic National Committee headquarters, located in Washington’s Watergate office complex. The thieves were soon arrested, and that would have been the end of that except that the FBI soon connected the wads of cash found on the burglars to a slush fund used by the Committee for the Re-Election of the President (Mr. Nixon). Four days later, the Nixon White House offered, “Certain elements may try to stretch this beyond what it was,” as press secretary Ronald Ziegler stated, dismissing the incident as a “third-rate burglary.”

Two years later, due in part to the work of Pulitzer Prize winning journalists Bob Woodward and Carl Bernstein, and a mystery Whistleblower named “Deep Throat,” we learned otherwise. In an attempt to gain and hold power, Mr. Nixon recorded conversations, turned the FBI and CIA on his opponents, and authorized bribes to get his way. As Woodward and Bernstein wrote in 2012, “By the time he was forced to resign, Nixon had turned his White House, to a remarkable extent, into a criminal enterprise.”

Deep Throat, as we finally learned in 2005, was W. Mark Felt, a high level FBI employee.

We end our account of American Whistleblowers with the story of Daniel Ellsberg. Employed by RAND, a defense contractor, he smuggled classified papers out of his office and released them to the New York Times. The “Pentagon Papers,” as they came to be called, revealed that for at least a decade our government had lied to the American people about the viability of the Vietnam War. Even as we were told it could be won, those in power knew it couldn’t. I had friends die in Vietnam. Ellsberg was arrested, charged with espionage and sentenced to 115 years in prison.

But Richard Nixon’s not-so-White House did not stop there. Two on his staff, E. Howard Hunt and G. Gordon Liddy, broke into the office of Ellsberg’s psychiatrist in the hope of finding damning information. When the case came to trial in 1973, the judge, citing gross governmental misconduct and illegal evidence gathering, dismissed the case. The Pentagon Papers contributed to the eventual downfall and resignation of Mr. Nixon.

Later in the 1970s, “King” Richard Nixon told the newscaster David Frost, “When the President does it, that means it is not illegal.”

Today, in America, India, and other countries in the world, governments have passed laws that protect whistleblowers. No such legalities protected Nader, Wingard, and Ellsberg, leaving all of these highly educated and self-confident men to fight deep-pocketed institutions with limited resources. What chance might the common citizen have against such powerful institutions?

According to the polls, at least a third of American workers say they would be too intimidated and the fear of reprisal too great to “blow the whistle.” On an absolute scale, the number seems depressingly low, but as compared to the rest of the world, it is stellar.

Blowing a whistle in Putin’s Russia is the same as announcing, “I wish to spend the rest of my life in prison.” In some countries, such as Japan and Korea, culture and tradition make it very difficult for a person to shout, “This is wrong.” The German people are reluctant to secretly report abuses, for such were the tactics used during Adolf Hitler’s era to persecute innocent people.

Ek minut, I tell my Bhopal driver, as I grab my camera and exit the taxi. Five drivers and a few other folks had told me that there was nothing to see, but that is not true. I see crumbling ruins and young kids playing and the paint of angry words on a concrete wall and the devastation that happens when the last line of defense fails. A few people stare at me as I wander the area and I want to stop and ask them for their stories and memories, but I can’t. The driver who told me there is nothing to see is now shouting it is time to go to the train station. I nod, take one last look at the devastation and wonder: Would I have blown the whistle?