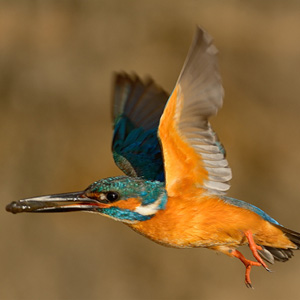 India remains one of the world’s most attractive destinations for avid birders, despite large-scale infrastructure projects and road expansions, not to mention population growth. Here’s a primer for wildlife enthusiasts and travel buffs seeking adventure off the beaten path.

We are in the western part of Gujarat. The salty terrain is flat and barren. Overnight rains have made for the worst driving conditions. As cautious as we were, our small coach gets stuck. A restless group of 20-plus avid birders from five continents pull out their expensive cameras, spotting scopes, and binoculars and scan the land.

Yes, bird watchers are rare breeds, as rare as some of the birds themselves. Plover, Plover! All eyes turn to the side, and the one who shouts keeps crouched and moves forward inch by inch. As the driver works hard to release the vehicle, another enthusiast cries out on spotting the Sociable Plover. 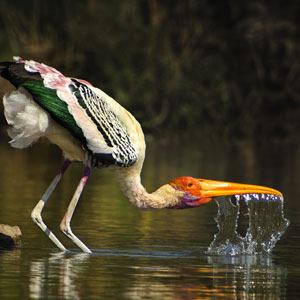 In India, birding has remained unsung even though there are over 1300 species to watch and observe. Unlike the tiger tours, birding excursions hadn’t drawn much interest until recent times. In 2010, Gujarat became the first state in the country to organize the Global Bird Watchers’ Conference. Since then, the event has been attracting thousands of birders and ornithologists from across the world to debate issues of interest, including conservation, and to talk of field-based experiences that help novices.

The bird variety in India is quite extraordinary. While taking quiet walks across South Bangalore or the serene Lodi gardens in Delhi or the bustling metropolis of old Kolkata, spotting more than 100 varieties of birds in a day is not uncommon. Across India, the habitat varies from the cold desert to the salt desert to the sandy desert, from mountains to mangroves, lakes to streams and rivers, rainforest to deciduous and woodland forest, and even urbanized environments where gardens and bushes abound. Birds thrive on innumerable sources of food and habitats ideal for their survival. In some places, they cram together on window sills or gather on thatched roofs. 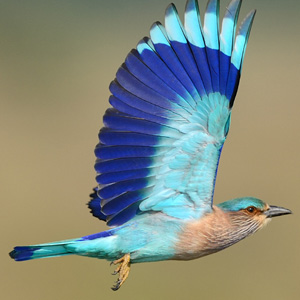 Mogul rulers had explicit interest in the birds of India as can be seen in the incredible artwork depicting the land and the species. In the 20th century, India’s ornithological awareness increased because of the efforts of “the bird man of India,” Dr. Salim Ali. An avid naturalist, Dr. Ali went to great lengths studying birds in the field. His hand-drawn depictions helped birders identify species accurately. Ali’s Pictorial Guide to the Birds of the Indian Subcontinent is considered the primer for bird-watching enthusiasts in India. As a result of his work and influence, a number of Important Bird Areas (IBAs) were identified across the country.

India is one of the 12-mega diversity countries of the world. One can drive past hundreds of villages and paddy fields observing common birds. For the exotic and colorful, my birding journey would begin in Northeast India. Overlooking the Manas River and the peaks of the Himalayas across the Bhutan border, the Manas Tiger Reserve in Assam is a birder’s delight.

A week isn’t enough to spot the over 450 species in this region. It’s a treat to watch the dance of the endangered Bengal Florican, the flight of Giant Hornbills, the colorful Khalij Pheasants, the Asian Emerald Cuckoo, the Rufousnecked Laughing Thrush or the vulnerable Black-breasted Parrotbill. 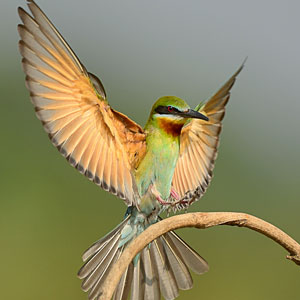 The landscape of Nameri in Assam attached to the Pakke reserve in Arunachal Pradesh is part of the Eastern Himalayan Biodiversity zone. Birders traverse this terrain for its major attraction, the White-winged Wood Duck, as well as the tiny skulking Wren-babblers, Nuthatch, the Ward’s Trogon and the rarely seen Sclater’s Monal.

The Namdapha National Park in the Indo-China-Myanmar tri-junction is a treasure for birders. Some of the prized species here include the Broad-billed Warbler, White-hooded Babbler, Green Cochoa, Pied Falconet, and Blue-naped Pitta, among others. While the endemism of species is high in the region, their conservation is a challenge due to the constant threat to species survival by the local communities. 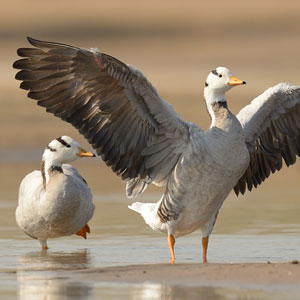 Without question, the Kaziranga National Park is one of the star attractions on India’s wildlife map. A walk across the boundaries of the park is enough to spot more than 100 species. The Swamp Francolin, the Rudy Shelduck, Bar-headed Goose, the Marbled Teal, the Black-necked Stork, and the Black-headed Ibis are only a few of the 500-plus species that the more adventurous may spot in this remarkable region.

When the snow melts on the upper reaches of the Himalayas, few can imagine the pageantry of colors found among the bird species in the cold desert. Passing the high mountain passes of Ladakh, birders are thrilled to see the Black-necked Crane, the Great Crested Grebe, the Himalayan Snowcock, the Tibetan Snowbill and the hovering Golden Eagles. 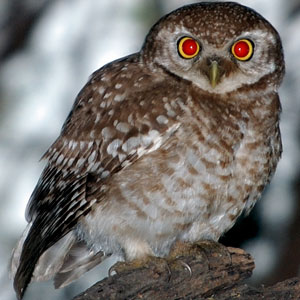 However, true birders don’t stick solely to the mountains and passes. The plains offer equally spectacular birding sites. Corbett, the evergreen hotspot for birding, and surrounding areas can showcase such enchanting species as the Broad-billed Sandpiper, the Marbled Duck, the White-browed Bushchat, the Spot-winged Starlings and the Drongo Cuckoos.

To the west, in the simmering deserts of Rajasthan and the border regions, enjoy the Rufous-tailed Scrub Robin, the Spotted Creeper, the Demoiselle Crane, and the Laggar Falcons. The Little Rann and Greater Rann of Kutch in Gujarat are home to 11 globally threatened species, including the Spot-billed Pelican, the Laggar Falcon, the Merlin, the Pallied Harrier, the Eastern Imperial Eagle and the Red-headed Vulture. Across the brackish waters of the Arabian Sea fly thousands of Lesser Flamingoes and Greater Flamingoes. 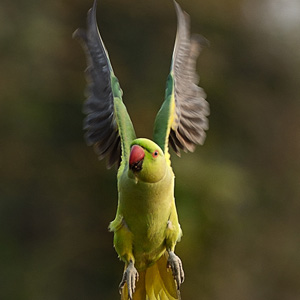 South India and the Western Ghats are a welcome oasis for birds and birders. Blessed with a mix of evergreen, tropical rainforest, and woodlands, the land here offers an altogether different birding experience. From the cool surroundings of Bangalore to the tip of the southern peninsula, through the Nilgiri biosphere and innumerable wildlife sanctuaries, you can see more than 750 species of birds. More than 120 species can be seen in a day in Bangalore. In a few hours’ drive past the city limits, five tiger reserves offer a chance to watch colorful woodpeckers, charismatic flycatchers, engaging parakeets and the curious babblers, not to mention scores of pigeons and treepie.

Despite large-scale infrastructure projects and road expansions, India continues to be one of the most attractive destinations for avid birders in the world. It is not an easy task to pick the top five birding sites for amateur birders, but here’s a list to start with. 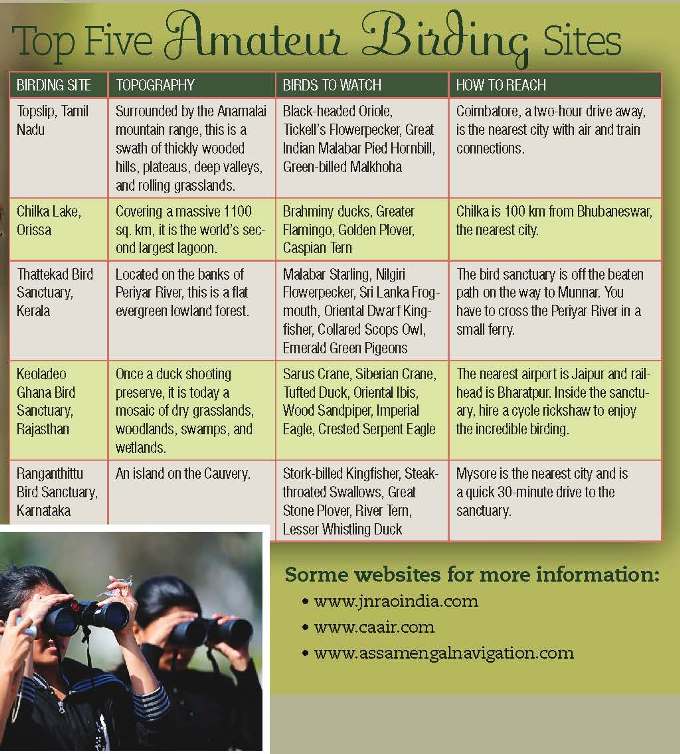 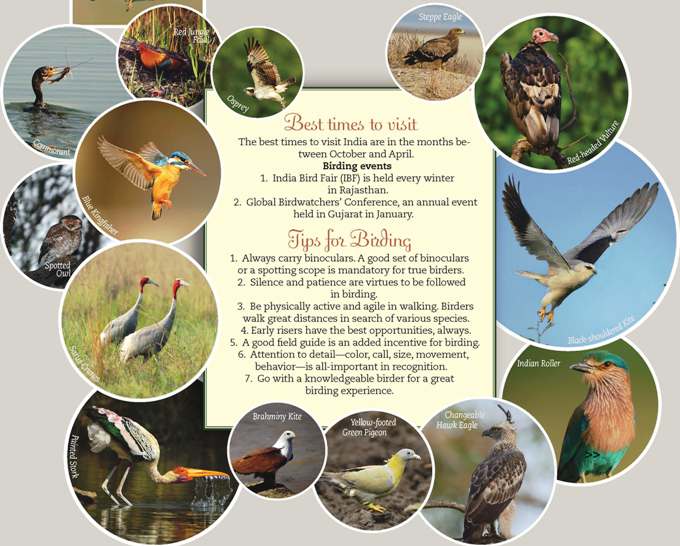 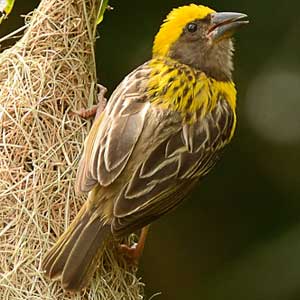 The Baya Weaver bird was described in the year 1590:


The baya is like a wild sparrow but yellow. It is extremely intelligent, obedient and docile. It will take small coins from the hand and bring them to its master, and will come to a call from a long distance. Its nests are so ingeniously constructed as to defy the rivalry of clever artificers.
—Āīn (trans. Jarrett), iii. 122. (ca. 1590) quoted in the Hobson Jobson