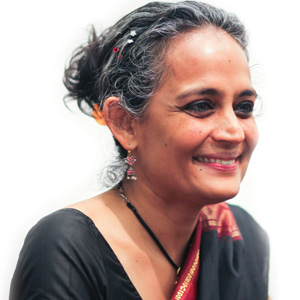 Recently, Arundhati Roy said, “After everything I publish, the first six months I have to duck for cover.” A gifted and provocative writer, the Booker Prize-winning Roy is also a feisty activist who’s not afraid of making powerful enemies. But she has many admirers—and not just among the literati and leftists.

I arrived at the New School’s Tishman Auditorium over an hour before Arundhati Roy was scheduled to appear. Already the serpentine line was winding endlessly outside the hall. Young Indian women, waiting with necks craned for late-arriving friends, stood next to old New York leftists with white beards and young New York leftists with black beards.

Roy is the left’s Ammachi. Her political darshan was worth standing in line for no matter how long. I joined in the wave of applause for the short girlish woman with feathers of white in her signature curly black hair, with two big TV cameras trained on her. I loved The God of Small Things for its weave of lyrical beauty and biting humor, for its commitment to navigating the human landfill separating Touchables from Untouchables.

Roy began her talk, as one might expect, with Antilia, home to India’s untouchable touchable, Mukesh Ambani. The most expensive home ever built. “It has three helipads, nine lifts, hanging gardens, six floors of parking, ballrooms, weather rooms, gymnasiums, six hundred servants. But nothing prepared me for the vertical lawn, a soaring twenty-seven story high wall of grass attached to a vast metal grid. The grass was dry in patches and bits had fallen off in neat rectangles. Clearly, trickle down hadn’t worked.”

In the course of a single observation, Roy was able, by turn, to be tediously factual, literary, and funny. Some Indians see her as a stereotypical radical, overlooking her fierce individualism. In the Q & A session, she was asked what advice she could give American radicals.

She just laughed. “I don’t give advice, and I don’t take advice.”

Roy did not give herself, or her class, a free pass in the course of critiquing her country of 1.2 billion, where “the 100 richest people own assets amounting to one quarter of the GNP.” As one of the 300 million or so well-off Indians who benefit financially from India’s new globalized economy, she readily admits, “we live side by side with the poltergeists of dead rivers, dry wells, denuded forests, the ghosts of 250,000 debt-ridden farmers who killed themselves (she was at The New School to plug her new book, Capitalism: A Ghost Story), and of the 800 million who have been impoverished and dispossessed to make room for us.”

Years ago, when I first heard Roy speak of India’s egregious class disparity, it was not the relevant subject in the U.S. that it has since become. Add to that the environmental dangers of fracking and Freedom Industries’ recent chemical spill in West Virginia, and there is an obvious overlap of corporate environmental crimes in both countries. The centerpiece of Roy’s talk dealt with her sojourn with Maoist rebels in Central India. (Her story appeared in Outlook in March 2010 under the title “Walking with the Comrades.”)

She began by quoting from the piece, telling the audience of the note from the rebels passed under her door in Dantewada, Chhattisgarh. “Writer should have camera, tika, and coconut. Meeter will have cap, Hindi Outlook magazine and bananas. Password: Namashkar Guruji. When a boy with a cap and Outlook, but no bananas, came for her, she asked him, “Where are the bananas?” He said, and one can visualize this in an Italian neo-realist movie by De Sica, “I was hungry and I ate the bananas.”

Roy laughed, but she was deadly serious about the struggle itself. It pitted the government on the one hand in the form of paramilitaries, acting similarly to paramilitaries in Colombia or Peru, burning villages, raping women, clearing forest land for corporate development. (I could see where ordinary decent Indians would rebel against her words. Who wants to think their government would be waging this kind of brutal war, known as Operation Green Hunt, against the poor?) On the other hand, you have armed rebels in the forest, indigenous people trying to protect their land from theft and their way of life from extinction.

To Roy, the rebels’ confrontational political brand is not the point. Her concern is society’s poor, and the question of justice. She brought up the Shakti Mills rape case known to everyone, and mentioned that last year alone 1500 Untouchable women were raped by higher-caste men. Why didn’t the rape of those women get the same attention?

The Q & A period was divided between Roy being asked questions by the author, Siddharta Deb, and by members of the audience whose questions were hand-written. Deb asked her about her latest controversy, stemming from her introduction to Dr. Bhimrao Ramji Ambedkar’s Annihilation of Caste. The speech took her back, she said, “to Gandhi’s views on caste,” which she attacks in Caravan for failing to reject the varna system, despite proclaiming his love for Untouchables and his view that one should be judged by one’s worth, not birth.

“Some people in India said whoever is not a dalit has no right to write about Ambedkar. It’s not a position I agree with,” she said. In her Caravan piece, Roy laments the fact that Ambedkar’s writings are eclipsed by Gandhi’s, Nehru’s, and Vivekananda’s, and that Ambedkar himself is not even graced with an appearance in Attenborough’s Gandhi. It made me wonder if she identifies with him as an unappreciated prophetic voice in India, much like her own.

Ambedkar’s name was invoked yet again when Deb asked for Roy’s response to the banning in India of Wendy Doniger’s The Hindus: An Alternative History because of pressure from Hindu conservatives. The author, who protested the ban, remarked that for all of India’s “song and dance” about free speech, “censorship has been outsourced to the mob.”

It was her opinion that what Nehru said about Kashmir and Ambedkar said about Hinduism would not be tolerated in India today. She failed to mention that what she says about India’s big corporations, and about a government that brutalizes its indigenous people, is out there for all to read. It amused her, and listeners like myself, to hear her speak of her own legal problems arising from The God of Small Things. Five lawyers filed a criminal case against her for corrupting public morals.

“I had to appear in court, by which time I won the Booker Prize. They wanted to claim me and not the book. The judge in the case said, ‘Every time this case comes before me I get chest pains.’”

I was struck by how many of the questions from the audience were requests for advice. Roy has in a sense morphed into a real “Guruji” for some. Her most interesting response, I thought, was to a question about accusations that she was anti-American.

The problem with that accusation, she said, was that “it gives whoever is saying it, the right to decide what is anti-American, or anti-national, and what isn’t. We don’t give them that right.”

I disappeared into the freezing New York night, happy to be sharing the planet with this irrepressible prophet with her blind spots.

New York-based Robert Hirschfield has written for Outlook, India Abroad, Sojourners, and Matador, among other publications.