Youth: A Local Teen in the People’s Republic 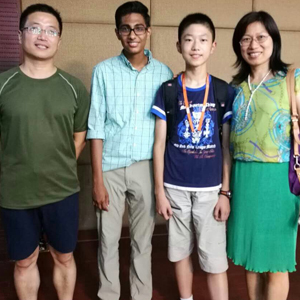 (Left) The author with his host family.

To know a language well is to also know its country of origin. SAMANYU KOTHAPETA, who has been learning Mandarin since sixth grade, recently won a U.S. State Department youth scholarship to study the language further at Nanjing University in China. He shares his experiences.

The program I enrolled in at Nanjing University was the most advanced course in Mandarin, and I was placed in a mid-level language class. After overcoming jet lag and losing my way several times in the subway station during my daily commute, I eventually began getting used to the Chinese way of life. Subway security was more than helpful to this lost Indian-American. Slowly but surely, I learned to use chopsticks and try various Chinese delicacies.

It all began with a flight from Atlanta to Washington, D.C., in late June. An unfamiliar face, who would later turn out to be my resident director in China, greeted me at the airport. As I waited for my baggage, I started meeting the other participants arriving from various corners of the country. Over the next day, we attended orientation sessions on living with host families, health and safety, rules—and practiced a bit of tai chi, and even heard from the program’s alumni about their experiences. Imperceptibly, we were all bonding for our six-week stay in Nanjing.


The next day, as the long flight from Chicago was about to land in Shanghai, I couldn’t miss noticing how different the sky looked. It was hazy and grey, unlike the blue sky I was used to. After picking up our bags, we got on a bus for an eight-hour drive to Nanjing. We spent the bus ride playing games and getting to know each other. Arriving at a hotel in Nanjing, we were greeted with an assortment of Chinese dishes.

The following day, after a trip to the bank to exchange our dollars for the Chinese renminbi, we met our teachers and got ready for classes. Then we were introduced to our host families. My host mom and dad worked in the Chinese Civil Service and were genuinely warm and gentle. I also had a 13-year-old host brother with whom I shared a bunk bed in a bedroom on the 30th floor of an apartment complex.

My host mother rode a scooter to work while my host father and I took the subway to work and school, respectively. My host brother biked to school. It was my first time riding a subway and I found it very clean and safe. It was always crowded, and I traveled standing every day.


A typical day at school started at 8 a.m. Class instruction included two teachers—one for speaking and listening and the other for reading and writing. Lunch on most days was at the cafeteria on the university campus, which also had a convenience store. We ended up buying plenty of souvenirs and apparel. At times, we frequented nearby restaurants for lunch. After lunch, we walked around or played Frisbee.


Culture class or a group excursion followed lunch. The class involved calligraphy, folk singing, seal cutting, aerobics, or tai chi. We also visited museums and other historical sites. By the third or fourth week, my host brother became comfortable enough with me to play phone games or basketball with his friends. On some evenings, my host family and I would engage in a four-player Chinese board game. Despite homework and assessments, every day was fun and stress-free. My weekends with the family were spent sightseeing, hiking on the Purple Mountain, visiting a culinary school, etc. My most memorable trip was walking to the top part of the city wall and visiting a Buddhist sanctuary.

Soon, it was our last class. We had our final exams and then rehearsed for a Chinese play, which we performed for our host families. After the play, our host families and we students were presented with certificates of completion of the program. Emotions ran high after the function, with everyone taking pictures with their host families and teachers.


I spent the last day in Nanjing visiting a science museum and an arcade with my host brother. Soon, it was time to bid farewell and leave for the Shanghai airport. It was just as difficult to part ways with my fellow students after landing at the San Francisco airport.

The Chinese are extremely hardworking, and the society places a high value on education. China seemed to be practically crime-free. While many goods were inexpensive, their quality was questionable at best, I thought. On the whole, I had a very rewarding trip. Not only did I improve my language ability greatly, but I also made friends and memories to last a lifetime.

Samanyu Kothapeta is a senior at Northview High School in Johns Creek, Georgia.