Youth : Beyond the Trinity of Indian Careers 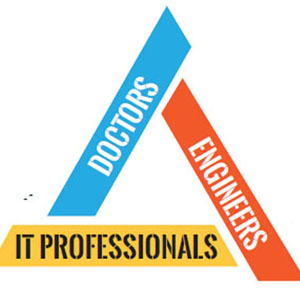 While Indian parents try to look out for their children’s “best interests” by insisting on stable career choices, they need to realize that children need to learn and grow from their own experiences—mistakes and all.

Doctors, Engineers, IT professionals—these are all careers which are thrust upon Indian kids by their parents. This holds true not just for parents in India, but for immigrant parents everywhere, including those in the United States.

I see many Indian kids in my high school being pushed into studying medicine or computers. As I came to realize this practice, I began to wonder why are parents so concerned that their children not stray from this path? Why do they frown upon every other career that they consider irregular, and why do they insist on just these few careers? Do Indian parents hate all fields of study other than these special three?

I think if their kids chose to pursue something related to science, that would make most parents satisfied with their children’s careers. But what if one were to go into something like art? I am sure many Indian parents would see that as an absolutely blasphemous career! High risk and the money isn’t all that good either, they would reason. To them, an occupation like an artist is almost laughable. Compared to a high-earning, hardworking, and stable profession like an engineer, why would anyone even think of doing something remotely related to art? And so naturally, “Why bother?”

Why bother wasting time with a career that has limited job openings? Why put all your eggs in a basket that has holes in it to begin with? These “holes” are the exact things Indian parents want to make sure their kids steer clear of. There are three main holes in the basket of irregular jobs: low income, limited job opportunities, and opinions being pushed onto parents themselves from their own families and friends—all of whom form part of the “people” that parents must contend with or else “what will people say.”

As having a career in the medical, engineering, and computing is very kind in pay, many Indian parents have a hard time accepting that their child has an affinity for a job in which the salary isn’t as high as those three. This is because these parents have never known jobs and careers as more than a way to earn money and provide for a family. They don’t realize that a job can be so much more and mean so much more. So, when they see a job in which their kid has taken interest, they want to make sure that the career path leads to money and if not, they try to push them to change paths to one that does.

The second so-called “hole” in the basket of irregular jobs is the number of job opportunities that are available in that career choice. Usually, careers that please Indian parents have high demand, and minimal job-hunt. Take doctors, for instance. The demand for at-home physicians is increasing in unheard of amounts due to the graying of America (the aging of baby boomers). However, the same cannot be said of a career like acting. An actor has to work tirelessly, make calls day and night, and try to get parts in the smallest of plays just to make a living. In fact, the percentage of actors who are able to make a stable living off acting against those who don’t live with that luxury are 2:100, according to The Guardian. Just think about it: for every 100 hopeful actors, only two are able to eke a living out of it. This is exactly the reason why Indian parents don’t feel comfortable with letting their kids choose their own careers.

However, this doesn’t mean that they are right. It is true that they could be saving their children from being one of those 98 who don’t make it, but they could also be limiting their children and preventing them from becoming those select few who really do make it onto big stages. It may be risky, but what is life without some risk?

The last and maybe the most powerful reason why Indian parents restrict the career choices for their children is that they themselves have family and friends who feel it would be an act of irresponsibility to let their kids choose their own careers when the jobs they choose have a low salary and less number of job opportunities. Though it is not a consideration in my family, I have heard stories from many friends of how their grandparents and relatives back in India pressurize them to stop “thinking so foolishly” and go for a secure job. I can imagine that a lot of that pressure must be on the parents’ shoulders as well. It made me think that maybe some of the parents want to let their child do what they want to do with their careers, but their hand is forced because of the immense backlash and chastisement they would get from their own parents, or perhaps even from other relatives and friends.

The infamous “log kya kahenge”—“what will people say”—is so deeply rooted in Indian culture that many give up on their dreams before they even begin.

The stereotype of Indians becoming doctors, IT professionals, and engineers is very real. A lot of it stems from how Indian kids are forced to follow one of these paths, whether they like it or not. While there are reasons why Indian parents do this, but they need to let their children have more freedom when it comes to choosing their own majors and careers. After all, it is not the parents who live a kid’s life. As they grow up, the kids need to find their own path and learn from their own experiences to grow as independent individuals.

Abhinav Iyer is a high school honors student at Chattahoochee  High School, Johns Creek, GA. Besides a deep engagement with writing poetry and composing/playing music, Abhinav has been an active volunteer with Vibha’s Atlanta chapter, Beta Club, and HOSA (Health Occupation Students of America). He is currently an intern at Khabar.