Youth: Four Grandparents, Many Bedtime Stories, and a Lifetime of Memories and Lessons 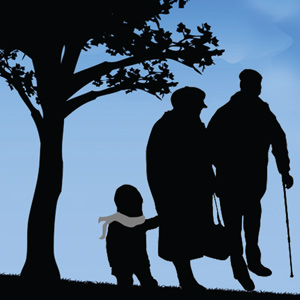 “Tell me a story,” I pleaded, and she sat on one end of my bed as her hands sank into a gentle rhythm between my shoulders, tapping me to sleep. In crisp Tamil, Anapati, my maternal grandmother, transported me to the land of gods, kings, and demons. Her depictions danced through my dreams and colored my imagination, creating a world that existed only for the two of us.

My grandmother knew how to spin a fairytale. Her “princesses” wore mundane clothes and wielded such an enchanting goodness that they were able to make extraordinary things happen around them. The happy endings to her stories didn’t rely on magic, but on the more invaluable forces of goodwill, generosity, and righteousness.

A few days after she spun a tale about a child who was rewarded for his honesty, my cousin Sonali was pulled over on the highway on our way to dinner. My 8-year-old heart raced in the backseat as the officer approached our car and signaled for her to roll down the window.

“Ma’am, do you know what the speed limit on this highway is?” he asked her, after the usual formalities. Yes, she knew the speed limit was 65, she responded, and she was extremely sorry that she was driving at 70, but she would make sure to be more ...

The stunned silence that followed was broken by my cousin’s pronounced scowl in the mirror, and an emphatic chuckle from the officer, who ended up letting Sonali off the hook with only a warning, thanks to “the youngster in the backseat who knows how to tell the truth.”

It is evident to me now that through the moral groundwork of her tales, my grandmother sought to make me a better person. She never once told me to “tell the truth” or to “respect my elders,” but then, she never needed to; her bedtime stories ingrained those values more powerfully than simple reminders ever could have.

My maternal grandfather’s stories were a little different. When Anathatha, as I called him, came to tuck me in at night, he would lean, dejected, on my bedside table and look at me apologetically.

“Sorry Anix, I just can’t remember any of my stories right now. I don’t know what happens every time I come in here at night, but they all just seem to run away somewhere!” he once exclaimed.

“How about you make one up right now?” I suggested between giggles.

“I’m not sure if I can do it by myself though,” he responded with a wink. “I might need a little bit of your help.”

On some nights, we would ramble about the adventures of strange creatures we concocted, limb by limb. On others, we would jointly muse about what we would do if our house turned into a giant sailboat overnight and we found ourselves in the middle of the Pacific, or out near Alaska.

No matter the subject of our fictional tales, those nights with my grandfather were filled with peals of laughter that ricocheted off my lilac walls and cocooned my thoughts as I drifted to sleep. On days when I would arrive home from school downhearted, my grandfather would remind me of Scout, the half purple, half orange sea turtle, whose birthday party we had narrated together five different times, or of the mysterious treasure we had decided that we would find off the coast of the Marshall Islands. We both came to realize that even the memories of these stories could conjure a broad grin on the grayest of days.


Oopati, my paternal grandmother, told me stories that were as mesmerizing and peaceful as Anathatha’s were enlivening. A devout Hindu, she carried a small, yellow copy of the Bhagvad Gita with her when she came to my room, and often lulled me to sleep with verses from the epic, sometimes reciting the muted Sanksrit vowels till long after I fell asleep. Many mornings, I would wake up to her ancient chants, resounding throughout the house, as a sort of morning song to set my day’s rhythm from the moment I climbed out of bed.

My grandmother became my connection to faith, the reason why I carried a small idol of the Hindu god Ganesha with me to my dorm room each September, and the reason why I capitalized the “G” in God. Her nighttime explanations about the meanings of various chants, and the strength that they were meant to evoke, have grown to make more and more sense over the years.

The fourth and final piece of my bedtime mosaic is my paternal grandfather Oothatha, who is very much a morning person, and generally prepared to retire for the day at around 8 p.m., a full half hour before my childhood bedtime.

We sat outside, munching, as my grandfather took us back five or six decades in time, to the outskirts of his hometown in Malaysia. He invited us to join him as he fished for massive black groupers in the South China Sea, hacked his way through cabbage palms to reach the small coconut grove at the center of the Batu Dua Forest, and learned to play rugby with boys six years older and five times heavier than himself. His vital propensity for adventure and excitement was sprinkled into these thrilling tales, and my sister and I glanced knowingly at each other during his thoughtful pauses, wondering if he might be wishing that he was 15-years-old and carefree again, out in the Malaysian wilderness.

“Once you hit a certain age, there are a lot of things you just can’t do yourself. You have to live vicariously. And that’s why we have these things called grandchildren,” my grandfather reminded me, as I left for my term abroad at Island School three summers ago. My fingers nestled in the ridges of his palms, Oothatha made me promise that even without Internet access or my cell phone, I would still find a way to share my island experiences with him from time to time. My other three grandparents insisted the same.

So, two weeks into my term on Eleuthera, in the Bahamas, I found myself sitting in the communications office during my 20 minutes of weekly phone access, struggling to convey the past 14 days of foreign foods, midnight snorkels, and marine ecology classes to the four pairs of eager ears on the other end of the line. Three minutes passed, then five, then eight, and with ten minutes left of my precious phone time, I sighed in frustration, realizing that I had only managed to convey a single day’s worth of experiences.

“I have so much to tell you and there’s only ten minutes left!” I yelled frantically.

“Anix, why don’t you just tell us a story,” my grandmother coaxed, and as I settled back into the comfort of her voice, the words, and excitement, and adventures, and emotions, came tumbling out, with all the sand and sweat that they were made of.

At my grandfather’s suggestion, I kept a journal throughout my term on Eleuthera, and I began to tell my own stories every night.

As much as I tried to convince myself that these daily accounts were meant for my own pleasure and remembrance, it was impossible not to narrate my early morning free-diving expeditions without adding in details I knew my grandfather would relish, or to describe the Bahamian cultural festival of Junkanoo without automatically thinking back to my grandmother’s narrations of Holi, the Hindu festival of color. My journal entries quickly evolved into short vignettes that I tailored for each of my four grandparents, and those vignettes were soon transcribed onto loose sheets of paper (with cassava chip crumbs still lodged in the folds), sealed into envelopes, and sent out across the Caribbean, and then across the country to California. Where verbal communication fell short, these letters filled in the holes.

I had expected the perfect tone, and the perfect phrasing to cascade onto the pages of my place-book when I started writing each night, but it was clear that while my grandparents’ storytelling had seemed so effortless, it actually required great focus and persistence. I never knew exactly what words and images would resonate with each of my grandparents, but I took my chances, encouraged by Anathatha’s quote from one of his favorite poems, “Spelling” by Margaret Atwood, “After all, ‘a word after a word, after a word is power.’”

Anika Ayyar is a sophomore at Duke University studying computer science and bioinformatics. An ardent lover of adventure, she earned her scuba certification, completed a four-mile open-ocean swim, and conducted research on patch reefs and fisheries conservation during her time at The Island School in Cape Eleuthera, Bahamas. Source: India Currents.