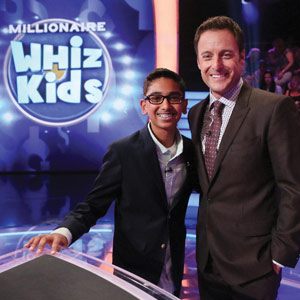 A bundle of curiosity, energy, and passion, 15-year-old Georgia resident Naman Shah did his family and community proud when he was selected as a contestant for the TV quiz show Who Wants to Be a Millionaire?Khabar documents his journey to the show’s ‘hot seat’ and his experience of this once-in-a-lifetime event.

February 13, 2017, was the proverbial red-letter day for the Shah family, who live in Peachtree Corners, GA. Indeed, it was a special day for Georgia’s Indian-American community when young Naman Shah, an 8th grade student, walked into the national spotlight as a contestant on the popular TV show Who Wants to Be a Millionaire?–Whiz Kids and won, besides a hefty prize, our hearts and minds as well.

Naman’s story begins in Singapore where he was born to Dipa and Mehul Shah in 2002. The Shahs moved to the U.S. when Naman was a toddler. Mehul is an IT executive while Dipa is a multitasker—civil engineer, event organizer, and marketing professional with a penchant for dabbling in Gujarati poetry! The Shahs have an elder daughter, too, Vishwa, who currently studies Business Technology at Gwinnett Technical College.

Naman has always been an exemplary student—math and science are his favored subjects—and he won the Presidential Award for Academic Excellence at Berkeley Lake Elementary School. In 7th Grade, Naman took both old and new versions of SAT tests, scoring an impressive 1520 and 1190, respectively.

He was part of the team that won the Georgia qualifier for the US Academic Bee and Bowl National Championship and then came in 8th in the nation. In 2015 and 2016 he won the Gwinnett County PTA Reflections competition. With superlative learning skills, an inborn curiosity to know more, and a can-do attitude, it’s no surprise that he made it to a hugely popular TV quiz show. How did he learn about the show? “Through the Duke Tip program. They contacted students who had received a certain score on their SATs and my family and I responded,” says Naman.

Numerous tests, auditions, and interviews followed to select a chosen few from among 10,000 candidates. Naman recalls those weeks from the time he applied to participate in the show. “I was happy and proud that my score was high enough to be considered as a contestant for the show. To be honest, I wasn’t extremely confident as to whether or not I was going to make it, but I knew there was a small possibility of me making it to the selection.”


His reaction, when he came to know he’d been shortlisted to appear on the show was understandably delirious: “I was ecstatic and I couldn’t believe it. It was a crazy opportunity that not many people could receive.” And just like that, Naman found himself in Las Vegas, on the famous ‘hot seat’ of Who Wants to Be a Millionaire–Whiz Kids, hosted by ABC’s Bachelor show host Chris Harrison. While Naman’s mother Dipa and elder sister Vishwa were in the audience to support and cheer him, dad Mehul was Naman’s choice for his “Plus One lifeline” (an individual of the contestant’s choice who can help him answer one quiz question).

Going on the set was a whole new experience for this bright eighth grader. “My mind was blown as I walked onto the set. I had been watching the show extensively before my episode was being filmed, and it was very freaky to be on the set that I had seen so many times on my TV. The set was honestly very cool and I am glad I got to be on it.” And what about the show host? “My interactions with Chris Harrison, while minuscule, were very fun. He was a cool host and made the show ten times better.” 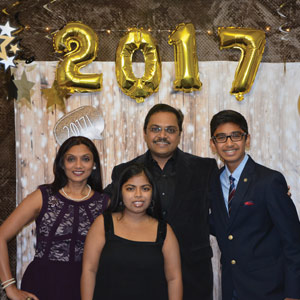 Naman’s session started well and he handled the first few questions with ease—clearly, no butterflies in the stomach for this confident youngster! “I was surprisingly calm during my session. I didn’t feel nervous or scared. I enjoyed it a lot while I was up there,” he recalls. His rapid progress even won him a compliment from the host: “I can’t think of a question tough enough for you! Great things are coming your way,” quipped Chris Harrison, much to the Shah family’s delight. Progressively, the questions got more complex.

Then came “Parthenogenesis, the means by which some all-female species of whiptail lizards reproduce, loosely translates to what in Greek?” Naman turned to his father for a ‘lifeline.’ When he answered, “Virgin creation, or birth,” a hush descended on the studio set—the show host’s trademark strategy to keep the audience on the edge of their seats! Finally, Chris broke the silence proclaiming jubilantly, “Your answer was right! Good team work!” As waves of applause swept forth, Naman and his family were wreathed in smiles—no doubt, a moment that will be recalled for years by the Shah family!

All good things must end, and the next question from Chris Harrison proved too much of a toughie. But here, too, Naman displayed a wise head on his young shoulders. Rather than gamble away his earnings with a guess, he decided to call it quits and walked away with a cool $20,000.

Back in familiar surroundings, the celebrations continued. Naman became an overnight celebrity at Duluth Middle School, which lauded his accomplishment with a huge board that read “Congratulations to 8th Grader Naman Shah, a Winner on Who Wants to Be a Millionaire–Whiz Kids.”

As exciting as the Millionaire interlude has been, Naman isn’t exactly resting on his laurels. “I still have a couple of Quiz Bowl tournaments before the end of the school year. I am [also] in the running for this year’s state competition for the PTA Reflections,” says this indefatigable seeker of knowledge.

Is there a formula for this kind of early success? Arguably, luck does play a huge role in events like these. That said, Naman’s journey leading to the sets of Millionaire has several pointers for the many children he will inspire (and their eager parents, doubtless!). Apart from excelling in studies, Naman is blessed with a curious, enquiring mind and a flair for innovation and creative work that his parents have encouraged and fostered. Mehul Shah recalls, for instance, how, from a young age, Naman would fill sketch books with pictures of the many inventions he plans to design when he grows up. This passion for exploring the world of knowledge has translated into his participation in a range of learning-related programs. Naman is a member of or participates in National Junior Honor Society, Academic Bowl, Junior Beta Club, Kiwanis Kids, Science Olympiad, has taken accelerated subject classes, and is in the STEM program (Science, Technology, Engineering, Mathematics).

Importantly, Dipa and Mehul Shah don’t buy into ‘tiger’ style parenting, preferring a more relaxed and supportive way of bringing out the best in their children. Like kids his age, Naman enjoys a host of activities: video games, listening to music, picking out tunes on a piano, watching sporting events on TV, making origami, and reading popular fiction (his favorite authors are Gordon Korman, J. K. Rowling, and William Golding).

Playing out one of his creative pranks: a Halloween costume that Naman designed.

Naman also enjoys a game of tennis now and then, for fun rather than competition. And the family says there’s nothing that gives him more happiness than expertly pranking elder sister Vishwa!

When time permits, Naman offers his support to a host of outreach programs: Child Rights and You (CRY), Water.org, Bill and Melinda Gates Foundation, and some local charities. The family has a tradition of reaching out to those less fortunate: Naman’s grandfather in India runs a school for deaf and dumb children, an initiative that Naman is involved in, too.

Is there a role model who’s deeply inspired him? Yes, Bill Gates, but not for the reasons you’d assume. “He has amassed one of the largest amounts of wealth in the world while still being one of the largest philanthropists. I would like to gain success and help people while doing it.” Naman’s goal for the future lies in getting into a medical field. Wisely though, he observes, “We will have to wait and see as to what happens in the future.”

This maturity also comes through when he’s posed the usual question that whiz kids are asked—advice to parents! “My advice to parents would be to not force your kids to do something they don’t like. They won’t enjoy it and that time will be wasted. Instead, sign them up for things they do enjoy, then these activities will become play. Another piece of advice is to not participate in so many things that you can’t handle the workload you would have otherwise. You have to find that balance that is manageable for you. For me, I am able to handle a lot of work while still being busy with other activities. For others, it may be a different story, so it all depends on who you are.”

As to the all-important question of what he’d like to do with his prize money, Naman is very clear that he will set aside most of it for higher education, while also donating generously to his favorite charity. A whiz kid with his heart in the right place—more power to you, Naman!